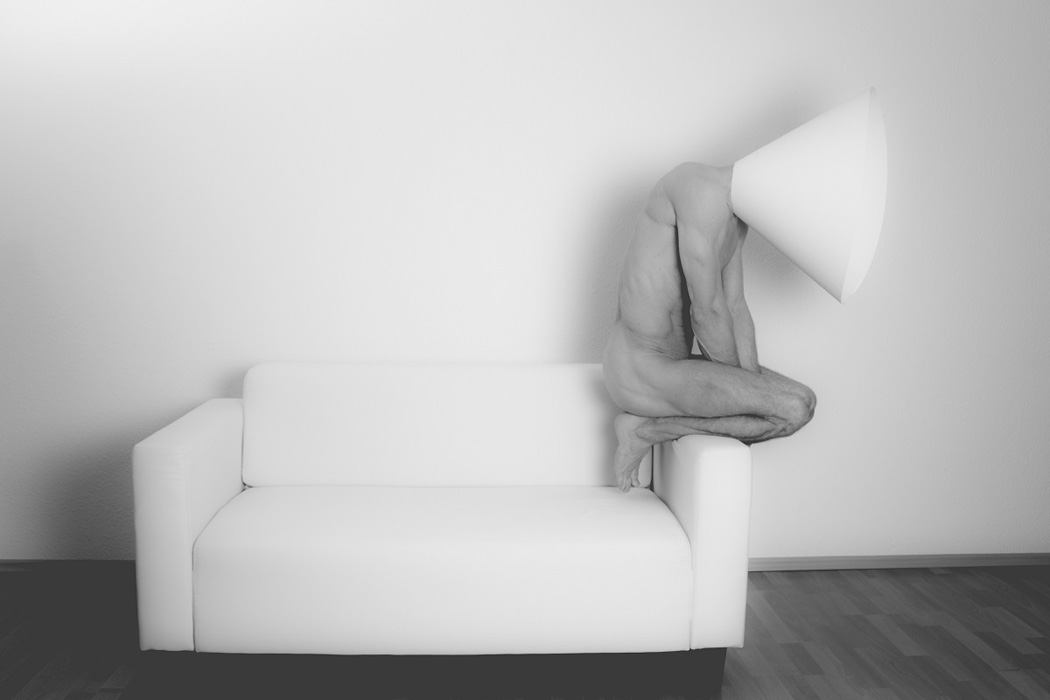 Dirk H. Wilms is from Germany, and works as a photographer and visual artist. His personal work has focused on self-portraits since 2001, the year he received his HIV diagnosis. The first few years after his HIV diagnosis he barely left his house. He was afraid to go out for almost four years. He thought everyone who sees him out there must know immediately that he carries the virus in me.

But he did not want to be forgotten. He wanted people to know after his death that he was in this world. And so he decided to start documenting his life, his fears and his physical decline in an artistic style. He was able to photograph and stay at home at the same time. The first traces left by this virus were to be seen on his face. Thus the stylistic idea came to cover his face on most of the photos.

Artist statement:  “I remember very well the carefree days in my life, when I awoke shortly after the sunrise, to catch some new moods with my camera on the beaches of the North Sea. I loved those days there by the sea, running barefoot through the sands, feeling the warmth and the easiness. I loved to be outside in nature, and to be by the sea in particular. Even as a child I felt this strong affinity with the sea. It was a perfect life, it was my perfect life, and it should never end. But everything changed in the winter of the year 2001 with my HIV diagnosis. After this everything was different. Nothing remained as it was. From the beginning I thought it would be better to be honest about the infection by not lying to my friends and family.

That was a big mistake. Since the beginning of time people do not want to tolerate the truth. So most of my friends left me because they were afraid of me. Me, the Monster with the deathly virus. (Later I realized that they were not afraid but rather very ignorant.) I didn’t get any more photography assignments, because my customers would not take the risk. (Later I realized that they were not risk averters, but they also were rather very ignorant.) So the first years after this cold season I barely left my house. I was afraid to go out for almost four years. I thought anyone and everyone who sees me would know immediately that I carry the virus inside me. The palish monster decided to stay at home. But I did not want to be forgotten. I wanted people to know after my death that I had been in this world. As I love art in any form, I decided to start documenting my life, my fears and my physical decline as an art form in itself. So I began shooting myself. Susan Sontag once said, that the world is a range of potential shots. And in my new world there were the rooms in which I lived. I was able to photograph and stay at home at the same time. I became the range of potential shots. Because the first traces left by this virus were to be seen in my face, the idea was to cover my face on most of the photos. I do that mostly even today, I’m still afraid of not being loved, because I wear AIDS in my face.

When I take my images I forget the time of day and all of my problems. It is as if I‘m in another dimension, as if I’m back by the sea, running barefoot through the sand and catching moods with my camera. The difference is that I do not photograph beach scenes but my body, as it is today. For me, photography is not the camera (anyway I’m not interested in the technology and its infinite possibilities). To me photography means to breathe life and to express myself. Photography helps me to make my fears, my depressions and my nightmares visible to those who care to see. I think, through photography I have learned to deal with my disease and to accept it with all its facets because I chose it deliberately to let it be the core of my artistic work. I have given myself the order to accompany the camera until the end. A task that will keep me busy for quite a while. Would someone ask me today whether art can save lives, I would answer, for me most definitely. ” Published in SLAVE MAGAZINE, Issue 13 / 2014 Source: www.dirkwilms.com/about.html