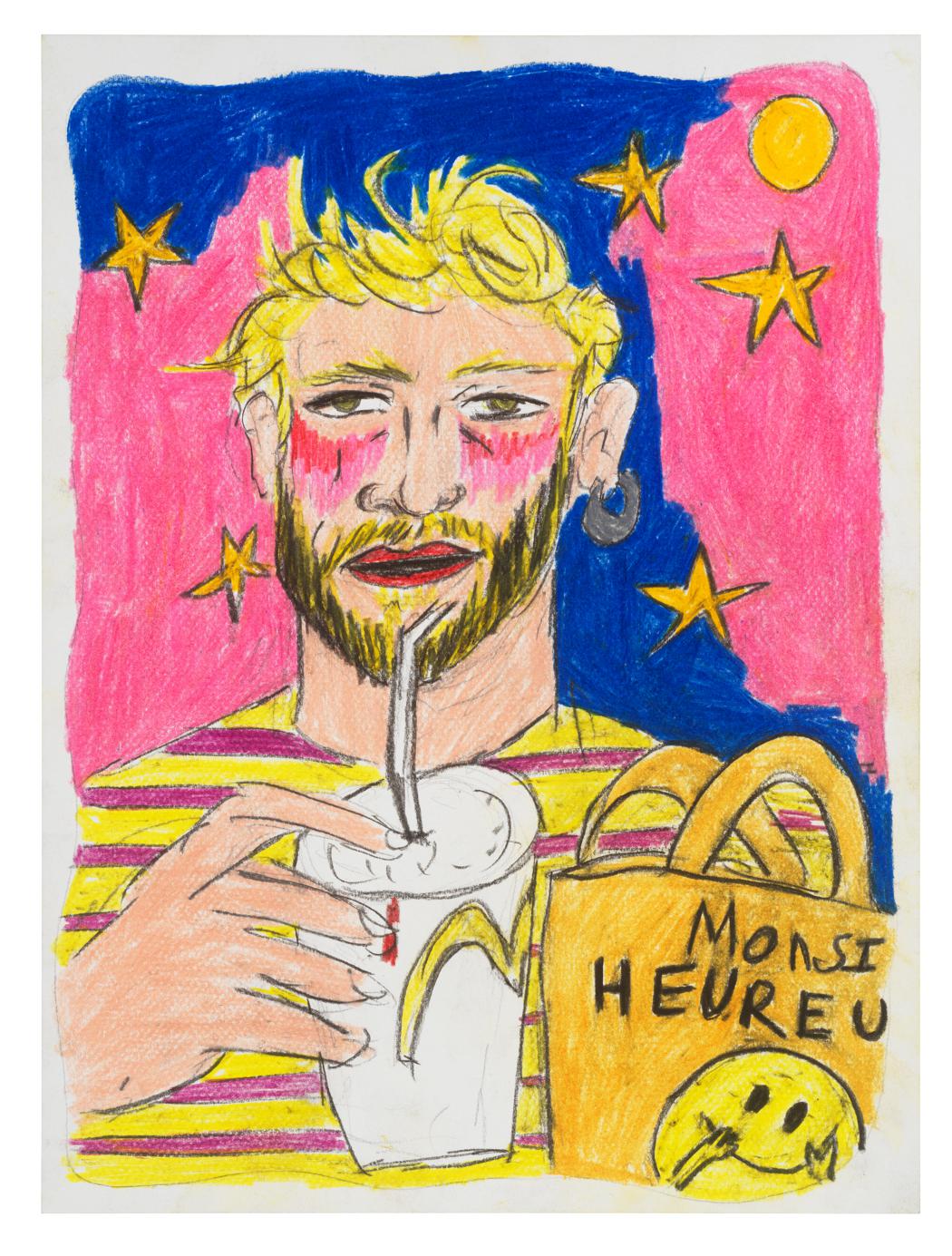 Berlin! This Friday November 08th, from 6 to 8pm, DITTRICH & SCHLECHTRIEM are pleased to present their first solo exhibition with Soufiane ABABRI (b. Rabat, Morocco, 1985), “SOMETHING NEW UNDER THE LITTLE PRINCE’S BODY”. Installed over various tones of flesh-painted walls, the exhibition features a new body of figurative colored-pencil drawings prompting a discourse on sexuality and interracial love among postcolonial-era gays. Ababri, who often stages interventions or workshops, activates the exhibition on opening night with an accompanying performance in the gallery, initiating the relationship and narrative between the Prince and his new lover and featuring body-to-body movements, song, and texts.

“Framed by Antoine de Saint-Exupéry‘s 1943 novella “Le Petit Prince,” Ababri’s exhibition asks the challenging question of what would have happened if the Aryan-alien blond Little Prince, after arriving on Earth, had met and fallen in love with an Arab man. Saint-Exupéry’s Buch is generally read as a literary fable about friendship and humanity, a critique of the decline of moral values in Western society. Having touched down in the northern Sahara, his Little Prince encounters only the French narrator, whose plane has crashed, and mystical speaking animals—but no natives. It is interesting to note that Saint-Exupéry, a pilot by training, was the station manager of a stopover airfield in Tarfaya in southern Morocco in the late 1920s; as part of his job, he was involved in armed altercations with rebellious Berbers. The hypothesized erotic relationship between the blond Prince and the Arab mirrors the history of immigration to Europe and the struggle of the gay movement in late-1960s France from the complicated and rarely considered perspective of a contemporary gay Arab man.

„Please … could you draw me a sheep!“ That is the famous first sentence the Little Prince addresses to the sleeping aut-hor in Saint-Exupéry’s version. In Soufiane Ababri’s drawing series, his wish comes true. Yet the sheet is held by a naked, hairy, “brown” body. And where one would expect to see a sheep’s head, the gleaming head of a penis juts out from the wool, as an erotic allusion to circumcision, halal slaughter, and sacrificial rites. But who is sacrificing himself to whom in this scene? As the exhibition’s title suggests, the question of dominance is indeed operative: Which body lies under which other body, who fucks whom—or who desires to be pene-trated by whom?

Ababri equates sexual with cultural dominance and submission. That he as an artist would also construe an inextricable linkage between the histories of postcolonial and homosexual as well as feminist liberation, effectively declaring the one form of freedom to be dependent on the other, might seem odd given the oppression and persecution of gays and women’s rights activists in the Maghreb. It is less odd when one considers the fact that modernity and postwar modernism were not a European project alone but also an African one, that the biased projections of the former colonial powers must be countered by a new canon, a new narrative—an insight that has long become accepted in the art context. Still, in broaching the question of the emancipation of Arab and, ultimately, also of European gays from racist role models, Ababri is an absolute pioneer in the art world. He adopts a position of emphatic powerlessness to tell stories of violence, domination, and marginalization. Quite literally—homosexual acts are still punishable by law in Morocco, homosexuality is virtually nonexistent, and openly gay men are few and far between even in the arts scene. To date, the writer and director Abdellah Taïa, who lives in exile in Paris, remains the country’s only openly gay intellectual.

“Bedworks” is the collective title that Ababri, who lives between Tangier and Paris, has given to the drawings. Since 2016, he has made a habit of working while lying in bed—his rejoinder to the history of European painting from Orientalism to modernism, which rendered women’s, as well as exotic men’s, bodies as “odalisques”: sprawling on a divan like harem slaves, available as objects of desire. Many artists of his generation resort to video, performance art, or sculpture; Ababri, by contrast, signals his rejection of the academic canon by devoting himself to drawing as an intimate and expressive medium. Not having a studio and buying his pencils at the supermarket are conscious choices that match his straightforward and regressive graphic style, which brings outsider art, graffiti, doodles, or old porn magazines to mind. The attitude of Ababri’s drawings is pointedly camp. The poses and colors are extroverted and stylized, the constellations in the pictures are reminiscent of 1950s melodramas, but also of Fassbinder’s early films or the exaggerated choreographies in Claire Denis’s Foreign Legion drama “Beau Travail” (1999). 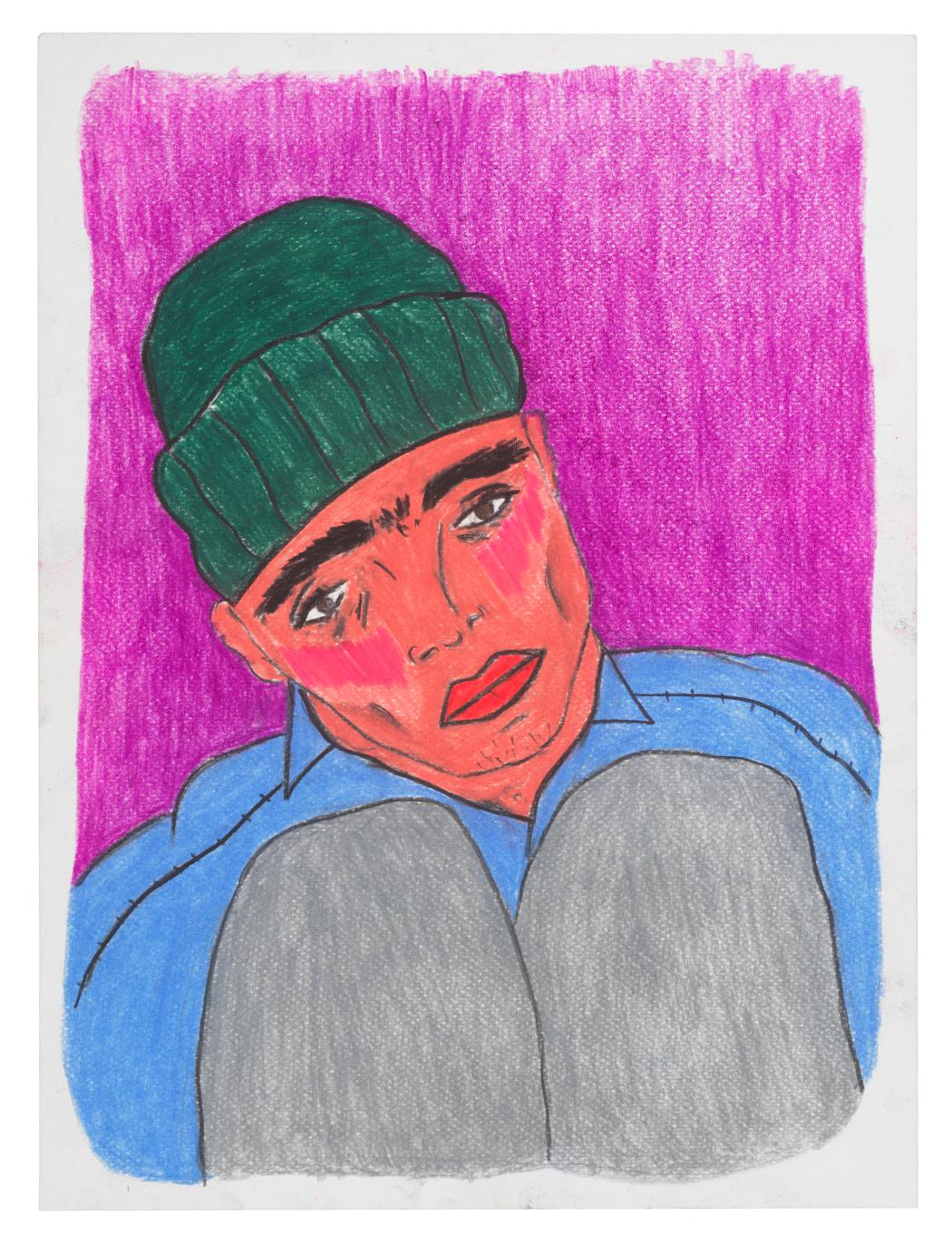 Because Ababri draws lying down, with the paper on a board, everything in his pictures comes out equally flat and without perspectival depth, equally meaningful or meaningless. And yet there is something enormously physical about the works, an impression heightened by the color of the wall on which they are presented in the exhibition. The artist chose a powdery flesh tone of the sort found in pantyhose, underwear both erotic and orthopedic, band-aids, and makeup, a hue that prompts associations of skin, lesions, cosmetic camou-flage. In the show, all visitors and the performers are bathed in the light of this “white” skin tone, which comes to be un-derstood to be the Little Prince’s.

What is more, the men in Ababri’s drawings always have rosy cheeks, almost as though they had applied rouge. This conspicuous “blush” marks the instant at which the other’s desire is recognized and the subject loses control of his body, of representation. The same can be said of the picture itself, which, in the conventional understanding of art, is supposed to arouse desire but remain forever passive, stuck in a feminine role—as though it did not perceive or return the beholder’s gaze.

Ababri shatters these conventions. His drawings know that they are being looked at—and so do the men who perform in them. What is less clear is whether their loss of control leads to (potentially consensual) violence, sex, or intimacy. At the same time, Ababri shows the Arab male body in passive, vulnerable, and autoerotic positions, indirectly alluding to the leftist wing of the gay movement and the role of the “front homosexuel d’action révolutionnaire” (FHAR). In the early 1970s, this group around the writer, philosopher, and activist Guy Hocquenghem responded to the Algerian War by calling for sexual encounters between French gays and Arab men, which they believed held emancipatory potential. By allowing themselves to be penetrated, FHAR claimed, white Frenchmen enabled their “Arab” partners to avenge the suffering that France had inflicted on their countries of origin. This argument, however, enshrined its own racist fetishizing view of the Arabs, imposing a role on them that, in the mode of sexual submission, merely reenacted the patriarchal gesture of imperial paternalism.

Ababri’s art is a quest for new, complex, less simplistic images. His drawings resemble arenas in which seemingly irreconcilable extremes and desires clash. The reality of a sexuality that can be lived only “invisibly,” in parks, apartments, or restrooms, encounters the activism of the gay emancipation movements from the late 1960s through punk and the AIDS crisis to the present. Ababri’s visual language may feel blunt, pornographic, positively crude, but it is richly laced with references to gay art and cultural history and gay everyday life both in the Maghreb and in Paris. That it does so without becoming pretentious, that it makes no secret of loneliness and the difficulty of communicating eroticism across boundaries of class, is its great achievement.

The above is a text by Oliver Koerner von Gustorf, who will contribute an essay for the gallery catalogue to be published in late November 2019.

Soufiane Ababri lives and works between Paris, France, and Tangier, Morocco. This is the artist’s first solo show with the gallery and in Germany and the culmination of a residency in Berlin in October and November 2019. Ababri has shown widely in Europe, with exhibitions in Paris, Antwerp, Istanbul, London and his hometown of Rabat, Morocco. His work has most recently been acquired the collections of FRAC Poitou-Charentes and MAC/VAL Musée d’art contemporain du Val-de-Marne, Vitry, both in France. 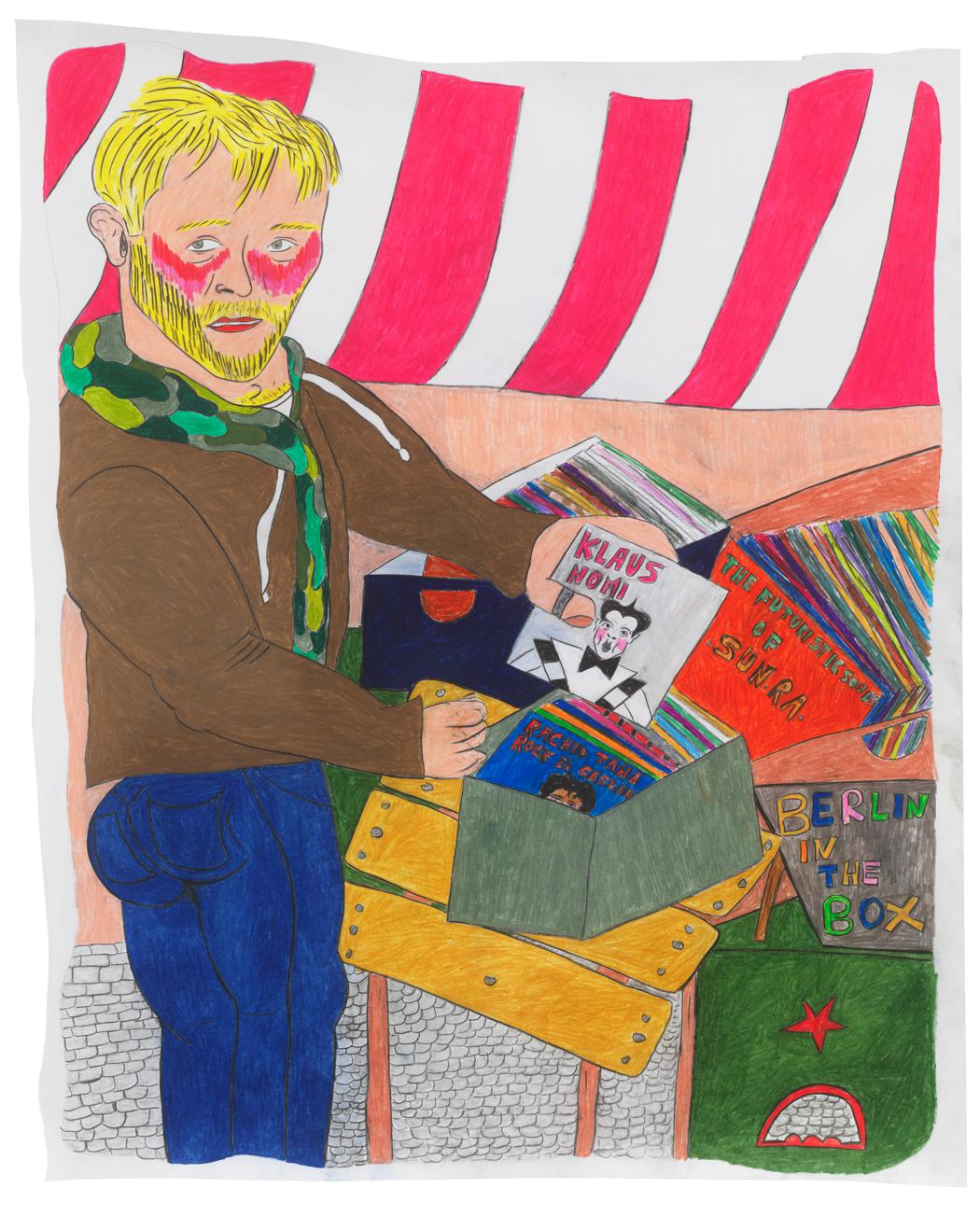