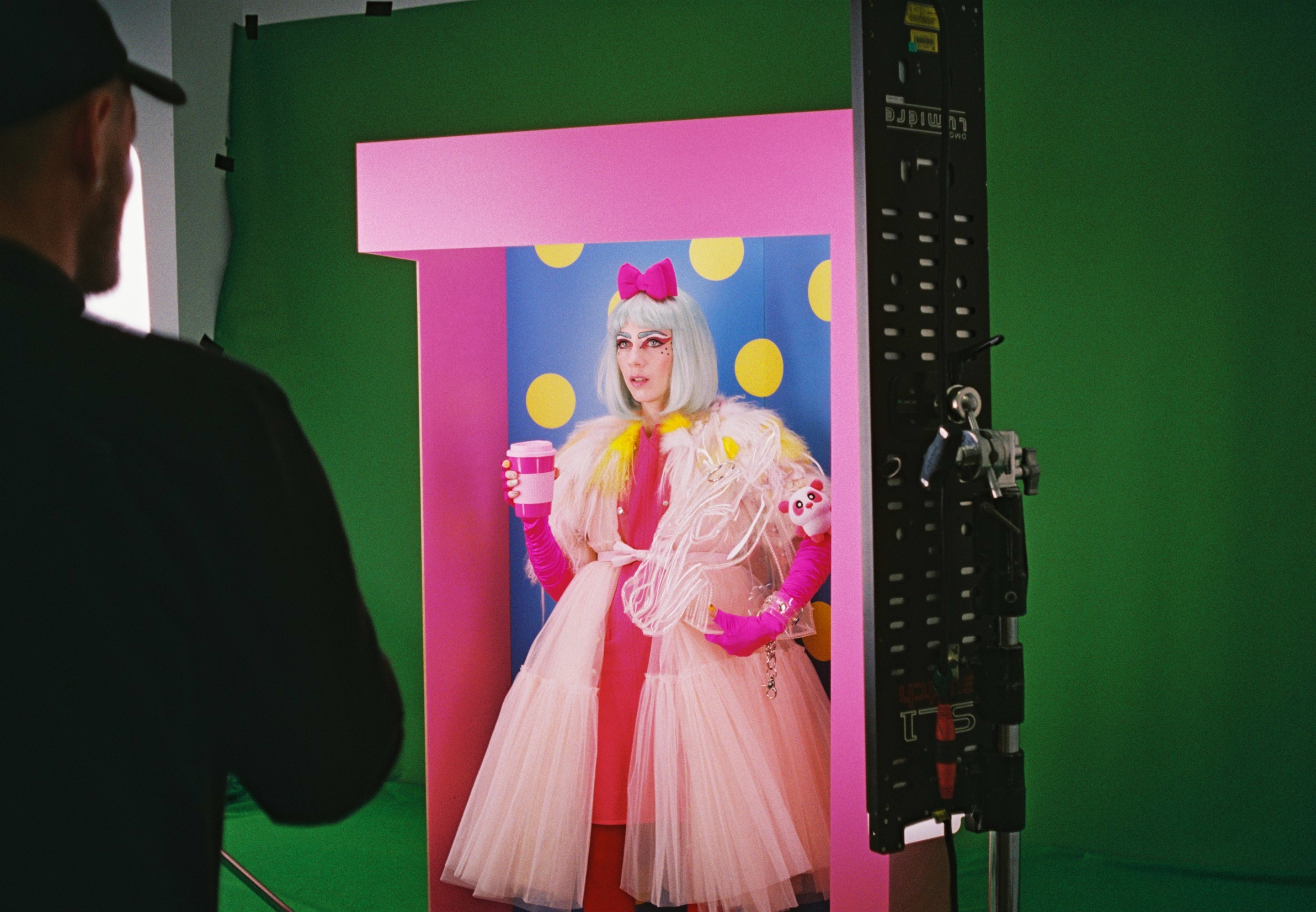 Our partners in crime, the French duo Free Free Dom Dom releases a new song “Swimming Pool” celebrating summer, and exposing the duality between the dream of a supposedly perfect life and the – dark – reality. The song comes with a crazy behind the scenes video. WE LOVE IT!

KALTBLUT: WOW. You’re back with a stunning behind the scene music video. Wait for what.. Where is the full music video?
Philippe: Ahaha! I know…Where is it? More Seriously it has been pretty hectic. The idea of the music video project poped-up 2 years ago with Production team GRANDE MAISON. It took a year before we shot the footage in Düsseldorf. Now we are waiting for the post-production artwork which is taking forever. We had this great animation artist who was willing to do it, and it would have been fantastic but then a couple of days later she said she couldn’t do it. That’s what happens when you don’t have the dollars. You can’t pay, you can’t play! Rule number 1 of our stupid society.
Little Voice: That video is a mystery.

KALTBLUT: The clip looks so much fun, how was it to do it?
Philippe: As you can see, you can’t see me, ahaha! But it was fun. I don’t mind being in the shadow anyway. The teamwork was amazing on set. That’s what makes things interesting in life, I guess, when you feel part of a team, where everyone respects each other.
Little Voice: It was an intense day… in a good way!

KALTBLUT: How many outfits are you wearing in this video?
Little Voice: Rolf Buck the stylist came up with so many outfits it was crazy…i think I have like 15 or 16 different outfits. I didn’t count…Bjorn the hair stylist created wigs for each look! Have you seen the film “SPLIT”? where the guy has multiple personalities..such a great movie. Well in a way that was me, being several people in one day!

KALTBLUT: Do you also like to wear so many crazy things in real life?
Little Voice: yes. I’m a colourful person…in and out! :D

KALTBLUT: With who did you work with on this video?
Little Voice: The project was initiated by the production house ‘Grande Maison’. One day They found me and got in touch for a project…in the end, they decided to create a music video with us.
There were a lot of people involved in the making of this video…Makeup artists, stylists, and a lot of designers like Judith Bondy, Litichevskaya…a bit surreal.

KALTBLUT: What’s the concept of the video?
Philippe: It’s a long story short. We wrote this song 4 years ago while working on a market in the south of France. We were living in an inhabited amazing BIG house with an Olympic Swimming pool. Imagine the set ! but we were only allowed to sleep in this tiny room, almost a closet. Kind of awkward. Plus a personal background history around that house made it even heavier. Even though we are ok to live whatever life brings us, we thought we had to write a song about being stuck in a what looked like a paradise from outside, which was absolutely not in the inside. The dilemma most of us live on a daily basis, I guess, and always trying to save the appearance on shit.
L.V: Homeless in a castle!!! That’s how we felt at that time. Then the video concept is about the never-ending beauty obsession of our western society. The set is a Barbie world where 2 dimensions co-exist; a pop colourful one and a darker one inspired by Jeff Koons & David La Chapelle. The idea was to expose a duality between the dream of a supposedly perfect life and the reality which is darker, tougher and unexpected.

KALTBLUT: LOVE THE TRAAACK! Is coming with a new EP? Album?
P: We wanted to release this song as one track because of its history. The struggle behind the whole process. Not getting rid of it, but kind of moving on. I mean we are still hoping to release the real music video someday but honestly we have been working on new material and it’s healthy to let go at some point. And we know things are not always going the way we want them to! Welcome to modern life!
LV: I loved this song before. But now I kind of hate it. Lol

KALTBLUT: When is your next gig?
P: We are not looking for dates at the moment. We want to focus on songwriting and finalize a strong 8 or 9 songs album/set.
LV: Yes we are more focused on creating at the moment. We have set up a music room in Paris and we are trying to find time to work on new material…but you know in such a busy girl. ;)