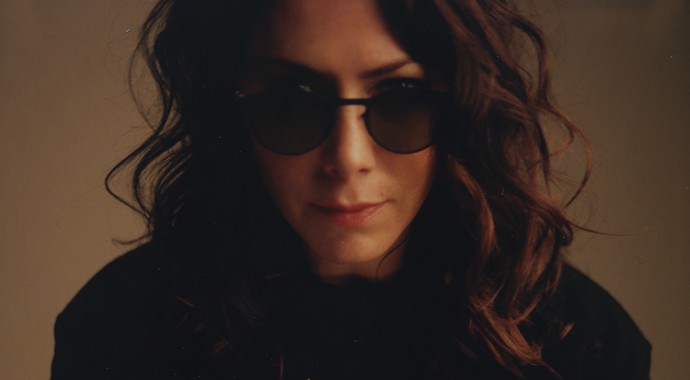 This year techno master Camea steps out of the shadows and heads towards Neverwhere as her new imprint lands, and we have an exclusive Q&A here at KALTBLUT with the artist about the label and her latest EP, Hello Earth. The Seattle born-Berliner local first became known in 2005 when she started one of the minimal techno era’s most illustrious labels, Clink Recordings. Now she comes forth with a new imprint that was inspired by her highly acclaimed Bpitch Control single of the same title, which she subsequently furthered with her monthly syndicate show, Neverwhere Radio. The show has had many guests contributing DJ mixes as well as her own, and has received a strong international following. For the first release, Hello Earth, Camea has produced three elegant yet driving tracks showing her ever broadening sound. Most artists try to define themselves in one genre, but she feels most comfortable in the space in between them, and aims to focus the concept of Neverwhere to be a place for just that. There is no doubt that Camea’s hypnotic tech house and techno sound has gained momentum as of late, and her following continues to grow as one of the underground’s most consistently respected talents. Her dedication has earned her a rigorous international tour schedule, and she is frequently playing in her home city at clubs like Watergate, Tresor, and Panorama Bar. DJing has stayed the forefront of Camea’s passion, and she has become one of the handful of women from America to make it to the International stage for her genre. Read on below to find out about her musical journey from the Neverwhere radio show to the label, falling in love with Berlin ten years ago, and her favourite things about the city.

KALTBLUT: You’ve definitely been busy recently, with a new EP marking the launch of your new label Neverwhere – could you firstly tell a little bit about your new music, and the work that’s led up to the Hello Earth EP?
Camea: Hello Earth is both a reflection and projection of myself, as it conveys a lot about my roots as a producer, and the direction that I’m heading in now. I’m trying to stay away from classifying the sound of the record, as I think music loses so much of it’s appeal once you define it into bland genre words. At this moment I’m gathering a lot of my inspiration from vinyl analog-based minimal techno, and electronica records that I am buying in Berlin, as well as modern classical techniques.

KALTBLUT: How do you feel Hello Earth is a personal statement, reflective of the unique style and sound you have developed as an artist, and your experiences as a producer and DJ that led to this point?
Camea: When I first started making music in Brooklyn in 2003, I would always find the weirdest sounds that I could make, and that’s when I would have the most fun. It was all about experimentation at the time. Today the industry is so focused on sales charts that it’s forcing producers to try to fit their music into a specific mold just to get a record signed, and it is hurting creativity. I find the more I try to fit these expectations, the less fun I have and the less I use my imagination. Doing this record I just let myself go and got back into exploring surrealistic techno.

KALTBLUT: How did your new label imprint, Neverwhere, grow out of the Neverwhere radio show, and how did your previous Neverwhere multimedia release inspire the title and ideas behind the label?
Camea: I was going through a deeply introspective and emotional period when I wrote the first Neverwhere EP in 2013 on Bpitch Control. I had a lot of personal transitions happening at the time that were causing both excitement and intense uncertainty. Living in a foreign country you can go through these periods where you feel very alone and out of your element, and I was touring a lot as well which was starting to take it’s toll on me. I felt like I was everywhere but didn’t belong anywhere, and I think that’s where the name and concept of Neverwhere came into my mind. I felt like I was on a perpetual adventure in the unknown.

After the first record was finished, I still felt very connected to it. There was more to the concept that I wanted to explore, which is why I did the multimedia project with some great remixers and Film Director, Riza-Rocco Avsar. We found this travelling Carnival that had laid temporary roots in an empty field in East Berlin, and it just felt like the right place to shoot footage for the videos. We were fascinated by this group of travelling vagabonds, frozen in time, existing within society but completely off the radar. Afterwards I decided to start the radio show, and then the imprint. The scenery at the carnival inspired the artwork for the label as well, which are surrealistic animal / human hybrid figures created by graphic artist Alland Byallo.

KALTBLUT: How do you feel that the Neverwhere label has evolved from your first hugely influential label, Clink Recordings, and what are some of the more significant ways that the process of starting Neverwhere will compare, with the advent of new technologies?
Camea: When we started Clink in 2005 it was a totally different era. We were making music with laptops in our shoebox apartments in Brooklyn, and not really aware of the industry too much far beyond that. We were just fans of the music. Minimal techno was very anti-hero at the time and I loved the unconventionality of it. To promote a record, I was personally mailing a copy of the vinyl to about ten magazines directly, and that was about the extent of my PR. When the first release debuted on the Groove Magazine Chart at #12, I didn’t even know the significance of the magazine or what that meant for how our record was doing in Europe. It was all very grassroots, and to be honest I miss those days. The industry has changed a lot since then but I’m trying to keep Neverwhere as close to this foundation as possible.

KALTBLUT: You’ve had an incredibly prolific and multi-faceted career previous to this release and launch, that’s obviously shaped you to be the artist, DJ, and producer you are today. Let’s start from the beginning – can you tell us about some of the early influences that first informed your remixes and releases, and inspired you to start producing and DJing growing up in 90s Seattle?
Camea: I was the youngest of eight cousins by four years so i grew up largely influenced by them and my older Brother. When I was in elementary school we would sit in their bedrooms listening to The Cure, Gene Loves Jezebel, Souxsie and the Banshees. Everything was always a little bit dark and punky. Then in the early 90s the grunge era began in Seattle and that had a huge effect on youth culture. Kids were growing up in a cookie-cutter society where popularity and fitting in were signs of success and acceptance, and when you didn’t live up to that standard than you simply didn’t belong. We found solace within what these bands were saying and protesting against, and it gave people the courage to accept themselves and be different. I think my more moody and dark sounds are rooted from growing up in this era. For me, writing music has always been about expressing the deeper emotions inside of myself rather than what is on the surface.

Camea: When I first came to Berlin on tour in 2006, I knew it was going to be my home. I can’t put it into words, it was just my gut telling me that this was the place I wanted to be. My first time here I played at Watergate and then an after-hours at Bar 25, and I felt this overwhelming sense of personal freedom because I wasn’t confined to any expectations. I could just be myself and explore my relationship with music. I’ve always felt that techno is a form of modern classical music. When I studied music as a child, I learned that the secret to performing music well is how you express transitions to make a song come to life. I carry that method into my DJ sets, as I tend to get bored very quickly if the music stays in the same place or doesn’t go anywhere. Classical music influenced me to tell a story when I DJ.

KALTBLUT: Your style has often been described as ‘avant-garde’ – what drives you to push the boundaries of the genre you’re working within, and how did this desire translate into releasing music on your own labels? Did it somehow give you the space to experiment and operate between genres?
Camea: The battle I have always had with electronic music is how homogenised it is. A lot of producers are aiming to make exactly what is out in the marketplace so they can make the charts and get bookings, but often times the originality is lost. I can not work like this, I have to feel like I am being myself and not trying to be someone else. Starting Clink, and now Neverwhere, is a way for me to keep the integrity of my own art and not be confined by expectations or definitions.

KALTBLUT: You’re one of a select group of female DJ’s to have this kind of impact and influence on such an international level – what advice would you give to young girls, and young people in general getting into this industry, and starting out on a similar path to you?
Camea: The first thing that an artist needs to embrace is that the world is full of rejection. You will get rejected a lot more than you will be accepted, but if you stay strong and believe in yourself than you will find your way. The best thing you can give to this world is to be exactly who you are and not what people want you to be.

KALTBLUT: You’ve played in some of the biggest underground venues, eg. Panorama Bar in Berlin for a number of years – as a Berlin based magazine we have to ask – what is it about the techno scene there that has allowed you to flourish both as a DJ, producer, and artist?
Camea: Berlin is way beyond just the techno scene for me. The city has so much depth, I love it for it’s multiple personalities. I can go to a crazy club like Berghain for 18 hours, or I can sit in solitude on the edge of a lake and get lost in my thoughts. I love the post-war architecture mixed within modernism, to walk around in Kreuzberg with the off-beat locals, or relax at the top of the Bikini Haus in Charlottenburg and drink Rosé and look over the city. I love that you can go to a record shop that is only open for three hours each week and find things you can’t get anywhere else. This city is full of secrets and confessions, and it inspires me every day.

KALTBLUT: We’ve got a host of performances to look forward to from you this summer – what direction do you hope to take the Neverwhere label, and your own body of work in in future?
Camea: At the moment I’m just trying to keep it real, stay focused on my music and not to think too far ahead in the future – as I feel the most creative when things are spontaneous. I hope that I’ll be able to balance the touring this summer with a lot of time in my studio, as that is where my heart is.

The Hello Earth EP is out now on via Neverwhere on Beatport, iTunes, and Spotify. Purchase it here.