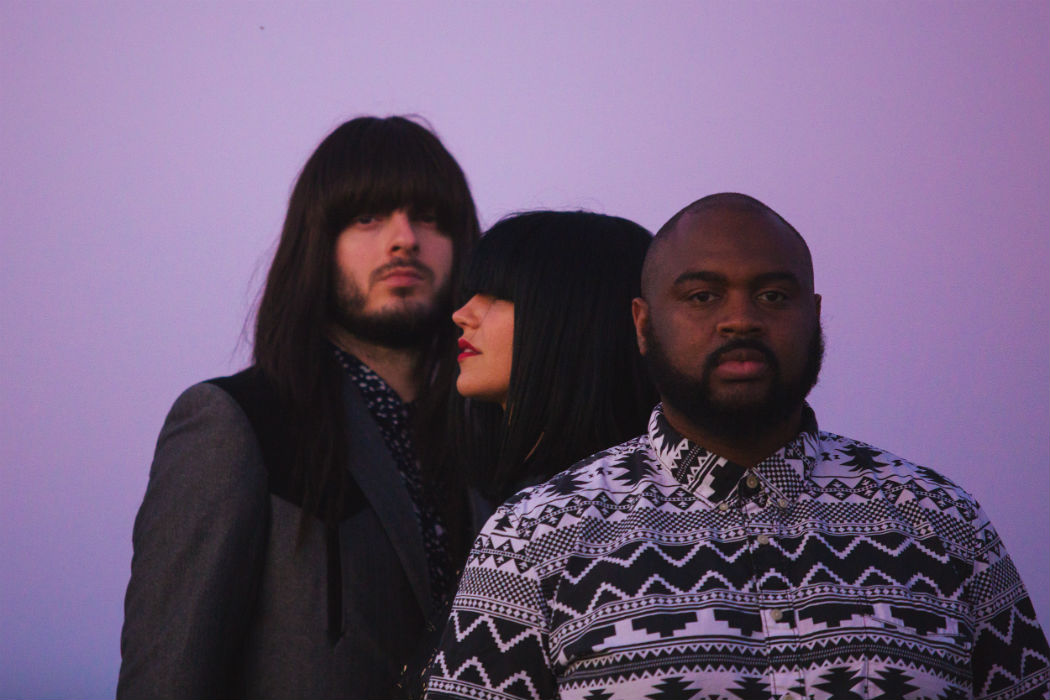 All Aboard The Magic Carpet Ride: Backstage in Berlin with Khruangbin

In a world where we have access to stream more and more music than ever before Khruangbin’s stripped-back grooves are a welcome break from all the noise. The Houston-based instrumental trio comprises of Laura Lee on bass, Mark Speer on guitar, and Donald “DJ” Johnson on drums. Their gentle swathe of soothing psychedelic tracks span across two albums, ‘The Universe Smiles Upon You’ (2015) and ‘Con Todo El Mundo’ released earlier this year, both combining a wide range of musical tastes and timbres that the band attributes largely to their hometown of Houston, Texas.

“Growing up in Houston, I was introduced to the music from all over the world,” says Mark (Guitar) “There’s the Mahatma Gandhi district, there’s Little Saigon, there’s a massive West African Community. Not to mention the fact that Houston’s basically north Mexico and in the 1800s Czech and German settlers brought their accordions and fell in love with Norteños so then you get Tejano music.” It’s easy to hear how this sonic clash of cultures permeated the fabric of the band. A patchwork of eclectic influences from around the world – their melting pot of sonic inspirations makes for an immersive fusion of cultures, flavours and feels. “It’s the most diverse city in America contrary to what people envision Texas being like,” explains Laura (Bass). “But I feel like sometimes the things that influence me aren’t necessarily sonic. I painted in school, I studied modernist surrealist art which is kind of how Mark and I started bonding initially. So I’m influenced by history, culture, and by art as much as anything else. For me, playing with Khruangbin feels more like painting.”

The band started out when Mark and DJ – who had played together at the same church for 10 years – begun hanging with Laura at a local bar down the street. “I crashed their Tuesday sessions and then just never left.” Laura reminisces. “We ate burgers every Tuesday for like three years before I ever played bass.” she smiles. “I used to draw when I was a kid,” Mark adds. “But then suddenly it was 1992. The world is your oyster, you started a band, that’s just what you did. I couldn’t afford a drum kit so I bought a bass and then I just stopped drawing and played bass all the time. That’s what got me into music was applying that same sort of obsessive, using my hands.”

From their early days swapping stories together in the local burger bar, it ended up that their first record was conceived whilst the band were based in different places and leading very different lives. “When Mark and Laura first started writing they were on two different continents. Laura was living in London and Mark and I were in Houston, and so they were tossing ideas back and forth over the internet.“ DJ (Drums) recalls. “We didn’t have much time.” explains Laura, “I think I had taken a week off from work and we had DJ for like 48 hours or something before he had to go back and play church. I remember writing ‘White Gloves’ and ‘Two Fish and an Elephant’ in my flat in London pretty quickly before we went into the studio.”

Up until now, the band has been recording their songs in a deserted barn out on a farm belonging to Mark’s family halfway between Houston and Austin. With a population of around just 300 (not counting the neighbouring sheep), this tranquil locale is just the kind of place we’d imagined the band to record their dreamy compositions. “When we started the band, the rehearsal spaces in Houston were really grim,” says Laura, “and expensive.” Mark adds, “you might be in there rehearsing next to a metal band. There’s nothing wrong with that at all. But we just didn’t want to have to compete for volume.”

“It just didn’t feel inspiring at the time.” Laura continues, “and Mark’s parents had this barn that they were happy for us to use and so that’s where everything is recorded. It’s not treated. It’s a big, drafty building with dirt floors. There’s animals living in there, bugs, the whole thing. But it’s really great.” I catch Mark nodding in agreement. “You can just open up all the doors and what I really like about it out there in the country, there’s a lot of noise but it’s different from noise in the city. There’s the wind or birds, or bees, or the tree outside of the building you know? That kind of stuff. That makes it so I don’t feel like I need to fill up all this space. Let the birds have this verse. When you recording like a studio, it’s so quiet to start off with that you feel a need to fill up space. I remember times in the past when I used to do production and try and layer on as many things on as possible. Khruangbin is the total antithesis of that.”

Ambling its way gently onto my own summer soundtrack this year I’d mostly experienced their tunes in my downtime – chilling at home, zoning out on the commute home or perhaps most memorably on our wedding morning when Nicola desperately played me any music she could think of to calm me down (!) so I wasn’t sure how their music was going to translate to a live setting. “We try to keep the energy level really dynamic when we play live, bringing it up, then taking it down – taking everyone on a journey.“ Mark assured me. Turns out that he couldn’t have been more accurate.

At their Berlin show the whole experience from start to finish was like floating away over the crowd on a cloud of heady smoke into some kind of parallel universe. It only occurred to me later on as I was walking home just how masterfully they’d moved with the crowd. At certain points none of us were really sure if we were watching a gig, participating in a glorious shamanic ritual or having some kind of mutual hour-long brain orgasm (perhaps all of the above). “It changes everything [playing live]. Laura explains, “it gets better and sometimes harder but it’s also the type of thing that you take a few days off and you miss it. There’s nothing like the energy of a crowd. It’s a beautiful thing to travel and see crowds from all over the world because they’re all different. Every city, every country has its own thing and it’s great to experience our own music by watching them.”

Having played shows from San Francisco to Seoul when you look at how much the band has been on the road lately it makes sense how at home they seemed in front of a live audience. “When you play a song every night for a month it takes on its own thing, you know?” says Mark. “The song just keeps telling you what it wants and you’re like, okay song…this isn’t how we wrote you, but sure! [laughs]. If you just do it every day, you just get better at it.” The clear absence of a singer or lead-vocalist only adds to the band’s mystique on stage. “We didn’t want to have vocals in the band, we just wanted to play music.” Mark explains, “It just leaves all this space in between. There’s no chords. The chords can just be implied by the melody that I play or what I play against Laura and I think that kind of gives it a sense of space because there’s nothing filling in.” Although Laura admits to them having finally giving in and adding some vocals more as texture, they were all keen to make sure that the vocals or lyrics didn’t become the main event. That doesn’t make their tunes any less hum-worthy however, with fans to both the left and right of me singing along to the melodies all the same.

With shows back to back almost solidly for the past year and more planned in over the next half year, we were curious to find out how their perpetual touring schedule had altered their songwriting and recording process. Turns out the ebb and flow of the band’s own journey – and those experiences on the road – have simply worked their way into future creations. “I think now some of the songs are written at soundcheck check, DJ has a collection now of stuff that’s happened and we’ll have to use a lot of those things for the next record”, says Laura, “I love making sandwiches for the band, and I like going into the fridge and it looking like there’s nothing left but finding just enough to make an epic sandwich and they’re just like, what!? And that’s kinda how I approach it now. Especially when we’re piecing the album together, you have all these disjointed pieces and it’s about finding a way to put the puzzle together so that the album feels like one finished sandwich.”

Between the tasty riffs of Mark’s guitar, Laura’s moreish basslines and DJ’s secret sauce – that ever-steady backbeat – we can’t wait to sink our teeth into their next album already. In the meantime you can catch a special Christmas single from the band at the close of a marathon year of touring they’re releasing an update on Vince Guaraldi’s timeless “Christmas Time Is Here”. Get it queued up for your festive playlist by clicking here: https://khruangbin.ffm.to/christmas.

Why not climb aboard the next flight with Khruangbin for yourself and see where it might take you? Having just wrapped up a massive tour supporting Leon Bridges, Khruangbin will hit the road next month for a slew of headline dates across North America. The tour kicks off in Phoenix on Tue. Nov. 6th and includes shows at The Fox Theatre in Oakland, The Wiltern in Los Angeles, The Vic in Chicago, the 9:30 Club in DC, two nights at Brooklyn Steel in NYC, and more. For a full list of dates and to book your tickets click here.