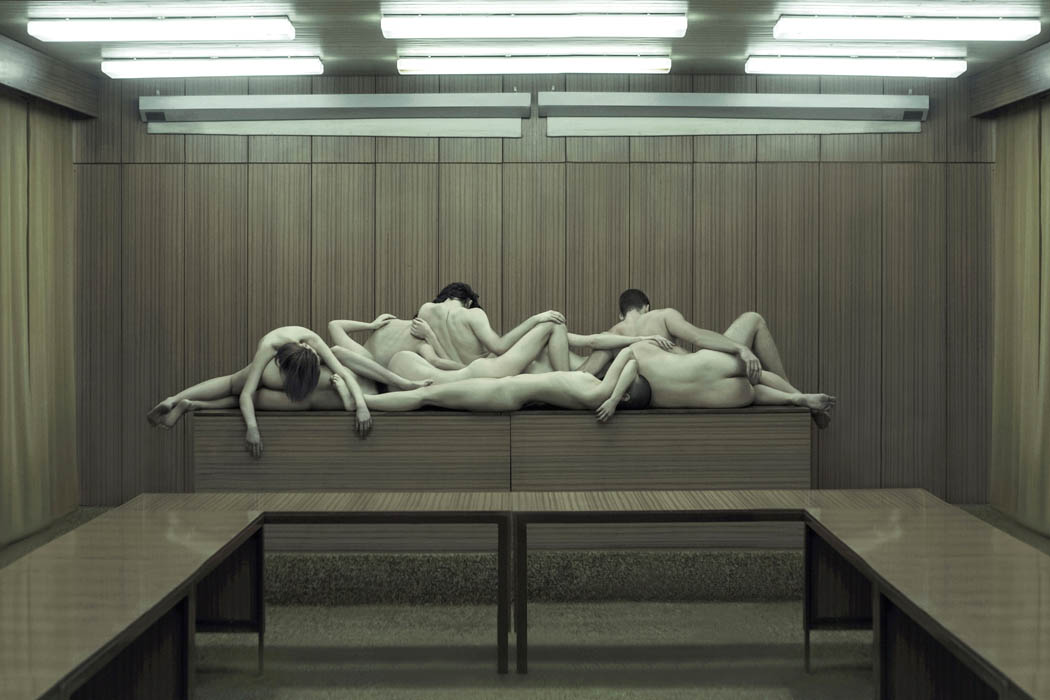 Artist Of The Week: Evelyn Bencicova

Hers, is a different aesthetic vision indeed, alien, which doesn’t consider itself to be above the common vision because, simply, it doesn’t belong to our time.

Is it a bit of future? Evelyn is an alien, an alien looking at a world which doesn’t belong to us, but sometimes, through her shots, through the wonderful, strange, creatures she captures… she gives us a perfect vision. So we reach a new world, made of cold atmospheres, clinics, populated by, surreal, pale bodies, playing with the Sacred and Profane. We end up charmed before her imperfect creatures, finding strongnes just in their imperfections, their personal and disarming beauty.

So we see a naked body with no gender, no age, no more status…it’s unarmed, shapeable, extraterrestrial. It becomes an architectural composition when it shapes into others entities becoming one creature. An impermeable, clinic, ambient  remains on the forefront of our minds where Evelyn says: “Something happened, but nobody know what exactly”.

What I really like of Evelyn pics is this: The eternal balance between real and unreal, classic and avant-garde, secret of unconscious and raw representation of reality.

KALTBLUT: Evelyn, I have defined you as an alien, who delights us with her representation of a surreal reality. Do you feel so? How you can define your approach to photography?

Evelyn Bencicova: My pictures are often not imbedded in everyday reality but often they reflect it in a way. It may be an illusion but it is based on truth.

KALTBLUT: “A beautiful picture is not enough for me anymore” you said in a past interview. In fact the first thing I notice in your work is a strong underlying concept, that is capable of generating emotions completely distorting the classical conception of beauty imposed by society. The question is: What do you want to communicate?What is, in your opinion, the beauty? It exists or not?

Evelyn Bencicova: If eyes were made for seeing than beauty is its own excuse of being. Beauty is divine. It cannot be measured or explained. Beauty is eternal in its existence and transient in its form. It has been redefined so many times and still doesn’t lose either meaning or importance.

My idea of beauty is very subjective. In the interview I was speaking about my belief that strong visual aesthetics and powerful concept can work together rather than against each other. I’m trying to create something valuable for everybody and than understandable for anybody who is willing and able to go deeper.

KALTBLUT: Our origins, our culture, inevitably end up influencing all our activities. How, your origins, have influenced yours?

Evelyn Bencicova: Cultural exchange is important part of my work and aesthetic. We are traveling in order to get to know other influences but in fact we are also becoming much more aware of our own origin and culture while being abroad. You need to get this kind of distance and outside perspective in order to observe everyday reality with new active interest. In this point I moved from passive acceptance to analyzing and searching for the reasons behind. I grew up in Slovakia where people often like to forget their past and rather accept ideals, which are not their own. This effort to cope with leading trends and imitate foreign aesthetics in the matter of art, fashion or lifestyle is rarely natural or successful.

I decided to break this and to be inspired by our real history, which seemed to be so unattractive for most of young people from Slovakia. One beautiful quote is telling us:  If we do not honor our past we lose the future. If we destroy our roots we cannot grow.

KALTBLUT: “Creation can be painful. You need to feel it inside of you. The feeling is the inspiration.” What is inspiring you?

Evelyn Bencicova: Everything inspires me as long as I have my eyes and mind opened. It is not enough to look at the things in order to truly see them. World can seem to be an empty place for empty person but it is not. I believe that anything can be interesting if you sacrifice enough attention needed to get to know and understand the topic.

If you prefer more specific answer I admire movies of Andrzej Zulawski, music of Philip Glass, paintings by Egon Schiele or Theodore Gericault.

KALTBLUT: How would you describe your approach to photography in three words?

KALTBLUT: You generate images that tell people something, very far from the classic glossy photos from the world of fashion. Yet, I’ve noticed that you’ve got to work for that sector. What is your relationship with fashion? Is it difficult to maintain your style even if you have to accept “their rules”?

Evelyn Bencicova: It depends on a definition of the word. “Fashion” is about following and I don’t want to follow and present something I don’t believe in. I’m realizing more and more that it is a responsibility to choose, what kind of content I will deliver with my work and how it can affect the viewer. On one side I like to create an illusion with all its beauty concentrated in one particular moment. On the other side the idea of putting the clothes or another product on the first place is not so suitable and challenging for me but fashion is still strongly influencing my aesthetics.

In the future I would love to deal with more important and interesting than picturing just beauty, if nothing more is behind it. That would be too easy.

KALTBLUT: One of the peculiarities of your images that I love the most is the strong concept behind, capable of generating emotions, shock the viewer, so the woman (women) on crutches almost becomes a statue and the fat woman a vanguard post Botero. What is, for you, the imperfection?

Evelyn Bencicova: I prefer unusual, looks and personalities. I like to capture something what you cannot be forgotten so easily. Imperfection is life. It creates diversity and variety of the world.

It has to be admitted that also I have a certain idea of beauty, which can be called taste even if it doesn’t fit traditional norms in many aspects. I consider all my models beautiful and didn’t choose them because of their imperfections but because of their unique look and/or character.

KALTBLUT: The atmosphere you create, even if it’s far from reality, it’s also not so close to the classic dreamy photography: it is raw, cold, almost clinical. These features are present in all your works, as if they were your hallmark. Why did you choose this type of representation?

Evelyn Bencicova: It depends on a project. In ECCE HOMO I was searching for cold public spaces where people don’t behave like individuals anymore. For ASYMPTOTE I’m using places from socialistic era with real history. It is truth that a location is somehow representing certain state of mind, mood or atmosphere of the photo. I’m spending a lot of time with scouting for the right place where to imbed the idea and build a scene. If it is the right place I usually know it immediately. Besides few technical parameters the most important is to feel the energy of the space. I mean this feeling, that something happened there but you are never sure what was it. It usually activates my imagination more than anything else.

KALTBLUT: I firmly believe that each picture is generated from a precise idea born in the mind of the artist, then, in a sense, ends up telling the identity of those behind it. How your photos tells something about you?

Evelyn Bencicova: The idea in my head is never born finished. Instead of precise idea it is just AN IDEA that develops in the process. I need to go through certain progress myself and sometimes it may take a while until I can fully understand connection between incurred work and my current state of mind or existence.

Every work is an auto portrait in a way. It embodies my thoughts and thus creates something like my inner picture. Final result always differs from original vision even if I create the whole scene and plan a lot of details before. On set I like to have a freedom, which provides space for creativity and accident. I know what I want, but the way how to reach it can change and transform during the shooting.

KALTBLUT: “Ecce Homo” ! The nude. Protagonists, stripping himself of all artifice, lose their individual identity to mold itself to the other, creating human structures malleable, indefinite, intersected, while all around is rather empty. What is the goal, the predominant emotion you wanted to trigger in the observer?

Evelyn Bencicova: This project is about humanity, simplified to its most basic gestures and forms. This is my goal or explanation, which doesn’t need to be the right one for everybody. I actually like to play with the idea that every time you are looking on the pictures you are somehow looking at yourself. So I would answer: I want people to look at themselves through my photos.

KALTBLUT: “Icon” – Your subjects are revealed, almost always individually, and become the protagonists and main actors of the picture. In this project we see how strong your bond with them, I guess it’s very difficult to choose them and, even more difficult, transmit them the idea in your head. Tell me something about this.

Evelyn Bencicova: In project ICON I wanted to portray female saints and strong characters from the bible. By doing so I’m trying to compare religious iconography with contemporary and see what changed in our imagery through the history.

In projects like this, when the focus is on a person there comes the possibility to create much more intimate atmosphere then during huge, precisely staged scenes. Good communication and connection between us is crucial. I need models to be really mentally present. The feeling must be there, in the room if I want to see it on the photo. I prefer to work with people, whom I know so I can be sure that they understand the project and their role in it. My work is always collaboration!

KALTBLUT:  The latest project, “Asympotet” differs a bit from others while is remaining close to your photographic vision. I’m curious…

Evelyn Bencicova: It is collaboration with my close friend Adam Csoka Keller (as many of my works). This project is connecting our national history with photography, video and other art forms through which we are communicating this theme with wider audience. It includes a lot of research and journalist work so for both of us it is a challenge to process more serious, academic content and combine it with our visual aesthetics.

KALTBLUT: How do you see yourself in the future? What is the picture you have in mind if you close your eyes?

Evelyn Bencicova: I know that I want to grow. I want to go higher and deeper. I hope to never stop believing in what I do and searching for what cannot be really found.