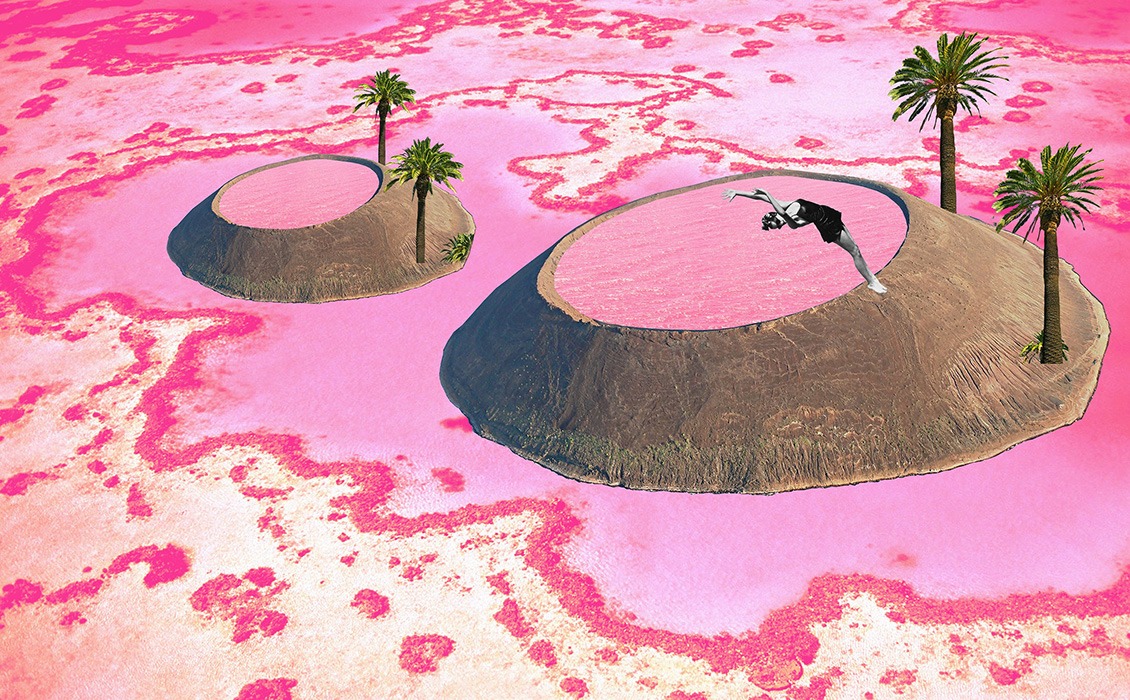 Artist of the week: Fei Alexeli

Fei Alexeli finds it difficult to talk about herself. Let’s just say though, for the sake of this piece, that she is a visual artist focusing on mixed media. Her work expands on many fields such as digital photography, montage/edit whilst only recently she began to transport all of the above as 3d installations using lots of neon. She is moved by the concepts of transformation, evolution, expansion. Text by Konstantinos Plakonas.

That’s the reason she intervenes on photography. She’s trying to redefine its core-and by consequence its substance, proposing an alter essence.
Alexei’s collages present utopias under a surrealistic, pop cloak. Add to that some simple geometry and brutalism and you are right on spot. Her style and aesthetics were formed on a first basic level by Architectural Studies at Oxford Brookes University and a half-completed Master on Design at Willem de Kooning Academy of Rotterdam but are of course constantly changing depending information, time and space. A big part of her work centres around space itself actually.

The moon, the stars, the universe, are important elements for Fei but the most important thing is escapism. Whenever she looks at the sky and tries to realise the size and majesty of what she’s seeing, everything is put together as they should be, in their true stature.

“Earth and human History are just a microcosm compared to the sublime universe. Ideally, I would like everyone to get this feeling when they encounter my work, that in the end, not everything has the importance we give-and that’s really okay”.

“I guess native elements, bits and pieces from my home country or the greek countryside as a landscape don’t really work for me cause they aren’t the proper vehicle to escape reality. On the contrary, tropical elements such as palm trees, retro Americana combined with the universe, are. They compose something more let’s just say-unreal but at the same time, nostalgic too.”

Born, raised and now living in struggling Greece, Alexeli had and has shown all over the place. New York, Hamburg, London, Stockholm, LA, Swindon are indicatively some of the cities her art has travelled (or going to) but not Athens or even Thessaloniki-where she is staying.

“I can’t really say anything about buyer personas in Greece cause I haven’t tried to do a show in Greece yet. Being an artist is hard itself, being an artist in 2018 Greece is just surreal! Nevertheless, I think there are ways of living through art. Either by having a presence and being active abroad through online art galleries, having Greece as a home, or by collaborating with more commercial sides of art that could feature your work (at least mine) with respect without making it seem cheap or extemporaneous”.

Fei Alexeli seeks magic, surrealism and whatever isn’t familiar both in her life and in her art. She doesn’t have any pretentious vision or a masterplan, she tries to avoid imprinting reality on her pieces, trust her instincts and stay humble in front of the cosmos. Palm trees, asteroids, sunbathing on space highways and tigers on the moon come afterwards. Welcome to (her) no bad days.

2-5 May – The Other Art Fair
Brooklyn Expo Center, New York