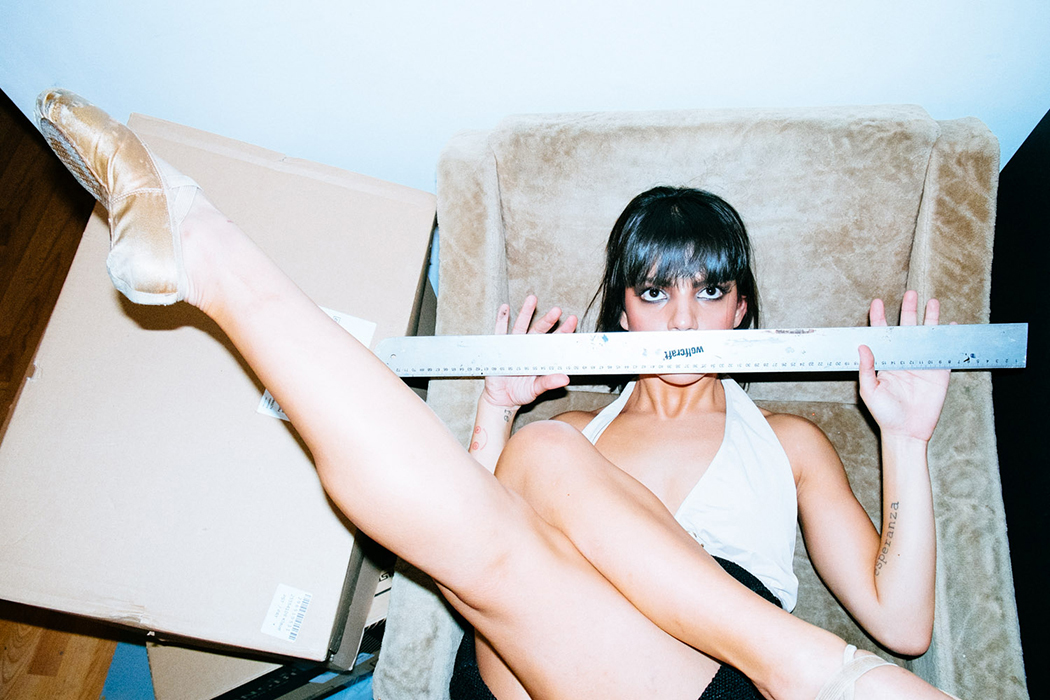 A KALTBLUT exclusive interview with Kiani Del Valle. A contemporary dancer, dance teacher and creative director from Puerto Rico now living in Berlin. We met at her dance studio. The picture’s are made by Nico Stingue, styled by Alexandra Moonage, and make-up by SERVULLO using Mac Cosmetics.

KALTBLUT: Hi Kiani thanks for taking time to talk to us, How are you?
Kiani: I am doing fine!

KALTBLUT: You are more than just a dancer, you’re an artist, what is the first time you came in touch with art?

Kiani: I was around five years old when I started painting and doing sculpture. When I was ten years old I started taking theater classes. But I was a tomboy I used to like rollerblading and jumping ramps .  My thought was “no ballet it’s not for me” and my teacher said you have to take the class.  So then I started to take dance classes at this school that  had a Montessori approach. You would do a lot more than only dancing, you would take theater lessons,     make paper mache masks, stage make up, pantomime, etc. There was so much more than just ballet and that was a very healthy environment for me. After a few years the teacher said we had to leave because we were in that same dance level for such a long time. It was  then when I realised that normal dance academy’s are really hard-core, and that  my idea of dancing was different. A lot of my friends gave up because of that. And I had some rough times but for some reasons I am still doing it.

KALTBLUT: How would you describe your way of dancing?

Kiani: What I do is contemporary work. I think it’s a little bit of everything, like dripping paint, yummy food and notes on a mountain of shit. My work is just a pile of things I like and love, with sincere feelings and a lot of ideas. It can be a little esquizofrenic at times, but If you ask me to describe it in a short way its contemporary dance.

KALTBLUT: You bring in a whole new vibe why do you think people like it so much?

Kiani: Do you think so? I don’t know!

KALTBLUT: Yes! Personally I love it, but you also get a lot of requests and jobs to dance!

Kiani: Thank you! I think in general I am very hungry to do work. It makes me feel like myself….. My personality is part of my dancing, witch I don’t know if its a good thing, but maybe that’s why?

KALTBLUT:  I saw you are also writing. What do you write about?

Kiani: Wow, how do you know that? I am a little bit surprised by this question. Well I used to write a lot of poems when I was a little girl, and  when I started dancing I also started to write essays about how I felt or a mood. And then I would go to the dance studio and translate every word into movement. I did that many times but for some reason I lost the connection between writing and dancing and I feel that maybe I  should get back into it because it was a really important part of my creative process. Now I still write, but mostly songs for my friends or just writing in my diary.

KALTBLUT: What is the most important event in your life in relation to your dancing?

Kiani: This might sound very dark but for me it was one of the most important moments. I was in Montreal and the day before the show I got injured. I already injured my knee 2 or 3 times before. And I remember the doctor told me if it happens again you have to put your knee back in place, you have to do it yourself. I was rehearsing with my friend Filipe when my kneecap dislocated and it felt the craziest excruciating pain.

I don’t know where I found the power to start hitting my knee until the kneecap went back in place and then I performed the next day.  The feeling I had the next was that I am capable of doing anything and even though it was a huge risk and, if I had a daughter I don’t know if  I would let her do that, I still did it. It has stuck with me that  the mind is very powerful and the mind controls the body. I am still amazed about how the body and the brain relate to each other, it’s really scary but amazing. And I realised I was capable of doing that because I really love dancing.

KALTBLUT: What is the most beautiful moment in your life?

Kiani: When I am at the beach in Puerto Rico, those will be the most beautiful moments of my life. When I am in my natural habitat.  Because I’ve been working hard to accomplish my dreams, feels that I have to do this or I need to move there. With time my dreams have shifted, transformed and morphed. But It has been a hard. There have been a lot of struggles  on  the road and I couldn’t look back at home because it was too hard and I needed to keep on going. Now slowly is changing.  It’s  becoming a place where I need to go to recharge energy so I can keep on going again.  I try to go back once a year.

KALTBLUT: What is your favourite kind of music to dance to?

Kiani: That’s a difficult question, maybe trip hop, moody jazz, trap, hip hop definitely, 90s grunge definitely, Nova TROVA, salsa.  But also classical music because of ballet. I guess  I don’t have a genre I can’t listen to. If my body feels it, and it makes me move I will like it. Hold on, maybe not country music… it does not make me dance.

KALTBLUT: Why did you chose to come to the city Berlin?

Kiani: I had some friends here and I also had a job here making a video and very quickly after that I had more music videos to make. A lot of new opportunities for me where presented and now I am still here. I don’t know for how long. I guess work and hunger is what takes me places.

KALTBLUT: Do you have any dreams for the future?

Kiani: I have several dreams, I would love to have my dance film in a lot of festivals. I would love to keep making dance videos and have my own dance company. I would love my dance company to be a hybrid of  Contemporary dance, performance art, and the use of voice and music collaborations that depart from the movement not from the music and the notes. At the moment I am multitasking doing a bit of everything separately to an extent. But the ultimate dream will be to have all of that together. And maybe have a house by the beach, with my own dance studio, 2 otters as pets and a pineapple farm ?

‘Shadows Cross’ is a collaboration piece with dancer-choreographer Kiani del Valle set to Kyson’s beautiful song of the same title.