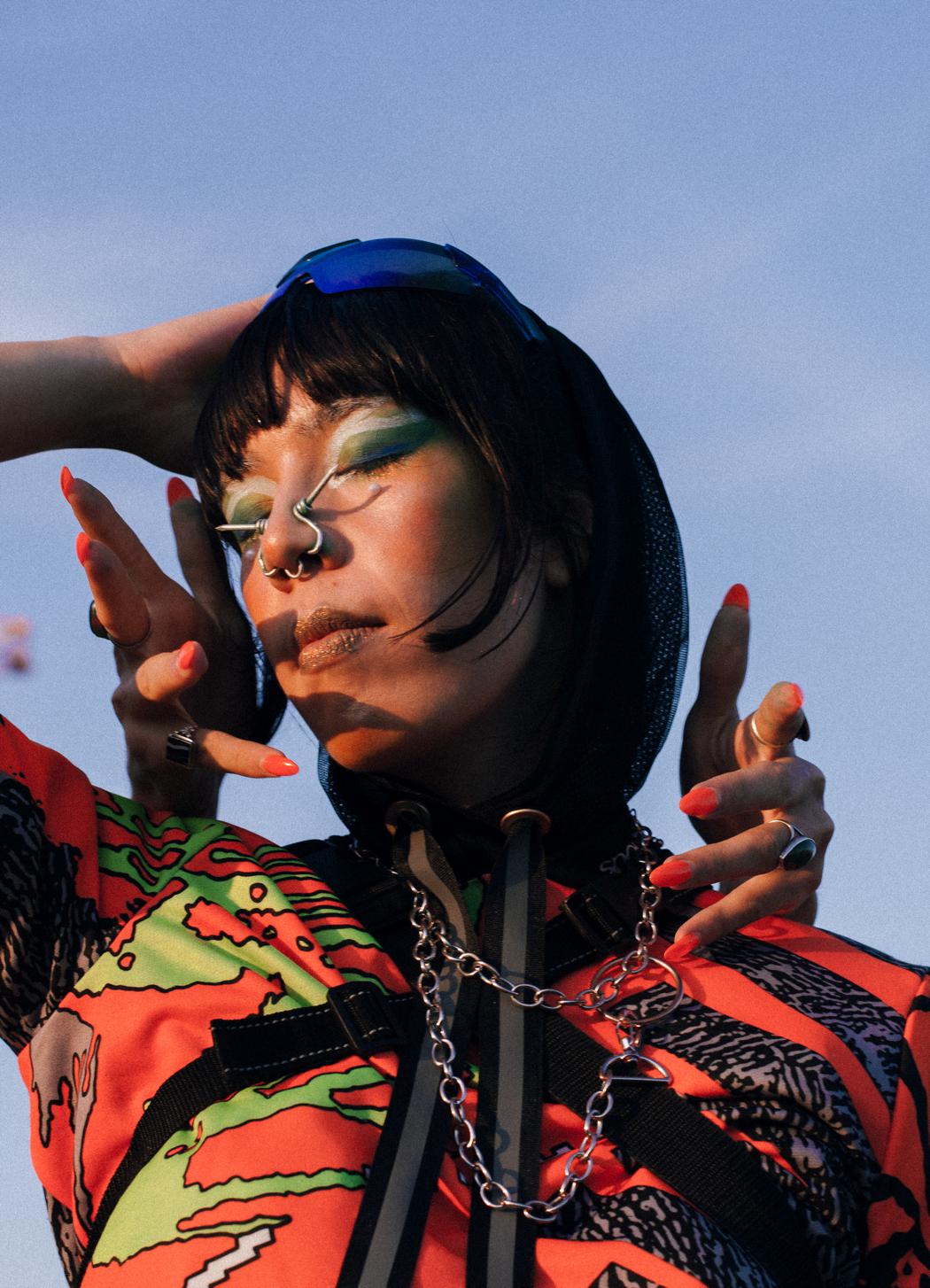 Embracing a surreal, futuristic digital aesthetic, creative technologist and multidisciplinary designer Tabitha Swanson has developed an enticing world of eerie hell-scapes, Matrix inspired backdrops and protests against bodily censorship through her Instagram filters. The Berlin based Canadian artist is part of DigiGal, a collective for femme, non-binary and trans people working in 3D and the multidisciplinary, multimedia industry. We meet Tabitha Swanson to chat about how Berlin has shaped her work, her collaboration with the Black Market and her love-hate relationship with Instagram’s platform.

The Beyond Club Culture photography series is an ongoing project by sustainable fashion brand, Not Too Sweet. By exploring the diverse plethora of talent that lurks extrinsic to Berlin’s infamous club presence, we meet Berliners in daytime mode and chat about how they’ ve honed in on their art form and the role Berlin has played during their metamorphosis.

KALTBLUT: Hey Tabitha. Can you tell us a bit about your art?
Tabitha: Through my artwork I really want to explore kind of social dynamics, political references, and just what it’s like to be a person, especially when you’re mixing it with technology. I think that the cross-intersection between technology and art is more prevalent than it’s ever been before and I think that’s quite interesting as well because now technology has become accessible for so many more people which means that creatives have access to be able to use technology like machine learning, like 3D rendering, different things like game design, when that might not have been something that they either had the monetary means or the technical knowledge that they had before.

KALTBLUT: What types of technologies have you been using?
Tabitha: I’ve been quite into AR – I started to use that with filters and stuff. I’m also quite keen on 3D design and also exploring like machine learning a little bit as well as well as virtual reality. I come from a mixed background of fashion, marketing and design and previously I was doing a bit more like classic design and UX, UI, but I’m just so enchanted by this ability to create a world that people can explore and have complete control over making this world and I think that virtual reality has often been called the ultimate empathy machine. For me, evoking empathy is what art is all about.

KALTBLUT: How do you try to evoke this empathy through your work?
Tabitha: I think part of evoking empathy is doing things that people can somehow relate to, that they have a personal connection to. And then taking that and then turning it into a question or a proposition that they somehow explore on their own. And I think that good art makes people feel and often it makes them think, maybe it makes them self-reflective and that’s something that I really enjoy.

KALTBLUT: What brought you to Berlin?
Tabitha: As I said, I’m originally from Canada and something that brought me to Berlin was the creative scene here. It was also the challenge of learning a new language, of learning and integrating into a new culture. For me, I’m super curious and I love exploring and I love challenging myself and so I think this was almost a natural next step for me.

KALTBLUT: Now that you’ve faced these challenges for a few years, is there something that makes you really passionate about Berlin that makes you stay?
Tabitha: The thing that keeps me here, first and foremost, is the community. Never before in my life have I been surrounded by so many people who are all so curious, who are so giving and so encouraging and so supporting, so engaged in what they’re doing and keen on collaboration rather than competition. When you work with other people I think that you have the ability to make something so much greater than yourself and I think we need that support. It’s not always easy being a creative and it’s not always easy following your passion. And sometimes you don’t have that support from the government, sometimes it’s hard to make money doing your passion, and so community is one of the most crucial and supportive things that you can have.

KALTBLUT: As a result of Berlin’s unique charms, have you noticed a shift in your art since moving here?
Tabitha: Absolutely, it’s like night and day. I’ve definitely seen a shift in my art. I think back in Canada I was really struggling because it was so expensive in Vancouver. I feel more in tune with myself and my art and also my values when making this art and what I want to achieve with it. I feel more in tune with that than I ever have before.

KALTBLUT: Let’s have a chat about Instagram and how you’ve been working with filters. Can you tell me a bit about how the platform works for developers, for people who don’t know?
Tabitha: To make filters on Instagram and Facebook, they’ve developed a software especially for that, it’s called Spark AR. It’s a free software so anyone can use it, so now that the platform is open, anyone is able to submit those filters. You can make makeup filters, you can make filters with interaction – so when you open your mouth different things happen. You can make filters on the ground, you can make things interact with your hands. And it’s really just another outlet for creativity, but it takes it a level further because you get to interact with it and I think that’s something really special.

KALTBLUT: What have you used the platform to create so far?
Tabitha: I’ve used the platform to create just a number of different of different filters, some of them have been purely aesthetic, but some of them have also been with a cause behind them. There was one filter that I made that I cheekily called ‘Cancelled’. It looks like a notification on your phone, saying “your account has been deleted because Instagram cannot handle nipples on the femme/non-binary body”. And then underneath is a button that says, “Free the nipple”. I think this is so relevant now because artists have out of necessity and just out of want moved to Instagram to make art, but this platform has become so vital for artists. They’re censoring things and it’s changing the shape of art. But this censorship is only aimed at a certain group of people – all sorts of things are being taken down and it’s targeted at femme, trans and non-binary people and I think that’s wrong. I think it has to do with that hyper-sexualisation and control of these bodies and I think that’s just part of the patriarchal structure that is so prevalent and exists in such an insidious way within laws and within systems and within people’s mindsets. And it’s reflected on platforms like this.

KALTBLUT: It’s interesting that you’re using the platform to protest against the platform. Why is that necessary do you think?
Tabitha: I actually didn’t know if Instagram would approve it because it was a form of protest towards the actual platform, which was quite meta in its own way. But I’m happy that they did, and I think that it’s kind of cheeky, but I think protesting these things within these spaces is important.

KALTBLUT: Can you tell me about your other filters, like your collaboration with the Black Market?
Tabitha: Yeah so this was a really exciting collaboration. Maybe just to touch on filters again – I think that for all of the things to be said about them, they are also just super fun, they’re engaging, they’re a way to share things with people and I think that that’s quite interesting. I think that they’re an amazing tool. Not only for designers and creators, but also for brands, and for you know, anyone on Instagram really. Collaborating with the Black Market was extremely exciting. We had a couple of conversations about what to do and then kind of fell on this kind of techno-future matrix vibe. And that was quite fun.

KALTBLUT: What is the filter?
Tabitha: The filter is called ‘The One’ and we definitely had some inspo from The Matrix. We have this falling glitch tech lettering in the background, and then the person whose using it – you can use it with multiple people – but the users are in a screen that looks like they’re inside of the computer. It’s a filter that you can use with your friends, possibly with your dog. It works sometimes on dogs. And yeah, one that you can have a lot of fun with – I think that it takes you to another place. It is really enveloping.

This interview has been edited for clarity and brevity.
Interviewed by Laura Box @box______