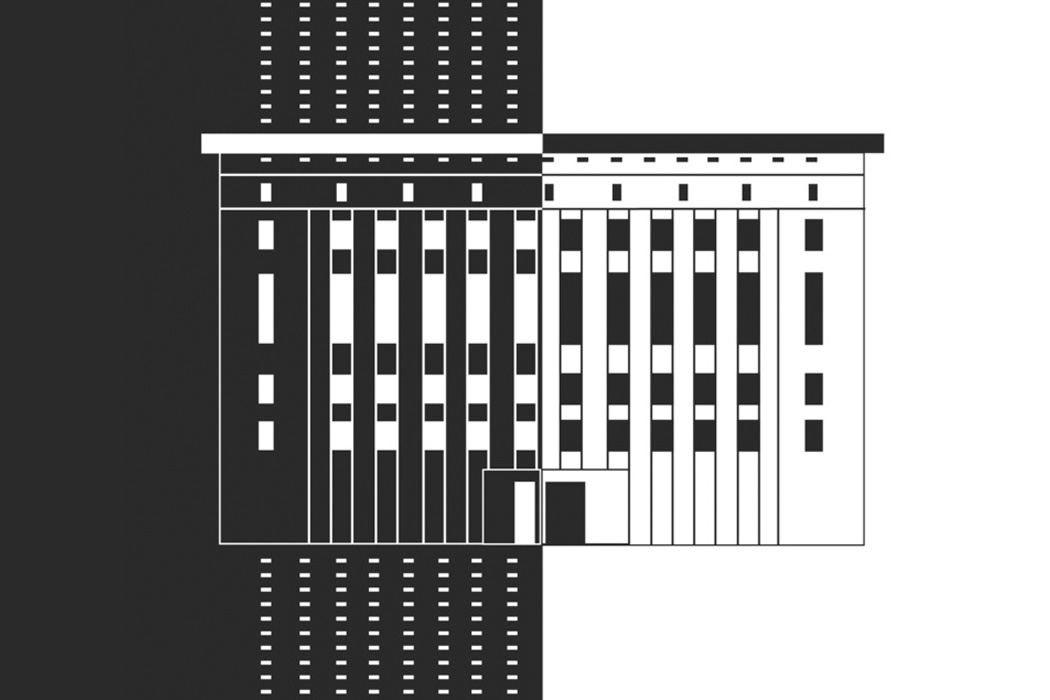 Non-content of being the rather undisputable king of clubs, our favorite repurposed power-plant has now also spawned a fiction, so when we first heard about the book “Deux Mondes – Panic In Berghain”, we knew that a read was inevitable. Turns out that the book was an interesting effort, so we decided to sit down with author Brieuc Le Meur for a chat about techno and literature.

KALTBLUT: Hi Brieuc, so you’ve just published “Deux Mondes – Panic In Berghain”, which despite the title actually deals rather little with Berghain itself…

Brieuc: Yes, it’s about the Club and the city. Both are characters in the novel. They live.

KALTBLUT: You don’t even mention the club by name, it’s always referred to as “the club”, was this by choice or by necessity?

Brieuc: I wrote the book with that title in mind, from the beginning. It popped up like that. That helped me to slow down the fascination, to take control of what was happening inside of me. I know the techno scene since the early 90s and my goal was to introduce something bigger than music and bigger than the club itself. Because it’s a fiction, I needed to exaggerate the tension, the magnetism… It’s a tribute to that place, to techno and to our times. But that first part is a tribute to Berlin. I painted it as a deformed mirror, with different reading possibilities. When I was writing, I couldn’t use the name, because that book also tells the story of all the clubs, of all the other places.

KALTBLUT: The story focuses on the daily life of the main character, who alternates between a laboring day job and nights spent in clubs, both as a dancer and an artist. It’s a story which many aspiring artists in Berlin can relate to… To what extent is it autobiographical?

Brieuc:  Does a shit job without responsibilities help an artist to focus on his art? Yes. And it is purely autobiographical here but I did exaggerate the absurdity of the tasks and some of the relationship aspects.

KALTBLUT:  Throughout the book, the style is dark, often cynical; the narrator seems stuck in this working/clubbing dead-end, is hyper-critical about everything around him, the city, the people, the music scene… but he also seems content of this situation as this opposition and struggle allow him to define himself… he basically becomes was he’s not. What is your take on that?

Brieuc: I tried to talk about and respect some of the paradoxes of the game we play: joy and depression, fascination and boredom. There are also some mystical views, and then the cruel and dangerous reality. It’s all about desire or retreat, as opposites. There is something that all ravers can say after a good party, when it feels like everything was in the right place at the right moment. The pleasure was full: « we gave ». For me that idea of « giving » (of yourself, your energy, your time, your moves) sounds like a self-sacrifice. A good one, a bad one, who knows? I keep the answer open, but I’m precisely talking about giving, without taking back in return.  It’s like the idea of faith. We « believe » in something.

KALTBLUT: Obviously techno is one of the important subjects in the book. The narrator is critical about the conservatisms that are embedded in the techno scene, about all the unwritten codes, about the people that see themselves as the self-chosen guardians of the idea of techno… Do you think that techno has lost its ability to be a force of disruption?

Brieuc: Techno is what it is: a non intellectual movement. No words? No speech. No brain cells (left)? No « ability to be a force of disruption ». A journalist at a French radio asked me recently if there was anything political in my book, or in the techno movement and I answered that in the 80s and 90s, things were political because the music was made and appreciated by daughters and sons of unemployed workers in the UK and the US. It was the soundtrack of the self-destructive and disillusioned hard partying people. Regular venues wouldn’t book them either. So, they improvised, they took the right to party, sometimes resorting to violence, both against society and themselves. But today, there is another aspect. I also replied that maybe people think that our habits and pastimes are obscene and ridiculous. But that is also the sign that a society is healthy. I guess one of the first desires of the Palestinian or a Syrian youth, would be to be able to dance all night long like us and do whatever they want… In that sense we are examples and a freedom reference, and that is political. If one day our societies switch back to fascism, these kind of events would be the first to disappear.

KALTBLUT: I found interesting the way you talk about the lack of “core” in this music, to be understood as the lack of the hardcore edge which defined the early days of techno. Do you feel that the current sound has just become too watered down or is it something else which is more about the ethos of techno than the sound?

Brieuc: It is not just the lack of « core ». It’s something else. The eternal problem of the electronic music scene is also its most interesting aspect: the diktat of the dance-floor. Do we have to think about what the majority likes or do we have to stand up for good taste? Artistic values often change and are re-invented, especially in the music field. My theory is that hard and dark music provide humor, classy moments, joy and plenitude. It’s open wide on the community and the energy is spread around, and controlled. Deep, soft, conventional music genres are pretty depressing. They try and hide some social power fantasies and make people self centered. The energy is blocked as a low level. Hard genres of music, experimentations and instruments may seem darker, but they activate good connections in your brain. They explore a whole range of intensity and aesthetics. Maybe genres like deep-house and tech house seem more colorful but they only explore 20% of the musical spectrum and its possibilities. They make people conservative and slow.  It has always been like that, and it will always stay the same. I feel it’s the same for many different scenes, not only in electronic music.

KALTBLUT: There’s this recurring passage about the music that the narrator is expected to play during his live set at Berghain, and when he plays much harder than expected it ends in drama. It’s a dilemma that any musician will know, finding this balance between what people expect you to play and flipping shit over and playing whatever it is you actually want to play. Is this something you feel DJs and electronic musicians don’t do enough and why do you think this is?

Brieuc: I think that behind our beliefs and ideals, there are very down-to-earth things, like business for example. Some characters in the novel are a metaphor of this reality, one that everybody knows. It’s harder to disconnect your mind in a conservative and commercial environment, than during an impromptu and temporary rave. I find that the Club has these two aspects, mysticism and business. It really takes care of the people and avoids stooping down to a vulgar level (the business aspect). You feel that there is a real reasoning as to what our bodies are doing there, and what the surroundings are supposed to resemble: a rave. Or « like a rave ». That’s why I like this place. It’s serious and intense. But first and foremost, it’s serious.

My main character never forgets he’s in a club, and not in a free space. He learned techno in free spaces, 20 years ago. He feels « taken », seduced, fascinated by the magnetism and the sci-fi tension which is linked to the cities ancient history. But sometimes it’s reality sending messages…

KALTBLUT: I remember you telling me that you decided to write a fiction, instead of something with documentary value, because when it comes to documenting there is always a whole lot of romanticizing happening and people often elude all the darker yet defining aspects of the scene, like drug use, violence…

Brieuc: Yes. With documentaries, the various aspects of a musical scene and the folklore that surround it often become exoticized. That scene continues, and has to be continued. I guess that we deserve some fiction, some texts, to illustrate these slices of life, using the same creative modus operandi. It needs to be a living form, not a dead one. Only a fiction can crystallize our times.

KALTBLUT: The end of the novel has this almost biblical connotation to it with this whole idea of destruction which enables a fresh start. Is this something that you think this scene needs?

Brieuc:  No, this is a fresh start for myself. Other types of novels are coming, with other subjects. This one is a metaphor to describe the various phoenix-like lives in a raver’s existence. I like the idea of absolute freedom in literature which allows you to put a spell on something you find fascinating, like a place. And I also like the idea of the « last party ».

KALTBLUT: This is the first book of a triptych, what do you have in reserve for the next 2? The story goes back in time doesn’t it?

Brieuc:  Yes, back in time to the early 90s and maybe even earlier. I finished correcting the second book, which is about Tokyo. It’s about a very particular psychological and social quest in Japan.  I wrote four books in 12 years alongside various movie scripts, poetry books and I also produced a lot of records. Three of these books come directly from my music and raver experience so that’s why I organized them as a trilogy.

KALTBLUT: What else do you have going for the next couple of months?

Brieuc: I’m very busy finishing 2 books : a photo book and a  short novel which will be in stores for the summer. I will also release various albums I produced for artists like Lili Frikh and Le Crut, as well as my own album which is electronic pop and love songs. Hard techno and heavy beats will come again later on.

“Deux Mondes – Panic In Berghain” is on sale in Berlin at Urban Spree and Zadig. The book is currently only available in French, with and English translation soon to follow suit.