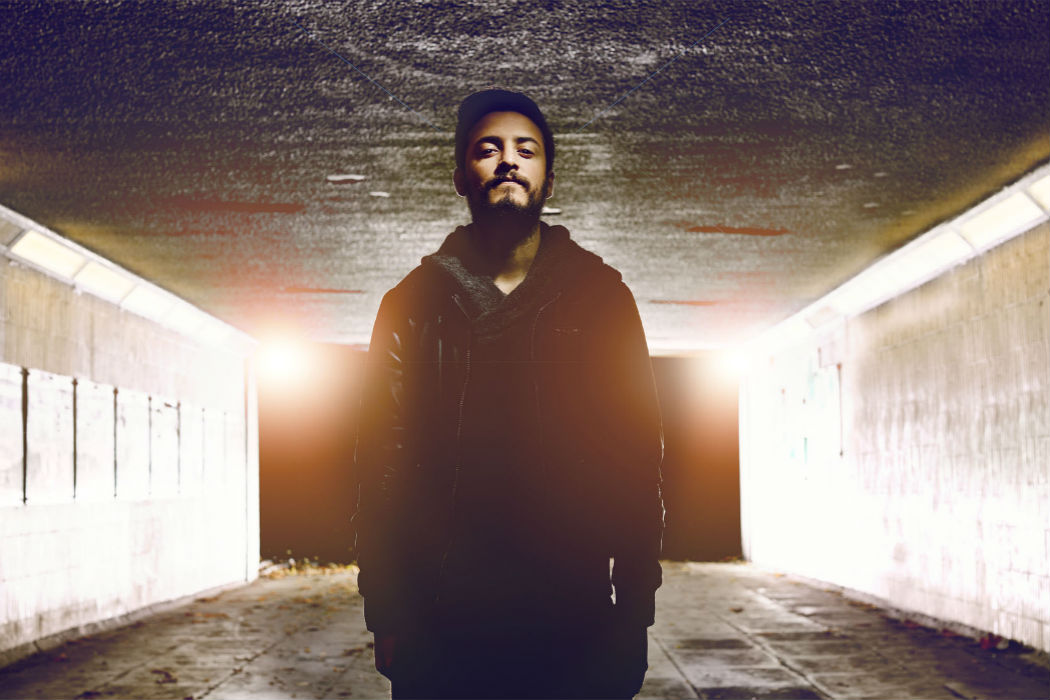 Okraa, the pseudonym of producer and artist Juan Carlos Torres Alonso, makes his trade in mixing together dizzying synth fills with ambient rhythms, forward-thinking melodies and psychedelic vibes. Extracting influences from alt-pop and chillwave, the producer’s latest single ‘Mineral’ is a vibrant canister of steaming sounds and mesmerising textures that offers an entrancing spin on contemporary electro spliced with the bubbling oddities of alt-pop. Describing his own sound as “soulful future garage”, Okraa offers an innovative trip down the roots of magical realism in his new and exquisite single. We spoke to the Colombian psychtronica artist about nature, the importance of colour and what more is to come this summer.

KALTBLUT: Last time we took a look at your work we hosted the premiere for ‘The Truth Shall Set Me Free’, what have you been up to since then?
Okraa: I’ve been touring and recording new material. I had the chance to play this material through the UK, Spain, Austria, Slovakia, Mexico and the USA.

KALTBLUT: Have you been sticking to your process of creation, looking at it as “a very synesthetic experience”?
Okraa: Well, yes…colour is very important for me, and texture as well. I’ve been creating tracks the way I perform live so this has been giving the material something new.

KALTBLUT: What was it like working previously with visual artist Konx-Om-Pax?
Okraa: Very nice, he’s a very talented artist, and had designed the artwork for artists I admire a lot like Oneohtrix Point Never or Jamie Lidell. So that made him even more interesting.

KALTBLUT: Did he work on your recent artwork too?
Okraa: Actually no, this time I worked with a Colombian artist: Juan David Figueroa. He and I had worked together in the past, in fact we grew up together so we have a very similar understanding of arts and emotions. He really gets the way I imagine sound visually.

KALTBLUT: Why do you think this artwork perfectly complements your sound?
Okraa: To begin with, we developed the whole idea for the artwork before the song was even done. I invited him to my studio to see the way I was working on the track and we thought it seemed like the song generated itself through layers and textures progressively. This was different from some of my previous tracks that had more of a song format. Also, given how my music has elements of techno and house but isn’t really house or techno, we thought this needed to be represented through color, once more through psychedelia. This way we developed the whole concept of the song visually and sonically.

KALTBLUT: With your latest track ‘Mineral’, have you found yourself connecting more with nature and your surroundings?
Okraa: Yes, indeed. I thought of Mineral in terms of thinking about the core of things. and how everything you feel is full of layers. The lyrics in Spanish talk about being in contact with nature and the importance of knowing we’re very connected.

KALTBLUT: Where was it produced?
Okraa: The song was produced, recorded and mixed by myself at my studio in Bogotá, Colombia. Then mastered in Berlin by Conor Dalton (Maceo Plex, Carl Craig, Daft Punk).

KALTBLUT: How have your Columbian roots made an imprint on your music production?
Okraa: My Colombian roots have made an imprint on my sound in different ways. The first thing I did was to include Caribbean rhythms inside an electronic context. I’ve also been creating virtual instruments by sampling Colombian instruments like the ‘cuatro llanero’ and ‘marímbula’ among others. So mixing some of this sounds with analog synthesizers and drum machines has been molding my timbres. But after I did this I wanted to not only include musical roots, but spiritual ones as well. For this I’ve been sampling singers from different areas of Colombia like Palenque de San Basilio (one of the first free towns of my country after the Spanish invasion, led by African people), as well as Indigenous rituals to include them on my tracks. ‘Mineral’ has samples from a ritual called ‘Canto Tule Kuna’, practiced by an indigenous group called ‘Kunas’. This way I feel Okraa is a very mestizo project and it is a clear reflexion of what Colombia and my people are: a mixture between indigenous, African, and European culture.

KALTBLUT: Do your current surroundings greatly affect this production too?
Okraa: I think they do, of course. Bogotá being the capital is a big city, very different from most of the country. Travelling inside Colombia has had a great influence on my work, specially a trip to Santa Marta in the Caribbean coast by car, which was 20 hours long. All those landscapes, and talking to people who have had such different lives and opportunities really affects you in many ways. Then after this contrast, going to play shows in Europe, the UK or the USA gives you a whole different perspective. So I would say having the chance to travel and then come back to Bogotá has had a huge effect on my music.

KALTBLUT: What are your next plans?
Okraa: Right now I plan to continue producing my next release which is expected to be out around October this year. Just finished my university degree on music and production as well, so I’m actually in a moment of taking decisions, both personal and professional that will have a big impact on my future. I’ll probably me moving abroad, so who knows, maybe we’ll be seeing each other more often now.

Okraa’s ‘Vulture’ is out now!