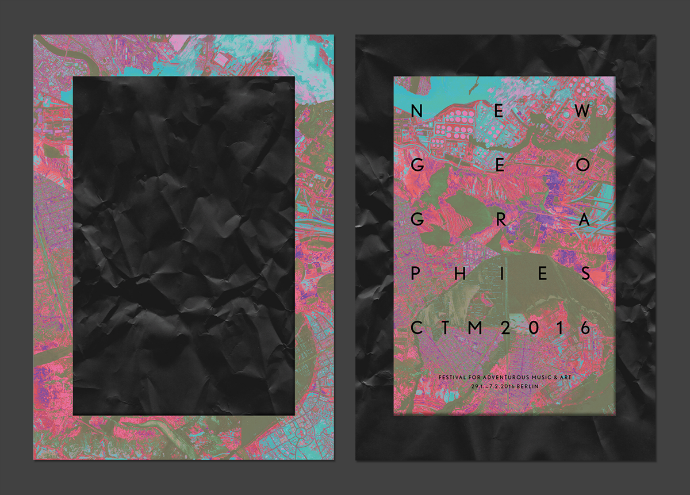 We are pleased to reveal the full CTM 2016 music programme! From 29 January – 7 February 2016, Berlin’s infamous festival is celebrating it’s 17th edition with their New Geographies theme. The event explores today’s rapidly collapsing borders and emerging new hybrid topographies, and aims to provide the tools needed to approach the complexities of a polycentric, polychromatic, and increasingly hybrid music world with greater openness. KALTBLUT will be keeping you up to date with key events during the festival – keep your eyes peeled for exclusive interviews and coverage!

CTM is a prominent international festival dedicated to contemporary electronic, digital and experimental music, as well as the diverse range of artistic activities in the context of sound and club cultures. Since 1999 it takes place concurrently and cooperatively with the transmediale – international festival for art and digital culture, Berlin. Together, the two festivals CTM and transmediale comprise one of the most comprehensive and relevant occasions in the world for reflection on digital culture and, moreover, one with a more comprehensive scope than any usual festival remit. The two parallel festivals attract a broad and diverse public, yet at the same time offer artists, producers, agents and curators a lively platform for informed, thoughtful debate and opportunities to network across the globe. In doing so, they fathom and illuminate the minutely diversified grass-roots level of music and media arts production. Both festivals do much more than simply present new trends and developments however. In their role as partners to the artists, as participants in on-going contemporary discourse, as active network facilitators, information resources, research bodies and disseminators of innovative work, they also make a vital contribution to the further development of critical, innovative music and media cultures.

Special projects and commissions, as well as artists and sound cultures emanating from less familiar countries and localities and often operating on the fringes of the electronic circuit are featured in greater numbers than ever before. Notable input to the festival’s music programme is received from guest co-curator Rabih Beaini, while the CTM 2016 exhibition and daytime discourse programme is created in close collaboration with Norient – Network for Local and Global Sounds and Media Culture.

Are you ready for the huge list of performances CTM is offering this year?