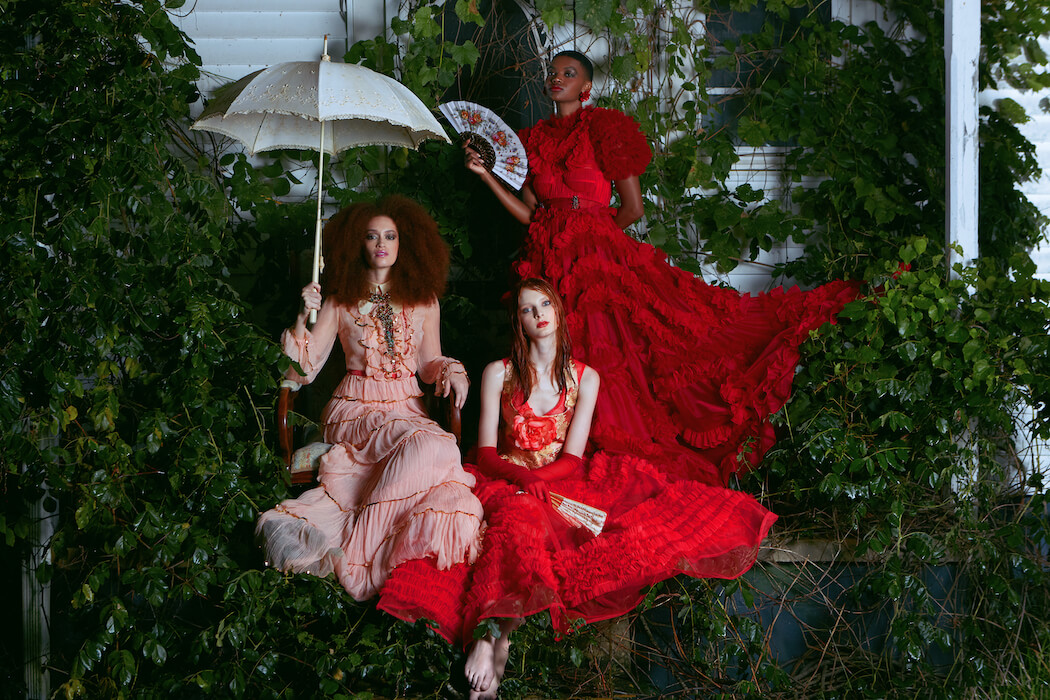 Decadence & Decay ​gracefully blends decrepitness and luxury in a lovely yet unnerving way. ​Aristotle drew inspiration heavily from ​Stanley Kubrick ​while beautifully incorporating an ever-present underlying feeling of anxiety and horror – utilizing a desolate backdrop to highlight the theme of isolation in order to resonate with viewers as they too endure the frustrations of quarantine. Sisters Mirelle, Mylene, and Mila undertake a variety of tasks from picnicking to playing cards to keep busy while donning breathtaking luxury attire, a parallel to the solitude many experienced around the world during the better part of 2020. Aristotle​ shot ​Decadence & Decay​’s video footage on 16mm film and stills on medium format film.

Known most recently for her red carpet work and De Beers campaign featuring Indira Scott, ​Gigler focused on using vintage clothing to highlight the beauty in decay, a conscious decision the creative made to evoke both feelings of being unsettled and enchanted. ​Gigler​’s use of inspiration from both ​Tim Walker and Ryan McGinley​’s photography ​and seamless blending of vintage pieces from ​Gucci​, Richard Quinn​, ​Lidow Archive​, ​Gabriel Held Vintage​, ​Wiederhoeft​, and more work impeccably to create striking yet haunting imagery.

Decadence & Decay is a one-off project for the duo. This spring, ​Aristotle looks to direct his debut feature film which will be produced by ​Chelsea Banard​, whose work includes ​If Beale Street Could Talk​, HER,​ ​Royal Tenenbaums​, and ​Booksmart​, among many other notable motion pictures.

About Aristotle Torres:
Aristotle is a director and photographer based in NYC. His first short film, ​Story Ave,​ was selected and developed through the highly prestigious Sundance Labs. He joins past alumni such as Ryan Coogler, Cary Fukunaga, David Lowery, and Paul Thomas Anderson. Aristotle earned a full scholarship to St John’s University where he would go on to meet the rapper J Cole and serve as his first manager. From there he would transition into music video directing, working with artists such as Nas, 2Chainz, and Ludacris. He has directed commercials and global campaigns for brands such as Pepsi, Red Bull, Under Armour, and Starbucks.

About Mary Reinehr Gigler:
Mary is a stylist and creative director based in NY. She graduated from Wake Forest University with a degree in Art History and completed graduate work in Fashion at the School of the Art Institute of Chicago. She began her career by assisting legendary stylists such as George Cortina, Alex White, and Law Roach before striking out on her own. Mary’s interdisciplinary education, love of art history, and design background have allowed her to provide a unique point of view, while understanding the intersection of fashion, art and design in a whimsical manner. Mary believes fashion is a form of communication, and that each piece tells a story. Her interest lies in how these stories can break down barriers.

Special Thanks :
The town of Mouth of Wilson, VA., Adam Carboni, and Charlie Anderson.