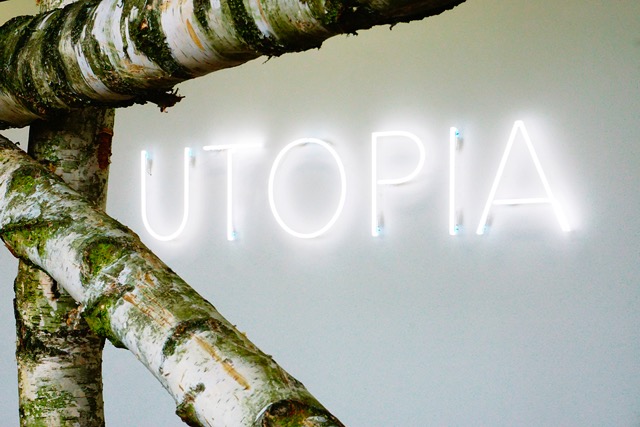 This Friday was quiet and sunny in Berlin. Oranienburgerstrasse was filled with latte drinking black-dressing pug owners, the streets were singing verses of soft gentrification, etc. Then I took a bus to Leipzig with a bunch of weirdos and then it got more interesting. We were invited by the agency Kunst und Helden to attend the opening of CHTO’s « EUROPA EUTOPIA » exhibition. It was worth it. Located in the famous Baumwollspinnerei, the show occupies a complete floor of the Halle 14 exhibition space – that makes 1000 square meters of immersive artwork. Upon entering, a girl gives a paper with the sentences: « This room where you are entering is not a metaphor. It is not a representation. It is for me reality as it is now. Each element in this room is at the same time material and idea. »

I am trying to show the dystopia that the European project has become, while working, beyond criticism, on a new vision of Europe.

Sounds cool, no? Well, it’s CHTO speaking and if you think the style is better than mine, it makes sense because he’s also a writer. Keeping those words in mind, the exhibition space becomes weirdly small. How can a reality enter 1000 square meter when we’re talking about Europe?

It does work because it makes the viewer realize how, under a natural appearance, we are living in a domesticated and fake environment. When we think capitalism and democracy, roots of contemporary Europe, it’s our natural environment as we’ve always been in it, but it’s as true as those poor birches are living trees in the forest. Ya know what I mean? After all, this is post-cynical art, so I’m going for it. You have pictures so I’ll keep it short on the description: There are lots of dead leaves on the floor, a lot of pieces of birch trees held up like trunks or assembled in various structures, there are big photos mounted on light-boxes, black mirrors, a video and words in white neon. It’s full, and it’s full on. But hey, who has enough of empty exhibition spaces with a piece of metal in the middle? Me! Me! Me! Alright, so here you have food for the thought, even though it’s not a metaphor, it kind of is because « The leaves that you are walking on are all the fallen hopes of the past decades ». Ding Dong, do you feel it? Yes, we’re getting there. Europa Eutopia is an exhibition questioning our political continent. By putting in perspective the expectations of our ancestors on this land. For CHTO, the exhibition is the embodiment of all the lost hopes, « memories of destruction, of wars, of exiles and migrations ». He is trying to give a body to the anxiety that rules over our countries. It is as deep as the memory of walking in a birch tree forest. CHTO, under his other alias Camille de Toledo, published an essay in 2009 about Beeches and Birches. In it, he positions the birch as the tree of the massacre, being a witness of the extermination.

Some say the Germanic soul and the forest are one and the same thing. Maybe it goes for all Europe? Like a forest, it is joyful during the day, when the sun is shining through the leaves, but at night it fills up with invisible monsters (except in Berlin, where it’s the contrary). In 1991, CHTO’s father produced the film Europa by Lars Von Trier, it was also not super funny land.

The exhibition is a perfect environment to trigger reflections on what the fuck we are doing with this Europe. For decades, we have been working toward a Utopian future, but since the late 80’s the society gave up and what we have left in a vague soup of feelings where we just try to make it alright for the ego. As an eternal optimist, I couldn’t help but notice that a large amount of the group gathered around a figured fireplace. There was no fire there, but they just gathered. The children, invited to sleep in the exhibition space, were contagiously excited. There is a memory in us humans. It’s a memory of lost hopes, of wars, of extermination and of destruction. But there’s also a memory of resistance, of never surrender, of looking at the light and of throwing all those leaves in the air and making toys out of them. Because humans are a part of nature, and nature doesn’t do eternal winters. There are many different ways of reading CHTO’s Europa Eutopia, and I could only convey mine, so I strongly encourage you to go to Leipzig and to check it out! CHTO is a French artist living in Berlin. It is the visual artist name of Alexis Mital, also known as Camille de Toledo or Oscar Philipsen for his literature and philosophical writings. Europe is a central topic in his practice – as a founder of the European Society of Authors for example. He’s an active and prolific multidisciplinary thinker. Among others he published Vies pøtentielles (2010) and L’inversion de Hieronymus Bosch (2007), is the author of the video and Libretto of the first 3D opera La Chute de Fukuyama, presented in Paris in 2013. In 2015 he already had two exhibitions in the Spinnerei – The Potential Exhibition in March and History Reloaded in May.