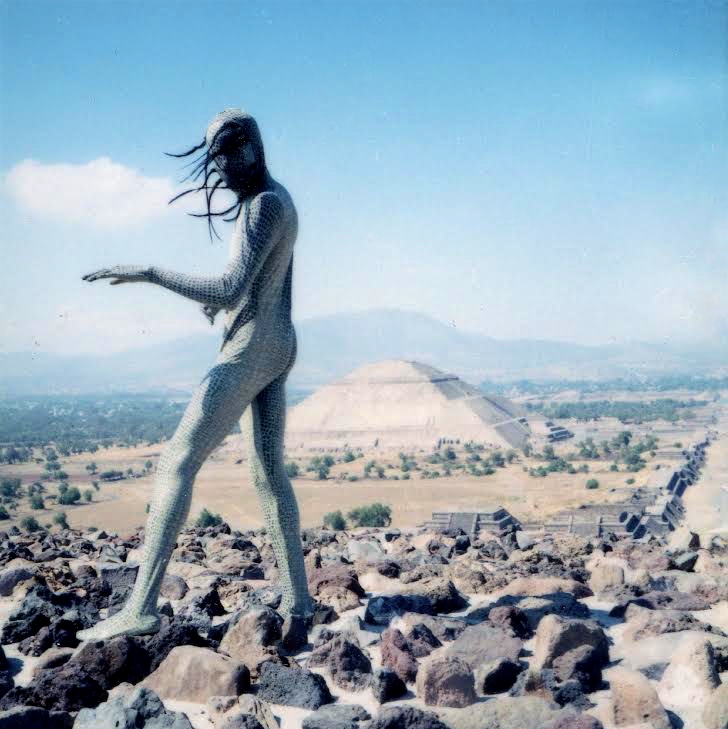 I have known Eric for many years, as the iconic artist behind Whirlpool Productions’ From Disco to Disco, then as a DJ, later on as an encyclopedia of music, fashion and much more, and finally as a friend and colleague. We have had less chances to hang out in DJ booths these past two years obviously, but we still managed to work on a remix for the Detroit x Berlin compilation and EXP__, and today we got to catch up and have a chat, with lots of thoughts on the music scene past and present, laughter, and good vibes.

Dear Eric, nice to finally catch up! Tell us, has this current break from non-stop performing changed your practice?

Well, I have never been a “non-stop” performer; for example if I have a gig in Buenos Aires, I will arrange to stay at least three weeks no less. What I enjoyed about the forced sabbatical was that finally people could imagine how true artists actually live; alone! So far it has not really worked as everyone wants to go back to how things were pre March 2020 and that was wrong; not the way people were forced to live after that date; see if folks had not succumbed to the wiles of a commercialized existence we might not be in the current predicament? This is a huge subject for me, I hope to shed light on it by being an example of what I mean.

So you’ve just released a remix of Ko and the Knockouts for the Detroit x Berlin compilation and EXP__ platform, how was this process for you?

Well, when you asked me, as my agent and friend, if were interested in doing a remix, I was immediately after I heard the song Wasted All These Tears. Then when I started working on it I thought to myself “doesn’t this woman’s voice sound familiar?” A few years ago I was in San Francisco (one of my hometowns) with two people who claim I helped them into the club scene in 87 when I was resident at the 181 CLUB – I had hired Javier as my warm-up DJ and Ruby as our “smart bar” bartender… Years later we went see The Dirtbombs live, around this time they had done a series of club hits in their signature Detroit Rock fashion; Sharevari was in there as well as Strings of Life. We were the only people in the mosh pit wearing Issey Miyake head to toe! Who said punk had to look whack? Anyway the point is she, Ko Melina, was the bassist for them; she didn’t often but she did sing a bit during that concert so when I heard her voice on Wasted All These Tears, I must have recognized something that made me think of the band or her – I remember voices better than faces.

I fully love the Berlin/Detroit connection not least of all as my very first solo single was on Eddie Flashin’ Fowlkes’ label imprint Detroit Wax! My first solo single stateside, as well the label’s first ever release… so yeah Detroit and I get along real well! And I will have to be honest, I follow EXP__ intently though have not truly committed yet? I have too many things on my plate as it is, plus I am from the school of “isolate & create” that is best for me personally I believe. But I like what I hear there and like to be a fly on the wall as it truly is inspirational.

And your California and Europe connections, have they been important to you recently, or where from have you been getting your inspiration?

I still have very strong connections to Paris (my other hometown) so there is a lot from there in the mode of fashion or advertising campaigns and such. And over the years I have grown much closer to Los Angeles than previously; though that is purely because the demographic has changed so quickly from what it was when I was growing up in 70’s California; then I hated the place and wished it would fall off into the ocean! Except Disneyland, I liked Disneyland then… now I know better of course! [laughs]

Otherwise my inspirations come from all over the globe, for example last year with Aikiu we embarked on a production journey with Fulu Miziki from the Democratic Republic of Congo; as well doing things for Leslie Williams who is the principal dancer to The Martha Graham Foundation in New York, or working with Darrin Wiener from Patch Point on various music projects that should soon see light of night too?

What’s important to me is NOT living a linear existence. Compliance I do not do, never have, never will! I also have a motto (well one of many) “just because you can, does not imply that you should.” This is what I live by, and I swear it has kept me from offing a lot of people. [laughs]

As for my other inspirations, they come most notably from literature, nature and sincere thought; definitely not from other purely artistic endeavors. I have never been a “fan” for example; the concept of praise I have never understood; even less nowadays. Perhaps it’s that so much is based on what came before it; not a problem though as I have noticed no one really asks questions these days, they think they know everything because they can do a web search? Complete and utter bollocks, how can a society be so blind I wonder… maybe that’s my inspiration, the lack thereof? [laughs]

Can you give us some insight of what you are preparing from planet Eric to the public for 2022?

This year will see a new three track single on Shaddock by my alter ego Señor Sapo & The Future Sound Of Yesterday Orchestra, with Wolgang Zechlin as guest pianist. The cover of that record was shot onsite by my best friend since kindergarten, Augie Robles, who today is an editor both for Hollywood and indie productions. As for Wolfgang, I met him at a 24-hour bar near my atelier in Neukölln. He said he was a pianist so we went to the atelier and he dropped some parts on this sort of trance thing I was working on… He was in the atelier three days I think? I have no idea how to reach him so if any of you know him, tell him he has a record out with his name on it!

And then a multitude of things will be released on ericdclark.bandcamp.com, some experimental stuff, some things I find languishing on old hard discs… lots of things that I do not advertise at all. Oh and there will be a very very special bootleg that will show up on there, also not announced, so keep your ear out.

On the movie front, I will star in another film this year, this time with director Nicola T. Madsen to be shot in Lisbon. And I will do the soundtrack or parts of it as I did with Thomas Mahmoud and Klaus Lemmke in last year’s Berlin Izza Bitch, where I starred alongside the incomparable Lea Mornar.

And as for events, I will be doing a reading at KW Berlin for Tobias Spichtig on January 22nd at 9PM for those who want to join. And I am featured in Rosa Barba’s The Perpetual Now at the Neu National Gallery until the 16th of January. And… the tea dance I started a few years back with Khan of Finland, THE “T”, is going to be starting at T.V. BAR on a Sunday near you soon as well!

What else…? Oh yes, a next solo lP that features collabs with Scott Matthew, Melanie & Hans Bono, Aikiu plus a plethora more. Then further collaborations on a myriad of things with Jessie Evans, Dmitry from Deee-Lite, Benjamin Weiss aka NERK, Namosh, Leslie Williams, Hilary Jeffries, Mouse on Mars, Blakkat and Babygirl from L.A., Tyree Cooper my bruh for eons now, and Aérea Negrot… I can’t remember all the things I have lined up… I need an archivist!

Interview by Nadia Says (she or they) | Your Mom’s Agency