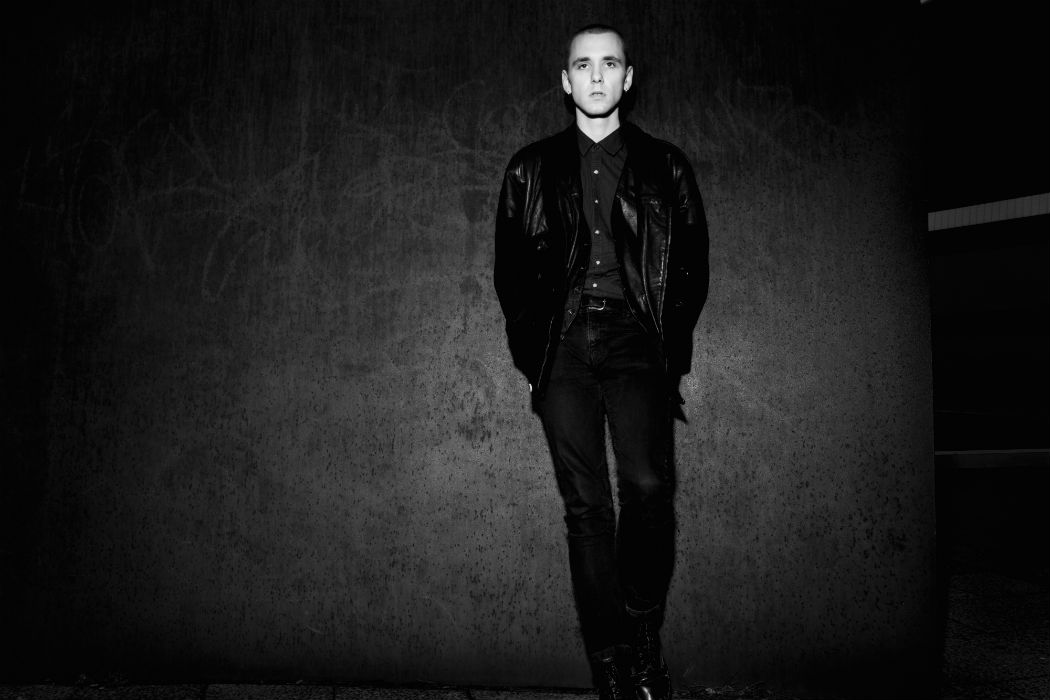 Euphoric post-punk: An interview with Drangsal

Max Gruber is Drangsal, though the man and his persona are so nervous that their turmoil makes them melt into one. Max rarely sleeps, he works restlessly on his music, day and night. He doesn’t dream, but his days are satiate with fantasies. “Seid lieb zu uns, wir sind noch Kinder” –Be kind to us, we are only children–, pleads the mastermind into his microphone, at once delicate and brutal at heart. Already selling out concerts and causing a euphoric state amongst his fans, Max has charm for sure. We spoke to the pop prodigy about and his love for mixtapes, being a little bit of an outsider and growing up in a village with a dark past.

KALTBLUT: Your songs hold a familiarity with the late 70s early 80s music scene, what is it about this decade that fascinates you so much?
Drangsal: As much as I’d love to, I’m afraid I cannot really narrow it down exactly, which is also a good thing, for then it might lose it’s magic. There just seems to be something about the cinematic way these songs have been produced – the mostly fast-paced, bumptious drums and overtly use of percussion and reverb, larger-than-life guitars with chorus and the sound of the Korg Poly 800 and Roland’s U20 synthesizer, endless vocal tracks, exuberant, almost cheesy harmonizing… – and the top notch songwriting itself that simply triggers something in me.

KALTBLUT: How did British music at this time influence you, like Gary Numan, Soft Cell, The Human League, etc?
Drangsal: I love Gary Numan (he still is an amazing live-performer up to this day), I love Soft Cell (Isn’t it nice, sugar and spice / luring disco dollies to a life of vice) and I at least think I know the lyrics to “Don’t You Want Me”, I was however quite underwhelmed by the rest of “Dare”. During the era mentioned by you – the late 70s and early 80s – Britan (and Germany alike) produced some of the bands I hold dearest and that have influenced my music gravely: Prefab Sprout, XTC, The Smiths, Orange Juice, The Cocteau Twins… The list could go on forever.

KALTBLUT: You’ve mentioned Marilyn Manson being a huge influence, but his sound is a lot darker than that era. What was it that you liked so much about him? Do you remember first hearing his songs?
Drangsal: I must confess I do not at all agree with the sentiment that Manson’s sound is that much darker, whatever that may mean, especially when you look at records like “Mechanical Animals” and the synth-laden, theatrical “The Golden Age of Grotesque” (which also happen to be my favorite albums of his). Marilyn Manson just happened to be one of the first things my ears and eyes caught and really the first musician that excited me. He changed my perception of gender, of how you’re allowed to act and look and what you were allowed to say and criticize from a very early age on. I think Manson is to me what Bowie was to a lot of my idols.

KALTBLUT: I read that the area where you grew up was quite religious, did you find any issues growing up and listening to this type of music? Did you find yourself an outsider at all? How did you let that effect your music, if at all?
Drangsal: A lot of southern hicktowns in Germany are very religious and Herxheim is no exception. From when I first was forced to go to church up until the holy communion (which is where I dropped out), catholicism always seemed utterly dull to me. It is believe sheerly based upon suffering and guilt. My parents were quite worried when I started listening to Marilyn Manson, reading De Sade and wanting to watch Kubrick’s A Clockwork Orange when I was still way to young to even understand and properly digest these things, but they were also always very supportive, they even took me to see Manson three times (at 9, 13 and 15-years old). I always intended to look and act like an outsider, but I was strangely never an outcast. I could always be outgoing and engaging if I chose to and whenever someone tried to make fun of me for the way I looked or behaved I just outwitted or simply screamed at them louder than they would at me.

KALTBLUT: I’m not sure if you’ve ever read Marilyn’s autobiography, but he’s clearly a very intellectual person who also loved to read and write short stories. What else did you find yourself doing when you were growing up? Did you have many hobbies other than creating music?
Drangsal: I read whenever I can. Right now there’s lots of books stacking up on my night stand: Yukio Mishima, Kurt Vonnegut, Marquis De Sade, Schorsch Kamerun, Wolf Wondratschek, Knut Hamsun. Most of them by suggestion of fellow griot Fabian Altstötter. I’ve never actually engaged in any classical hobbies. I have a keen interested in serial killers and true crime however and I think it’s fair to assume I know as much about professional wrestling as I know about music.

KALTBLUT: I studied Greek mythology, but I’m interested to hear more about Bavarian mythology that you named a song after… Is this also related to the title of your album, or the overall theme of it?
Drangsal: I studied English and dropped out after a mere 3 or 4 weeks. I’m not from Bavaria but the idea of a Wolpertinger (which is Bavaria’s most famous chimera) is fascinating to me. You take all the parts you like of something that already exists and arrange them to become a new entity on it’s own of which then can be taken from again. The title of my record is, but the name of the first documental mention of my home-village. I like terms that aren’t well-known and thus give the listener no information or any sort of emotional lead. They also invite one for further investigation.

KALTBLUT: What was it about the grisly history of Hinterkaifeck that you had to name a song after it? Have you ever listened to the ‘Sword and Scale’ and ‘Serial’ podcast? They’re seriously addictive…
Drangsal: As I’ve mention before I am deeply interested in all sorts of true crime. I have heard of these podcasts, but I dislike my crime without photographical evidence, I crave my grisly visuals. Hinterkaifeck is just one of the most notorious German murder-mystery cases and that particular Gruber family is part of my family tree.

KALTBLUT: I love this dramatic, layered video for ‘Love Me or Leave Me’ it’s very Cabaret Voltaire! Where was it filmed and where did the ideas come from to produce it?
Drangsal: Why, thank you! Jonas Vahl, a dear friend of mine and talented up-and-coming director is to be held accountable for it. The layer-thing we shamelessly stole from old King Crimson- and Smiths videos, the incestuous kiss arose from my own foul mind… It’s harder to get identical twins to kiss than one would assume, by the way. It was filmed during an intense two-day-period around Berlin and in Poland I think.

KALTBLUT: How do you transfer your music to a live performance?
Drangsal: I try and rid the tunes of all trinkets and present people the bare bones of what makes the songs what they are. It’s still quite painful to me by times as I’d sometimes rather play with a 10-piece band and reproduce each and every detail of the recording, Paul Simon-style.

KALTBLUT: I read that your dad made mixtapes for the pub he owned, do you make mixtapes now? How do you feel about that medium and vinyl making a come back?
Drangsal: Just like every other music nerd I see it as my duty to try and educate everyone in all things music. I am so excited whenever I find out about a band or an album that I feel an extreme urge to tell everyone about it, so I tend to often make mixtapes for the people around me. I think vinyl is great because it’s large and artists have the chance to fuck around with the design a lot. Haptic has always been an integral part of music to me and I hold it very dearly and am glad to be able to decide what things will look like, so I’m of course glad that people seem to be appreciating that medium again.

KALTBLUT: What album could you still listen to over and over again?
Drangsal: Prefab Sprout’s “From Langley Park to Memphis”, Morrissey’s “Viva Hate”, Paul Simon’s “Graceland” and Heavy Heavy Low Low’s “Turtle Nipple and the Toxic Shock”.

KALTBLUT: When and where will you perform this summer?
Drangsal: All of the shows below and so many more I’m not allowed to announce yet.