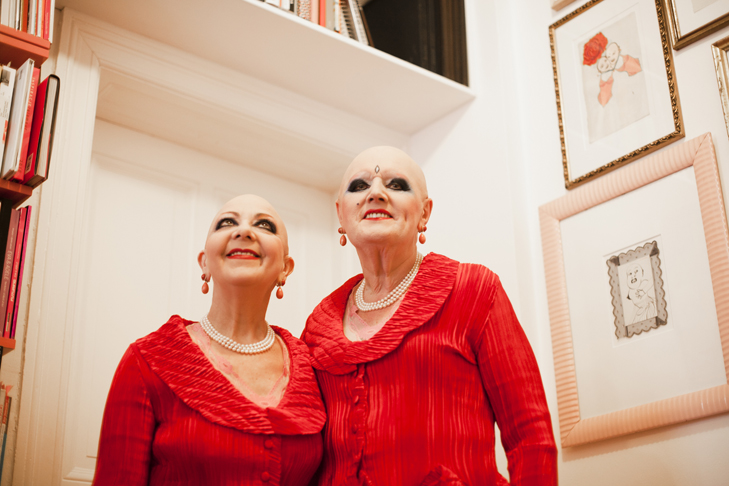 The Art World’s favorite duo is putting together a show for Herstory at me Collectors Room in the German Capital. Opening on the 26th of April, the exhibition titled L’Amour du Risque will feature a selection of works from the couple’s 25 years of extravagant creations. Be prepared to be flabbergasted as EVA & ADELE have assembled surprises for their old and new fans. Our house artist Fleur Helluin met them in their Berlin studio together with artist colleague and superfan Cécile Wesolowski.

Little art quizz: What or rather who is the longest-running art performance? Who have been questioning gender in art and in society since 1989? Who has the best catchphrases since Judge Judy?

Who is in German history schoolbooks? It’s a grey February afternoon in one of Berlin’s western districts. I meet with Cécile Wesolowski and we ring at a traditional orange Altbau. It feels like we’re visiting two distant relatives. We don’t know them, only the stories.

EVA & ADELE met in a Time Machine in 1989, and began to create a unique body of work. Their lives merged with one another, art merged with their life. They became one, creating a sexual identity alternative. Married in 1991 on the occasion of the exhibition Metropolis in Berlin in the Martin Gropius Bau, they have declared to be neither Male nor Female. They are a living myth and appear as Goddesses, without ever changing, born just so. In 2016,  the erudite Julia Garimorth, chief curator at the Museum of Modern Art in Paris quoted Oscar Wilde to talk about the performer: « Life imitates Art far more than Art imitates Life ».

There’s a big difference between listening to a tale and living it. EVA & ADELE are everything Cécile & I hoped for and much more. When the door opens, the performance has already started : shaved heads, perfect make-up, absolutely synchronized outfits. I feared their perpetual smiles would be fake, but it feels so warm.

We go through the rooms of their working space. The vestibule’s parquet is tinted red, it’s so smooth. Drawings and photos in frames cover the walls. A small red staircase leads upstairs, we won’t take it. It feels like being in a temple. They have been showing an everlasting face to the World since forever. Is there still a ‘behind the scenes’?

The question gets answered in the hallway, with this picture. This tender photo has been snapped by the Polizei and shows EVA behind the wheel of a car over the speed limit. She’s here and it’s exactly as if it was the photo from the Time Machine. Above, two photos show them on the toilets. Adele tells us that they took those after a big performance. They are fully dressed with a divine silver neck ruff. Evidently, there’s a natural freshness in the manifestation of the mundane amongst the exquisitely prepared performances.

We continue the visit and chat in the hallway about how it is for them to appear in the outside world. « Whenever we leave this place, we are fully dressed » says Adele. Sometimes, they are assaulted by people and sometimes defended by others. They learned how to avoid confrontation and live as an imperishable performance. We go through their atelier and their display rooms. Everything is incredibly clean and polished. It feels like a Zen monastery where monks and nuns are advised to clean as a form of meditation. It’s a vehicle of absoluteness.

Colors are ordered precisely, organized by medium. There are a lot of paintings around, astutely arranged by size. It’s a homey factory. Adele says that they like to paint more and more. I ask how it works, working with four hands on one canvas. She says that it’s not what matters. EVA & ADELE like to blur the origins of their creations. We take pictures in a room whose doorbell says FUTURING. Adele shows Cécile a german schoolbook in which they are featured.

The duo’s work explores a wide range of artistic and societal questions underneath a glossy flashy layer of fun and lightness. Authenticity and myths, our stiff and frozen perception of Time, Gender, Depth, Museum, Consumerism, and Humour are elegantly challenged. One of their main tool is permanence, a very mystical concept in itself. Underneath the polished appearances is the firm perennial belief in their destiny. They were meant for each other, ADELE tells us. For once, EVA also speaks. They explain how they were always looking for each other before meeting in the Time Machine. Even before meeting, they were EVA & ADELE. Is it a construct if it’s your destiny?