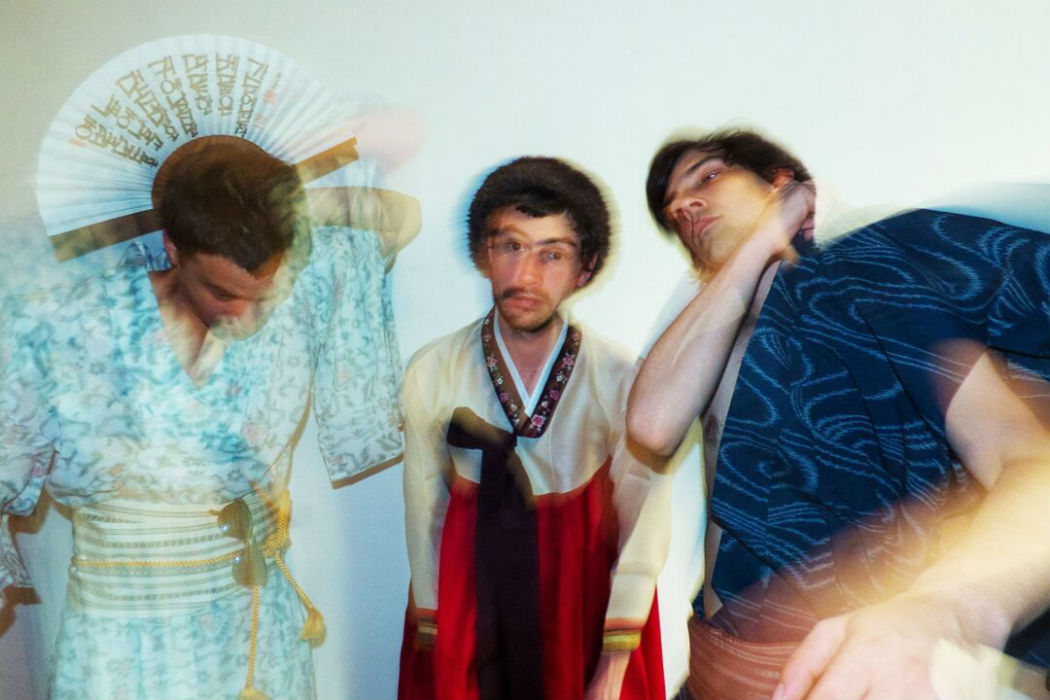 A collection of sounds especially made for your weekend! In January 1958, a UFO was sighted flying over an island off the coast of Trindade. This reported event triggered Caandides imagination. After having narrowed their focus of research by calculating the geographical coordinates of the island, Caandides wrote and played and dreamt of encounters of the third kind in a tropical setting. The album ’20° 30′ S 29° 20′ W’ was born. After the intense recording time, we managed to get the boys to create their very own KALTBLUT mixtape and tell us more about the songs they chose. Find your inner zen, press play and have a read below!


Tracklist
This Heat – ‘Sleep’
Post-punk gurus This Heat open their 1981 Deceit with this insistent suggestion to succumb to a golden slumber, as if to best appreciate the rest of their hallucinated and brilliant record. If not the best song to actually fall asleep to, it is the ideal soundtrack to finger drumming and/or shower chanting.

Woo – The ‘Western’
One of the highlights of this cinematographic 1989 record by the Ives Brothers. Strangely chilling. It probably was a strong influence on many psych-folk bands, such as Animal Collective on records like Campfire Songs, Sung Tongs, and right up to Feels. The ideal soundtrack to getting home late from a party with mixed feelings of love and melancholy.

Stereolab – ‘Les Yper-Sound’
This song is taken from the franco-british outfit’s 1996 Tomato Ketchup, which (along with the following Dots and Loops) indisputably constitutes the very best of their discography. Disco guitar, upbeat drums and sci-fi synth topped with the bi-vocals of Laetitia Sadier and Marie Hansen, create an atmosphere that is theirs alone. The ideal soundtrack to cooking a meal on a first date.

Column – ‘Sensuela’
Before he got Infinite Bisous started, Rori McCarthy made a record with his brother as Column. The result is a collection of mellow and sexy tunes, the climax of which is this song, which features a cold, sleepy, slightly shimmery vocal part, as well as an irresistibly cool guitar riff. « I had such fun today »… The ideal soundtrack to voluptuously ending a first date gone well.

Ramona Lisa – ‘Backwards and Upwards’
This is taken from Chairlift singer Caroline Polachek’s solo record as Ramona Lisa. Exclusively recorded on her laptop with midi instruments, singing right into the computer’s microphone, it’s a very intimate record (only rarely detracted by the cheapness of the instrumentation). She’s got a helluva voice. The ideal soundtrack to deciding to walk to where you’re going instead of taking the subway.

Cluster – ‘Hollywood’
An extract from the german duo’s third record Zuckerzeit, which means Times of Sugar. Hollywood is probably the closest they’ve come to putting such a notion into music. The ideal soundtrack to a sunny sunday morning breakfast if you’ve gotten up late but are still planning on making it a productive day.

Big Black – ‘The Model’
Among the myriad of covers for Kraftwerk’s 1978 electro-pop hit ‘Das Model’, this one especially stands out, mainly because it sounds just as out of place in Big Black’s discography as it did in the German outfit’s. The ideal soundtrack to buying cheap beers for you and your friends at your local supermarket.

Hans-Joachim Roedelius – ‘Halmharfe’
Hans-Joachim Roedelius was half of Cluster before making music of his own. Selbsportrait is a very moving record, and the title gives away the key to its understanding. It’s introspective, always melodic yet constantly weird, a sort of Solaris muzak. The ideal soundtrack to looking at one single thing for a long time and trying to notice everything about it.

Young Marble Giants – ‘Wurlitzer Jukebox’
There is something about Young Marble Giants that makes you think of a calm ocean. Depth in simplicity, emotion in restraint. Wurlitzer Jukebox is a personal favorite, but the whole record is basically flawless and awe inspiring. It makes you want to write songs the way Salinger makes you want to write stories. The ideal soundtrack to just doing stuff.

Pere Ubu – ‘Humor me’
This song concludes Pere Ubu’s first record ‘The Modern Dance’, at a time when it was still a possibility for the band to become big. The reggae tinted guitar / bass / drums groove is an instant catcher, but the true highpoint of the track is David Thomas’ vocals. Simultaneously theatrical, funny, melodic, almost stirring even as he answers his own « It’s a joke! Haha! » with « Well then humor me! », he turns a very cool riff into a fantastic song. The ideal soundtrack to unbuilding old furniture and building new one.

Microstoria – ‘Dokumint’
The tour de force of this beautiful track is making it feel like a pop song, with high-pitched machinist wailing choruses and discreet frozen piano verses. The ideal soundtrack to looking at the scenery during a long car trip across the country