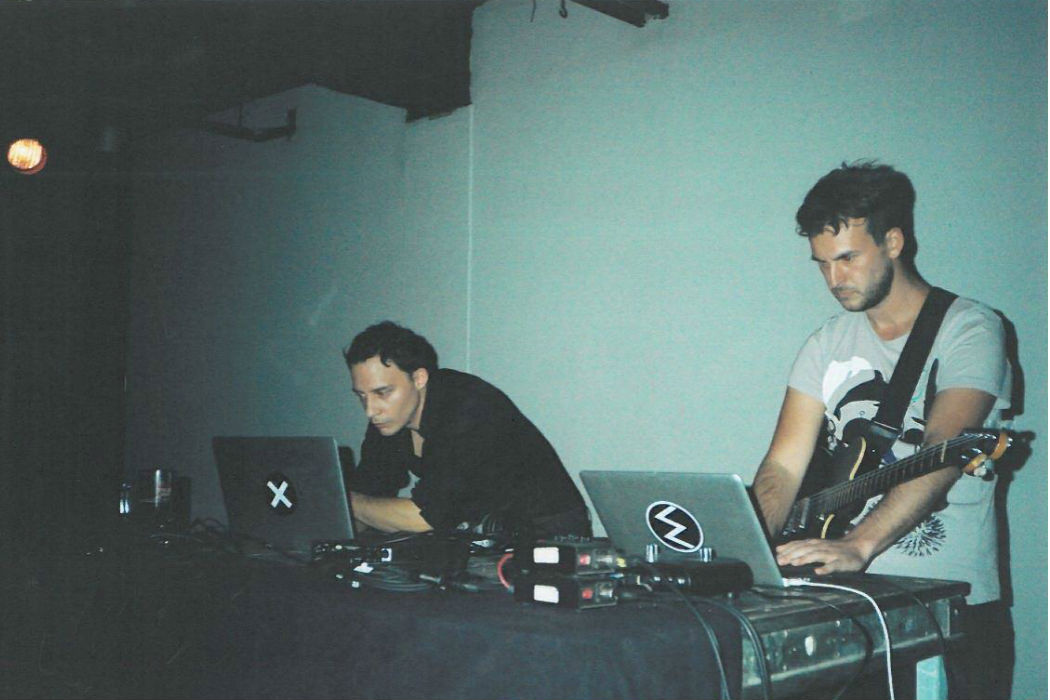 Sounds for the weekend! We have a special mixtape and chat to Budapest-based experimental project 12z. Founders, Bálint Szabó and Márton Kristóf have constructed a substantial body of work, including film scores, studio recordings, and a significant archive of 12z [sessionz] — weekly improvised jams with a shifting cast of collaborators. These sessions were compiled into a self-released podcast which followed their self-titled debut on Hungarian label Farbwechsel. All this is not even to mention their live work, which is at the foundation of 12z’s craft and artistry. With Bálint on guitar, Márton on electronics, and guest member Áron Porteleki often joining on drums, they fluctuate between jagged rhythmic passages, floating moments of harmonic tension, and any other form that emerges, always chiseling structure from the chaos. After jumping onto Nicolas Jaar’s imprint, Other People, and releasing ‘Trembling Air’, we speak to Bálint and Marci about their unique sound and upcoming work.

KALTBLUT: Could you tell us a little about who you are and your upbringing?
12z: Hi, it’s Bálint and Marci, we got to know each other on SoundCloud almost 5 years ago. Then we started to make music together with our only intention being the common meditations via cross genre music.

KALTBLUT: Is music in your blood?
12z: Music is in everyone’s blood!

KALTBLUT: What made you take on this improvised approach to creating music?
12z: Listening to music was a very important part of our lives ranging from the newest genres to traditional music. When we started to make music we felt the process of composing is the core part of making music, not the composition itself but how we explore the way to build a structure. Improvisation is the most natural thing that everyone does in every moment in their lives, even when they are acting. The level and the focus of practice makes the music disciplined. Also when we started the improvisatory music scene was getting very strong in Budapest.

KALTBLUT: Your latest album was your first entirely electronic recording, what made you come to this decision? Do you think it limits your output?
12z: Usually we make music according to our instincts and we made electronic music before several times, it’s just very important for us to select a ‘vague terrain’ and explore as much as we can. In the case of ‘Trembling Air’ our actual topics were using electronic devices as if they were simple acoustic instruments, blending it with our obsession for unique and unheard traditional music from all over the world.

KALTBLUT: There’s almost a sense of chaos in some of the tracks, do you include other people when you improvise?
12z: The chaos seems to be just the representation of being unattentive to the environment, but we can produce it just the two of us, in fact our music can be a lot more peaceful when we include other musicians mostly in our weekly music sessions when we play only for ourselves. However the majority of our recordings are not chaotic at all, some of them are very emotional melodies.

KALTBLUT: Is a sense of collaboration important to you?
12z: Collaboration is very important and we try to choose wisely when it is time for a duo or a trio (with drummer Áron Porteleki), and when it is time to feature any other musicians. Collaboration always triggers a bunch of new ideas, that’s why we asked people to join, that’s how we started the [sessionz] project which we documented fully in its first occurrence.

KALTBLUT: Do you have any side collab projects at the moment?
12z: So 12z runs as a duo and a trio, this year we are working on solo stuff as well, but not just simply in the fields of music but visual arts and poetry, also we still create soundtracks, and recently we started to work on a dance play with our friends which follows a similar working method and approach to the trio’s music.

KALTBLUT: Talk us through the creation of a track of yours, is it triggered by one single sound or a memory of some sort?
12z: We feel our new album’s last track, ‘Trembling Of The Air’ is one of our best improvisations. It was also one of the last possible recordings we planned to include on this release to conclude the one month long recording process. As with other tracks, we chose traditional music samples and instruments, making quick decisions and started to jam for 10 minutes then jump to another setup. Of course some of these impromptu compositions get into a kind of chaos easily because usually we don’t make up rules, but when we arrived to the recording of ‘Trembling Of The Air’ we already reduced the number of our sound sources and grow our inner child to create something mature.

KALTBLUT: What instruments / equipment do you use?
12z: The setup is changing sometimes to put ourselves in uncomfortable situations but throughout the years we used mostly guitars, guitar effects, drums, computers, rare percussions and wind instruments, field recordings, samples, drum machines. Also it’s important part of these discoveries to use the equipment we have improperly, for instance creating techno with only a guitar effect. When we imagined a different sound then usually we featured other musicians who owns a specific equipment like vintage analogue or modular synths, brass instruments, gamelan instruments, vocals, and so on.

KALTBLUT: Do you work with any other mediums?
12z: ‘Trembling Air’ raised a lot of topics we delved into. We started to collect old stereographic photos from the ‘golden’ age of colonialization, started to write poems, haikus to add extra layers in the process of understanding our own music. Also we created video installations for our live performances with super slow footages of the sun’s surface and visualization of the weather events of Earth, keeping them unobtrusive to the music we play.

KALTBLUT: How do you transport your music into a live performance? Is it completely randomised also?
12z: Live performances need a totally different state of mind, we have a lot of conceptions and ideas before we go on stage but we try to let them go and really just focus on the moment, to ride a flow together and concentrate on each other as much as possible while building a soundscape. A few times we also tried to reinterpret our music, we even performed both of our Other People releases in the form of live acts and recently we played a double album launch concert in Budapest for ‘Trembling Air’ where we used mostly live instruments to present the whole release with a different, less electronic sound.

KALTBLUT: How did you become involved with Nicolas Jaar’s imprint?
12z: To make a long story short, Marci was acting in a feature film and the director of photography asked him to make a soundtrack for another feature entitled ‘Free Fall’ by renowned director György Pálfi. The music was rejected in the end because of the short deadline, and was compiled into an album called ‘The Free Fall Inspirations’ on Bandcamp, which was found by Nico a few weeks later and he offered us a digital release, and also asked us to record a new vinyl for his label. Since then we met him in NYC and we agreed, it is easy to spot good human beings just by listening to their music.

Trembling Air is out now on Other People