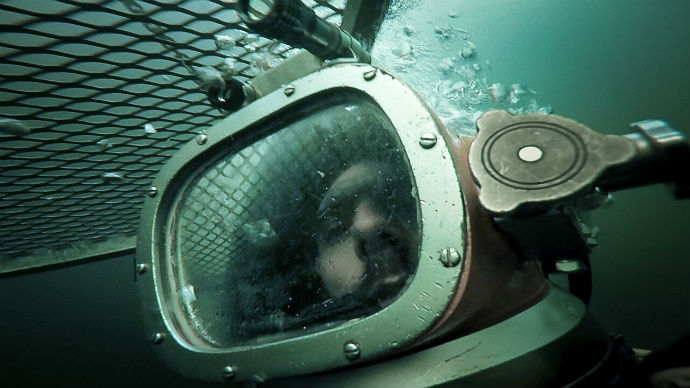 Today KALTBLUT is hosting an exclusive trailer for the upcoming release of Eric Holm’s ‘Barotrauma’. The source material for ‘Barotrauma’ was recorded in the Nordic fjords south of Oslo, an adjunct to Eric Holm’s training at the Norwegian School of Commercial diving (Norsk Yrkesdykkerskole). While he was training world oil prices collapsed, so left with an uncertain future Holm decided to record and film his dives, capturing the lonely calm of his isolation in the dark water. Like environments on land, the seabed is populated with machines, industry, and noise. Interference is everywhere. Engines, equipment, drilling: it is a mirror of on-land environmental exploitation. These six tracks were created over the last two years, using the sounds Holm collected from the sea floor and subsea equipment, which he then manipulated and processed, shaping a vision of his time in this underwater environment.

Eric Cardinale was born in New Jersey and moved to England in 2000. His first album Andøya, composed primarily out of two 30 second recordings of power lines in arctic Norway, was released on Subtext in 2014. Barotrauma will be released on CD and digital formats on the 24h of June 2016, pre-order it here.