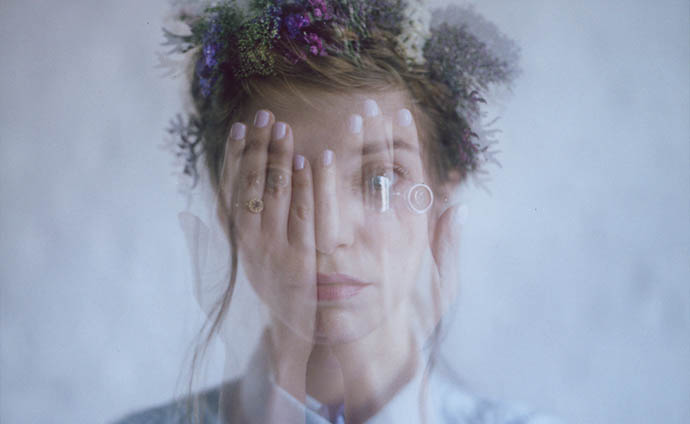 KALTBLUT is proud to host the premiere of “I´d Go” the first single of Sarah P’s upcoming mini album “Free” (out on her birthday, 14/12/15). This song was the last brick of her EP. It was written and recorded very spontaneously, in one afternoon and it is a rather positive song about deciding to move forward – no matter what.  On her first solo EP, the Athenean songsmith is exploring the journey of breaking free from one’s demons. Free is unfolding in seven songs and it’s divided in two parts/emotions. The first part is about those moments when one knows that it’s about time to change things but because of the society’s rules and standards, this person is left high and dry. The second part is watching this person revolting again all those philistines who put him/her down.

“I’d go” is the exact moment when the heroine of this story decides to get out of her comfort zone and to -reluctantly in the beginning but fiercely by the end – fight and break from her chain ball. Music wise, it’s an uplifting pop song that will take you on a mind trip.

“I’d Go” is released and so the journey begins! With this old-school, pop song I’m reaching to you and call you to action. You probably wonder “what does she want?”, you probably think of the social media buttons (like, share, favorite, heart). Well, what I have in mind is completely different. What I have in mind is not about me and/or my music. Music helps me communicate my ideas. Music is the way but not the core. Our times are historic. Every single day we learn about something that’s affecting our lives in a direct way. Maybe ten years ago (or even five) you’d hear about the Chinese Market crash and you’d be like “whoah, it doesn’t touch me”. You’d hear about the refugees that are on a survival march and you’d switch to another station. Now, I want to believe that each of us is taking a side. I want to believe that our talks are not only about our new car or the new restaurant that’s opened in our neighborhood. I want to believe that we’re all noticing that the politicians and the big money gurus are failing us big time. I hope that this makes everyone realize that it’s about time to take on our responsibilities. What we see happening to them is likely to happen to us because the world is spinning round and round. What we can do is learn from what went wrong. And never do the same again. It’s about time that this cliche advice becomes more than a buzzword.

I wrote two different songs under the name “I’d Go”. I kept the first one for later on because I wanted the idea of it to grow bigger inside my head. The second one – the song I just released – was written very spontaneously during an afternoon blur caused by stress and bad news. So spontaneous it was that I recorded it with my phone. The first “I’d Go” was heavy in my heart while the second one was exactly what I needed to hear at that moment. If you pay a little more attention to the lyrics and less to the lighthearted mood of the music, you’ll realize that this song is about a struggle that many of us are getting through during these weird times. Whether you just got fired or you’re crossing the countries to find a home because somebody took your home away from you, you’re still a human. We’re all still humans and we can pick what’s defining us. It’s up to us to decide if and how we’ll survive these times. Sure, we’re not perfect but nobody is. But if we fight together for the best of all of us, wouldn’t that make Earth a better place? We have to fight together in order to learn how to coexist, how to accept the difference, how to respect our neighbor. Turning to the edges never helped. Believing in one and only theory/God/idea makes you a maniac. Our brains have room for more than that. Science, Religion, Spirituality, Ideas are broad. We should use our brains and our bodies for the best. Why something so logical is so hard to understand?

“I’d Go” is part of my EP that will come out on the 14th of December 2015. On my birthday. The EP has 7 songs and it’s called FREE. I decided to found my own label that’s called ERASERESTART that’s going to be the start of a movement. For the movement’s distinctive I picked the wolf. Let’s break it down to meanings.

Sarah Anna Psalti, known as Sarah P., is a singer, songwriter and actress hailing from Greece. Her music career started in 2010, as the frontwoman of the Athenean dream pop duet Keep Shelly in Athens. After she parted ways with the band in early 2014, she relocated to Berlin to start fresh. Sarah P. has collaborated with many artists, including Sun Glitters, Mmoths, The New Division and many more. Her own music is minimalistic and inspired from nineties sounds. The genre she identifies with is Pop/R’n’B. While having a sinister music touch, her positive intentions deliver a clear message. Sarah P. is not just a person, but a movement that empowers every single person who’s about to begin new. With her music she invites everyone to pack the bad memories in a box and start a journey towards becoming their own dream heroes.