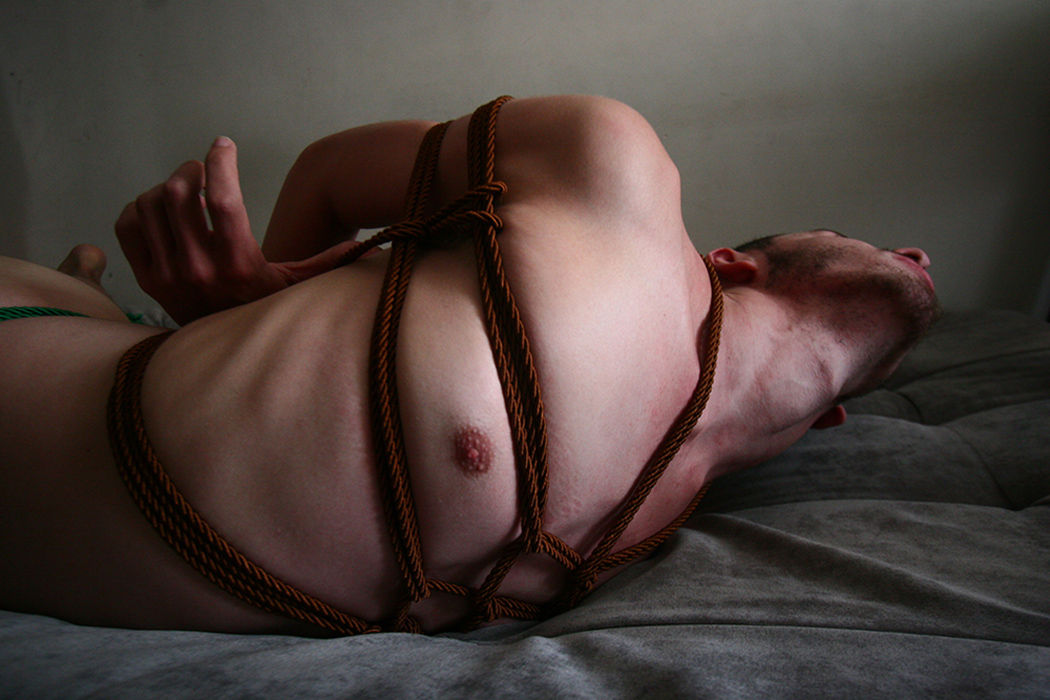 Fabio da Motta is a Brazilian photographer, based in Sao Paulo. In his projects he works with the relationship between body and space. Strong colors and nature is often present in his work, and in recent years he has also been exploring bondage as part of his compositions.

KB: Bondage is often associated with Japanese shibari. So, how and why did you first get interested in bondage?

Fabio: My first encounter with Shibari was many years ago, during an editorial I was shooting for a fashion magazine. I had hired a shibarist to do some knots on the models, and I ended up watching the person preparing the models. I became fascinated with the process, the act of tying. However, it was just in 2015 that bondage really became a part of my images. At this point, I wanted to add a new element, or an actor you could say, to the scenes. Something that could interact with both the people and the space. My work is very inspired by Shibari, especially because it is a bondage that mostly focuses on the aesthetic aspects of the art, or the beauty of tying.

This beauty is something that I try to bring to my images. At the same time I mostly prefer to use the word bondage, when I am talking about my work, because I don’t follow all the rules and methods of Shibari. Without the restraints of a specific term I have more creative freedom, being able to try all sorts of materials I think can contribute to the scene I am working on. One could say that my work is a mix between Shibari and other types of bondage, but that I always try to focus on the aesthetics of the act of immobilization, emphasizing its beauty.

KB: Where did you learn how to do it? How difficult was it to learn?

Fabio: Recently I started to have classes with a renowned Brazilian shibarist. Before that, I learned everything through research and a lot of trial and error. I had a similar approach when I started with photography. Even though I did attend classes l learned mostly by doing. I am not a very academic person, what drives me is curiosity and intuition. When I feel the need to express something that I do not know how to do, I always go searching for the tools and methods that can materialize my idea.

KB: Do you also take the photographs of the people you tie up? How easy is it finding models?

Actually, photography is my profession, so the images are my main work. As I said before, bondage became a part of my projects when I wanted to add it as an element in my images. As I began sharing this ongoing photo series on Instagram (@damottafabio), more and more people started to contact me interested in being a part of the project. A lot of people also contacted me wanting to experience bondage, on themselves or as a performance. It was because of this that I started Mottabondage, which is a performance that I have been invited to do in night clubs, in fashion editorials, but also by people that want to be tied up themselves, as a private experience.

KB: Your bondage is very traditional but very modern. The colours, the patterns, the position, there is a pop blend. Where do you get inspiration from?

My inspiration comes from my daily life, the environment I live in, the things I see. My use of color, flowers and other materials is a way to soften the bondage, emphasizing its beauty instead of the more aggressive aspects of immobilizing another human being.

KB: What is a famous person (dead or alive) you would like to work with?

For sure I have some people that inspire my work and that I would love to work with. Instead of one I want to mention five. The director John Waters, drag queen Violet Chachki, actress Dita von Teese, photographer Robert Mapplethorpe and the actor Divine.