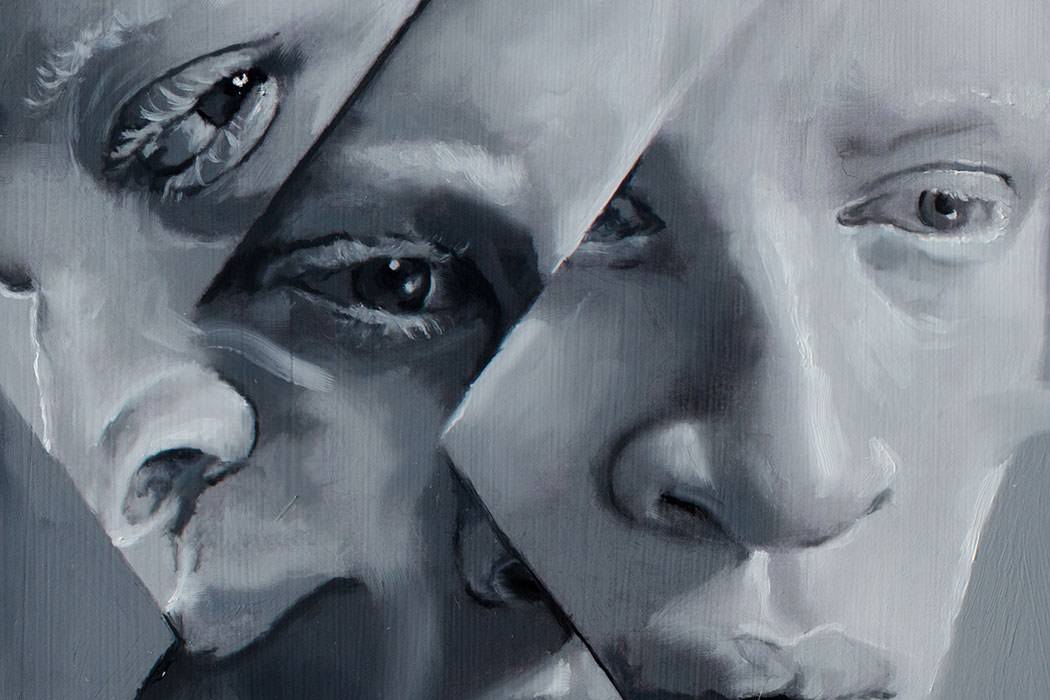 Sven Ballenthin is a Berlin-based artist, who has been working on his Identity series since 2013.  After being turned down by Berlin University of the Arts for 12 consecutive years, Sven Ballenthin was finally accepted in 2012, only to leave months later. Since then, Sven has been painting his signature series, ‘Identity is a choice’, which has lead him to gain international recognition. Not only has his work been featured in prestigious art blogs, television, and press, but his success has also spread into the world of fashion, working on multiple projects with model, Shaun Ross and designer, Nina Athanasiou. Interview by Will Norton.

KALTBLUT: Where did your initial inspiration for the series come from?

Sven: I’m very interested in beauty and the question behind ‘what is beauty?’. I remembered the statue of Nefertiti in the Neues Museum in Berlin, her ears are destroyed and only one eye is left, but it looks very beautiful with the distortion. So I started this idea, maybe I can choose very beautiful people and destroy the surface, to get in there and see if their beauty still exists when I destroy them on the surface, and the rest of it was just a process. I choose people who are beautiful, but they have something extra that I cannot describe with words, it’s like yes, these people have it, but these people do not. I can’t say what it is, it’s just something I have a feeling about.

KALTBLUT: How did you develop your style?

Sven: It started out of frustration. I asked myself, when I have done this for the past 13 years, and I haven’t got in to study, I was like, maybe I have to create my own style, I have to have my own style as an artist. I felt like I was searching the galaxy, looking for my style behind every star, but it was impossible. How can you find yourself, or your style, when everything around you influences you? So I decided instead I had to go the opposite way and reduce everything to very small piece of myself. Just 1 size, just 1 subject, just 2 colours, just black and white, and just 1 day for a painting, they were the ingredients. Before this my work was never me, it was all influenced by the masters, but this series is really me, it’s really mine and it’s been my starting point for the past three years.

KALTBLUT: What is happening next with you and the Identity series?
Sven: I don’t have a plan, I never know what is going to happen, or who I will meet next. It’s gone from lots of people wanting to be painted to more and more people wanting to buy. I would like to start something in sculpture, and I’m trying with 3D also. But with this series it’s like a feeling that I have to do this and I have to feel it. I can see a lot of potential; for the last 3 years I have only been painting in black and white and I’m very proud to make my work in this way. I want to continue the series as long as possible, maybe to death because it has worked so well. I guess I am more interested in the process and the development, rather than the next step, because I don’t know about the next step. I never knew it would come to this, I never know what will happen tomorrow. I just go with what comes to me.