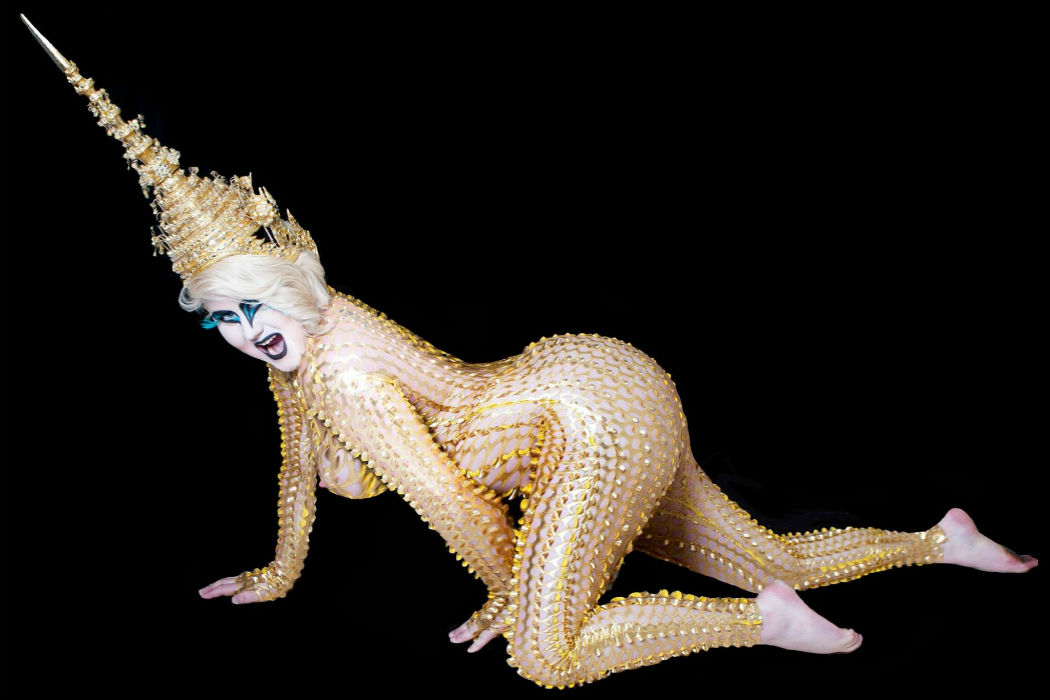 Glam Rock from Beyond: SpaceCream – An Interview

Founded by lead singer Savannah Pope, SpaceCream is a Glam / Prog Rock band from Hollywood, CA. Hailed by fans as “Anne Wilson starring in Bowie’s edition of Rocky Horror Picture Show,” SpaceCream won the gold medal at 2014’s LA Battle for Vans Warped Tour at House of Blues Sunset. The group has played all over Southern California, including sold out shows at the Viper Room and Troubadour. Their music is accessible yet complex, lending a voice to anyone who feels they were born in the wrong generation – or on the wrong planet! We had a chance to speak to the band from outer space to find out what they’d been up to recently.

KALTBLUT: Glam rock isn’t (unfortunately!) what you see so often anymore, at least in many parts of Europe these days. What is it that drew you to this style of music and performance?
Front-woman Savannah Pope: Haha, it’s not what you see in the US either, and I like that. I’ve always been an outsider, which is what drew me to glam rock in the first place. I was a very bizarre child, so books and fantasy became my escape, and in a sense I still live in a world of my own. I was never great at following rules, so I found ways expose myself to mature material from a very young age. I discovered Rocky Horror Picture Show when I was ten and it shattered my universe. It was sexy, stylish, weird and smart – everything that mattered to me. I even had a Rocky Horror themed birthday party when I turned eleven, much to the chagrin of my classmates’ parents. I discovered Bowie when I was fourteen. I was actually in reform school at the time. Most of our music was monitored by the staff there, but one day a gym instructor just let the radio play while we worked out. I was on a treadmill in a cheap trailer, trapped in the middle of Noweheresville, Virginia when I heard Bowie’s “Rebel Rebel” for the first time; and I swear, I felt like it had been written just for me. Every descriptive detail of his “hot tramp”, from funky hair and a ripped dress, to a competitive sense of recklessness, described me to a T. That’s the wonderful thing about music – it transcends time and space. How amazing is it that a song written decades ago on a faraway continent could change the life of a little girl in rural America?

Queen, Lou Reed, Morrissey, Amy Winehouse – these artists touch me on a personal level because they’re different. I’m not interested in making music that sounds like everything else out there. I’m not interested in fitting into anybody’s idea of normal. I just want to write and perform in a way that inspires others to be unashamedly, uniquely themselves. We call ourselves a glam rock band because we are following in the theatrical, rebellious footsteps of that genre’s outlandish forefathers – but our real goal is to establish a genre of our own that can influence modern society in a positive and artistic way. Above all, we strive to make great music.

KALTBLUT: Was this mutual love for music how you all met and decided to create the band?
SpaceCream: Well, the band is mostly Savannah’s brain-child. The songs on this record had already been written and recorded when we joined last year, so hearing them was a huge part of why we were drawn to the project. We are all into glam and prog rock, but our influences are pretty extensive; Savannah’s are, too. Working on this project has been really exciting and the audience response is remarkable. So really, it was our mutual love for SpaceCream that brought us together.

KALTBLUT: Do you think that rock music has evolved for the better over the past few years
Savannah: In my opinion, there’s a striking lack of contemporary rock in today’s pop culture. When I turn on the radio, most of the new music I hear is pop, electronic or rap. Not that I have an issue with those styles – I listen to a bit of everything, and happily . I just think that young people need to be exposed to a resurgence of thought-provoking rock music on a large scale. We play a lot of shows and get to share the stage with some killer bands who are consistently creating new material. As long as people continue to evolve, so does art. Music is always getting better – it’s just a matter of whether or not that music gets heard.

KALTBLUT: Was the Rocky Horror Picture Show something you purposely aimed to associate yourselves with, or was this just by chance?
Savannah: For the most part, it was unintentional. When you’re heavily influenced by something, it’s bound to show up in your work. As Joni Mitchell said, “Love is touching souls / Surely you’ve touched mine / ‘Cause part of you pours out of me / In these lines from time to time.” Our titlular track, SpaceCream, was definitely a nod to ‘Frankenfurter’, though. Couldn’t help myself!

KALTBLUT: You just had your album release party for “Pterodactyl Sky”, could you tell us a little more about it and the production process?
SpaceCream: That was SUCH a fantastic night! We announced our release with a concert at The Mint in Los Angeles. There was a line down the block and the crowd was amazing. Performances like that make everything worthwhile. The production process was long. Savannah recorded the album at Kitten Robot Studios with two session musicians and the former guitarist, Paul Boutin, before we even joined the band. Then SpaceCream went on hiatus for months and the album was left unreleased until we joined. In the meantime, Savannah pored over the details with our engineer Paul Roessler (Nina Hagen, 45 Grave, Eliot Smith) and wrote a lot. We’ve also been writing arrangements together, so we’ll have enough material to start recording again soon enough!

KALTBLUT: I love your album cover, it reminds me of the cover for Terry Gilliam’s Brazil, was that what you were going for? Who do we have to thank for that artwork on the album?
Savannah: Thank you! I think you’re talking about the back cover – me with the wings. That’s merely a happy coincidence. I love Terry Gilliam’s visual style and The Adventures of Baron Munchausen is one of my all-time favorite films. So I’m flattered to hear there are parallels! The back cover was a combined effort by myself and our incredible photographer, Lori Hutchison. The actual front cover was all Lori. She’s insane – I just gave her a basic idea of what I wanted, and she created an alternative universe filled with stars, a moon, and Pterodactyls. It’s amazing to work with artists like that! I put the outfits together with the help of Fashion for the Stars, a bunch of thrift stores, and my good friend, Canaño.

KALTBLUT: I have to ask, what exactly is SpaceCream?
Savannah: Have you ever watched The Man Who Fell to Earth? It’s one of my favorites. In the film, Bowie plays an alien who dons a human suit and ventures to our world in search of water for his intergalactic family. In one scene, there’s a flashback sequence that demonstrates what extraterrestrial sex looks like. Basically, these skinless, genitalia-free creatures spin around in zero gravity, rubbing cosmic spunk all over one another. I was watching the movie one day and thought, “SpaceCream!”

KALTBLUT: Is there was an era where you think you’d fit in comfortably?
SpaceCream: We probably don’t belong on this planet. But in a sense, perhaps SpaceCream is happening exactly when and where it’s supposed to. Like Savannah said, rock isn’t getting a lot of hype right now. We’re a rebellious bunch, and now we have a cause.

KALTBLUT: Ultimate artist that you’d duet or record with?
Savannah: God, so many people! I admire a great number of artists. Of course, working with Bowie or Freddie Mercury would have been a dream. I’d be thrilled to do something with Beck or Lady Gaga, to name a few.

KALTBLUT: And finally, when are you coming to Europe?
SpaceCream: We love it over the pond! As soon as we can, we’ll be on the next plane!

Get ready for SpaceCream’s outrageous exclusive performance for the #LAFashionWeek closing night hosted by Art Hearts Fashion at the exquisite Taglyan Cultural Complex on March 17th! Join for the cultural event of the season featuring celebrity designers & artists! RSVP here.