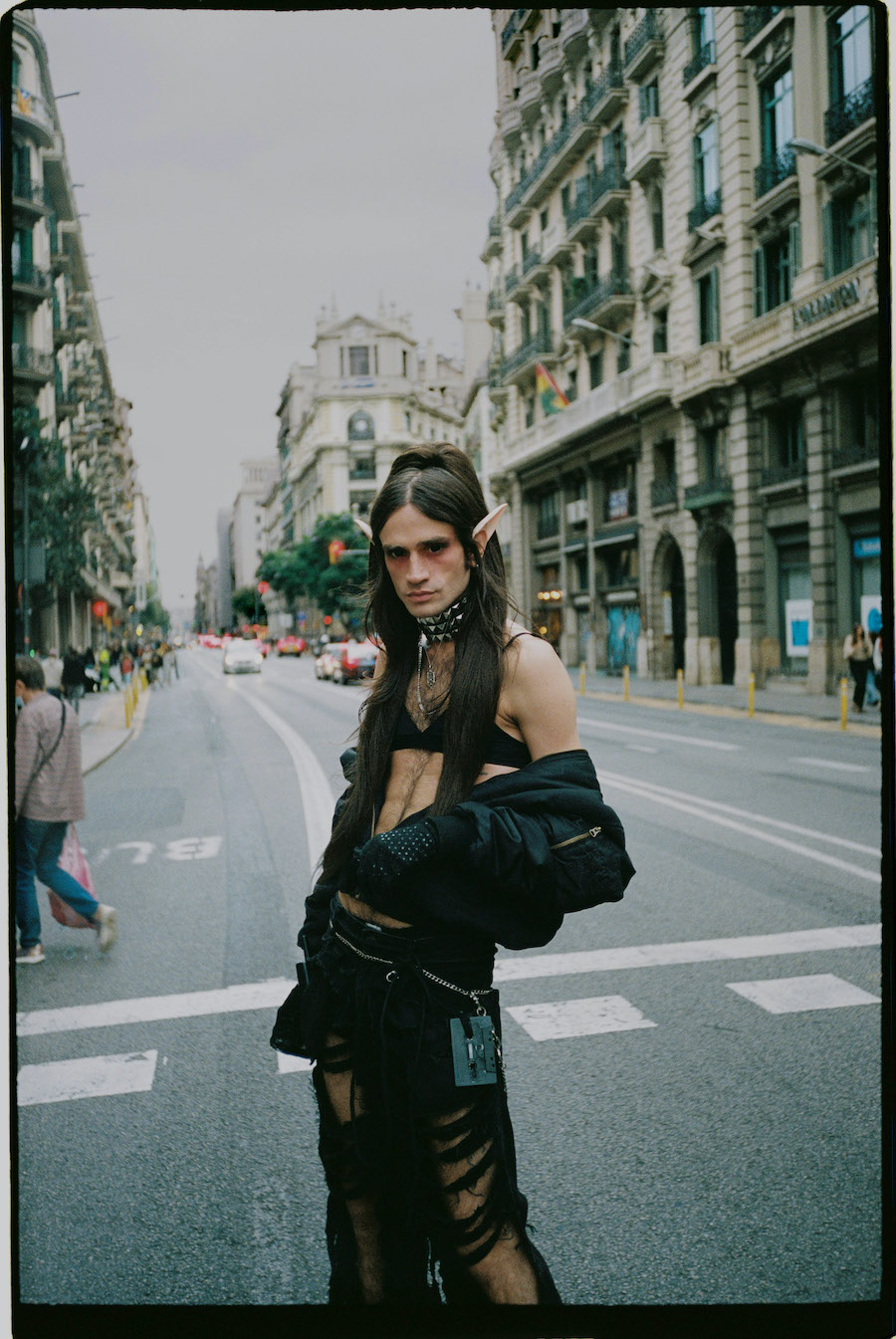 HOUSE OF (S)PUNK is the record label founded by La Fraicheur and home to the young pandemic-born queer electronic scene of Barcelona. Its mission is to highlight the talents of this queer, trans and cyborg generation who, younger than the existence of techno itself, grew up already surrounded by the diversity of its wide spectrum. All photos by Manuel Cardozo

Raised in a melting pot of techno, acid, trance, hardstyle, EBM, electro, Makina, glitch, breakbeat, gabber or Eurodance they spit it back out blurring the lines in a special playful blend of fast-paced neo-rave sound.

HOUSE OF (S)PUNK is home to a scene born from the challenges and restrictions of the pandemic, a generation that had always lived in clubs and, with their closing, had to take matters into their own hands to keep living the culture they breathe. With no DJs and no parties, under the constantly rising pressure of the pandemic void, they had to become their own experience providers, DJs and musicians they weren’t allowed to see anymore.

Just like a global warming-induced wildfire, their spontaneous auto-combustion is what triggered what would be understood months later as the new queer pandemic scene: from creating DIY intimate raves following new formats and formulas, free from the industry’s standards, to being stuck at home learning DAW and productions, these young new talents ooze an enthusiastic love for rave culture and a fresh new take on what club music and club culture can be.

HOUSE OF (S)PUNK is home to the artists that crafted the soundtracks of (S)PUNK, La Fraicheur’s party series in Barcelona, shaped by and for the pandemic’s new reality. The self-managed DIY intimate transfeminist queer party takes a stand against the general movement of the techno industry relentlessly moving towards more: bigger events, longer hours, and higher entrance fees. Instead (S)PUNK positions itself against techno-consumerism and is focused on catering to a responsibilized audience, not seen as consumers but integral elements of the party, shaped by their behaviour. The event, with very limited capacity and an alternative format, was created around queer people’s needs: respect, freedom, safety, affordability and work.

At a time where queerness is being appropriated by the international techno scene, used around the world as an element of cool, reduced to a mere trend, dresscode or lifestyle branding while the positions of power in the industry (club owners, promoters, budget holders) remain in the hands of cis-straight people, (S)PUNK works the other way around. The party is created and managed for and by queer people, financed by queer people, redistributed to queer people, reclaiming the culture that has always been ours, reclaiming our spaces and our moments.

(S)PUNK is working against the “tyranny of the cool” that has sucked the creativity out of our culture and forced every queer party around the world to look the part to be legitimized on an international level, therefore, reducing itself to formated clichés and lazy generic formulas. To enforce this shift, the Instagram account of the party remains private to protect our freedom, our identities, our art, our fashion, our relationships, our dance moves, and our connections. We are not trying to become tomorrow’s new cool queer product for the straight gaze and terror money, we live, dance, play, and create with and for ourselves.

HOUSE OF (S)PUNK VOL.2 THE ARTISTS

Barcelona-born and raised, Manel De Aguas is a queer trans-species cyborg artist, performer and producer who explores the wide field of electronic music from trance to techno to ambient. In his cyborg music experimentations, he creates sounds from the cybernetic fins connected to his skull allowing him to hear the weather: atmospheric pressure, temperature and humidity.

After a hyper pop/techno hybrid on VOL.1, Manel De Aguas follows his creative exploration on VOL.2 with a heart-wrenching electronic piece that’s hard to categorize. The various stages of grief that comes with heartbreak and the emotional challenges of deconstructing romantic love are transcribed here as a rollercoaster of deep sonic states conflicting, merging, resisting, and becoming other together. Ethereal voices and nostalgic arpeggios are battling with tense waves of angry basslines travelling from the guts to the throat. With “Mirall” (Mirror in Catalan), Manel De Aguas offers a vulnerable piece infused with contradictions, all swallowed by the dizziness of change.

Born in the UK and raised between London and Barcelona, Drazzit’s deep dive into djing and production began when dealing with withdrawal from the pandemic weaning of club culture. Faced with no option but to become his own music provider, Drazzit quickly created a surprisingly personal universe blending techno, hardstyle and trance with some pop accents, aiming to transmit the queer energy of euphoric sweaty collective moments.

After a catchy yet emotional trance track for VOL.1, and an appearance on Anetha’s Mama Told Ya latest compilation, Drazzit digs his fast-paced groove even deeper with “Against the Clock” on our VOL.2.

The 155bpm track is a dynamic bundle of tensions built around a heady buzzy melody, hard-hitting yet groovy drums, an electric crackling bassline, swirly percussive elements, winding you up high and low. The twitchy energy build-up takes you on a clock-ticking race, a countdown to dementia. Are you on the edge yet?

AC2 (pronounced “Acidos” in Spanish) is the love child of Catalan Roser and Latvian-Catalan Igors. Their passion for techno has led their frequent encounters in raves to turn into a fusional partnership itself transformed into a bulldozing DJ and production duo. Founders of the secret hotline rave Gomorra, their enthusiasm for the culture and the craft burns bright when performing and is highly contagious.

After their celebratory neo-rave belter “Who Dat” on VOL.1, the duo delivers another scorcher, the apt-titled “Double Trouble”. Playing on their duality, they created a playful track where old-school rave stabs and a frantic acid line chases each other like excited puppies gone berserk on the dancefloor under the crowd’s cheer.

The Buenos Aires-born, Barcelona-based Argentinian has made a name for herself on both sides of the ocean with releases on Polish label The Meaning of Rave, Swiss queer label Harder and Columbian Fluctuat Records with her industrial-infused hard techno. But for her first drop on House of (S)PUNK, she shows, with “Playful” a perkier side of herself. To her signature heavy kick & dirty rumble combo, she brings lighter, fun elements of distorted vocals and cheeky sound design bouncing off each other, joined halfway through by a melody reminiscent of 8-bit and your Sunday afternoons spent playing video games, your fingers sticky with ice cream.

Barcelona-based DJ and producer from Belarus, co-creator of the queer techno party KRAFT, Lola Kay has been throwing after-school parties since she was 11, being a DJ even before she knew making people happy dancing had a name. Since this childhood revelation, she hasn’t stopped creating special moments of community bonding on the dancefloor. After a new wave-infused groovy electro cut for VOL.1, with “Never Ender Party Bender” she continues bottling up multiple influences into one uplifting piece, this time carried by bouncy acid basslines, trancey synth leads and atmospheric pads. The title says it all, it’s about that happy place you create with your chosen family, that makes you wanna go all night, all weekend, for a dancing marathon you wish would never end.