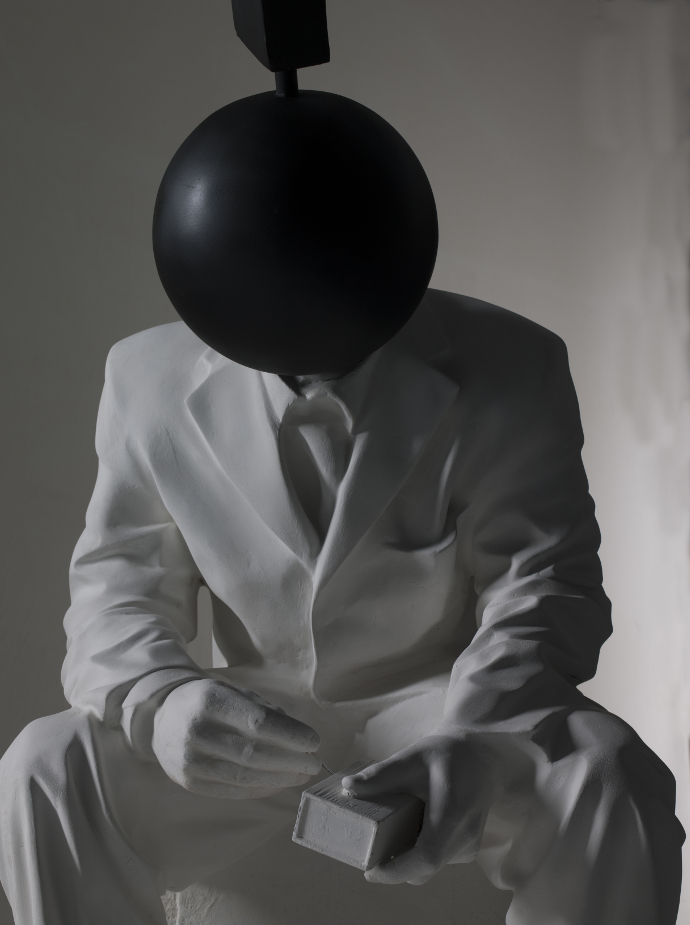 Hugo Farmer – The Strength in the Shadow

Today, I’d like to introduce the work of Hugo Farmer, one of the most english person I’ve ever seen on Skype. Of course, there’s the accent, but also his facial features, the punk attitude found in the pictures of his latest exhibition ‘article 10’, and the mention of the ‘Battle of the Beanfield’. As France and Berlin, England has a long history of anti-establishment activism and the tales are legendary. Unfortunately for us, we’re living more and more in a f*cked up world. And yes, the struggle is real. Hugo Farmer’s practice revolves around this protesting tradition coupled with the general contemporary mind-numbing environment. His iconic megaphone headed characters are a poignant symbol of this as those desperately silent figures shout in a blank void.

As a former head of an art production company, Farmer masters everything technical around his work and focuses on creating a powerful art tool that can convey his wish for the audience to question our society. I was very fortunate to have a little chat while he’s busy preparing exhibitions in Berlin and Greece.

KB: There’s a long tradition of theriocephaly as a representation of a man with a divine attribute, like Horus or the Minotaur. Liu Xue showed us more recently another kind of hybrid with the animal. How did you start developing your sculpture ideas?
Hugo Farmer: I suppose it came from the feeling of needing to express some pent-up aggression that I had at the time, mainly that my puny voice was not being heard amongst the masses, and I wanted my views and opinions to be heard, dammit! Also the need to get people to question things – not just opposing authority but also valuing the fundamental values of humanity. That brought me round to focusing on freedom of expression and speech, how they came about with the forming of the Magna Carta in 1215, which then became the basis for the Universal Declaration of Human Rights after the Second World War.
Replacing the head with a symbol – either the question-mark or megaphone – creates a blatant statement about what the piece stands for. I like it when the concept of a piece is easily understood so it’s accessible to everyone.

KB: You’ve been involved in the activist scene for quite a while, is there a particular form of art that is suitable to convey political ideas?
Hugo Farmer: I would say all art can display some form of political view or non-view but I would say keep it simple and bold. I saw a great one the other day which said “Question everything”, and someone had sprayed next to it “Why?”! Any form of public art is great as loads of people get to look at it. You might have made the most political piece of art which could change the world but if no one sees it what is the point? So I might struggle here as I have never sprayed on the street and I would say at the age of 40-plus with two kids it’s something that I won’t be starting in a hurry.

KB: Living in the Utopian city of Auroville in India for a few years might have been a powerful determining factor in your development. What do you bring from this experiment in your everyday life?
Hugo Farmer: Sure. I have had this conversation before with my step-sister Tiggy who also lived in Auroville with us. I was very young at the time but the Utopian values of the place on paper are great. In reality, I went back to visit the place when I was 19 and found that, as with every organisation and religious sect, in my view, there is hierarchy which in turn breeds discontent. As soon as you make a group, problems appear. So maybe I have been slightly indoctrinated. I have no idea, but in theory anything is possible.

KB: In your works, you’re questioning what happens in our society and our our voices are heard or silenced, yet art as it is right now is very dependent on an economical system that pushes away the poorer. We could even say that only the rich can enter it and influence it. How do you deal with this paradox?
Hugo Farmer: I get your point and it is valid for sure. I have been very lucky. I managed to get on the housing ladder, get a good job etc etc. Some people would say that you make your own luck. Some people would say it’s just hard work, that you get out what you put in to your life. In a fantasy world, if I could make loads of money I would create a place with a bunch of studios and cap the rent on them and ensure that there is space available for creatives to make stuff. I suppose it could be like a Robin Hood kind of situation with the rich buying the art and then the money getting put back into the system.

KB: You have a few exhibitions coming up, what are you mostly looking forward to?
Hugo Farmer: Yes I have three shows in the pipeline this year – one in Greece, one in Berlin, and finally one in New York. But firstly I am involved with Shangri-La this year at Glastonbury Festival which will be fun. The theme this year is truth and lies, so they are taking my new sculpture Yes,NO,Maybe.

KB: What makes you the proudest in your production?
Hugo Farmer: Not really sure how to answer that question. I suppose the finished items themselves. I do also like when I get people asking “How the hell did you make that?!” And if people walk away from one of my pieces feeling like they should question stuff, that’s job done.

KB: Many thanks Hugo!