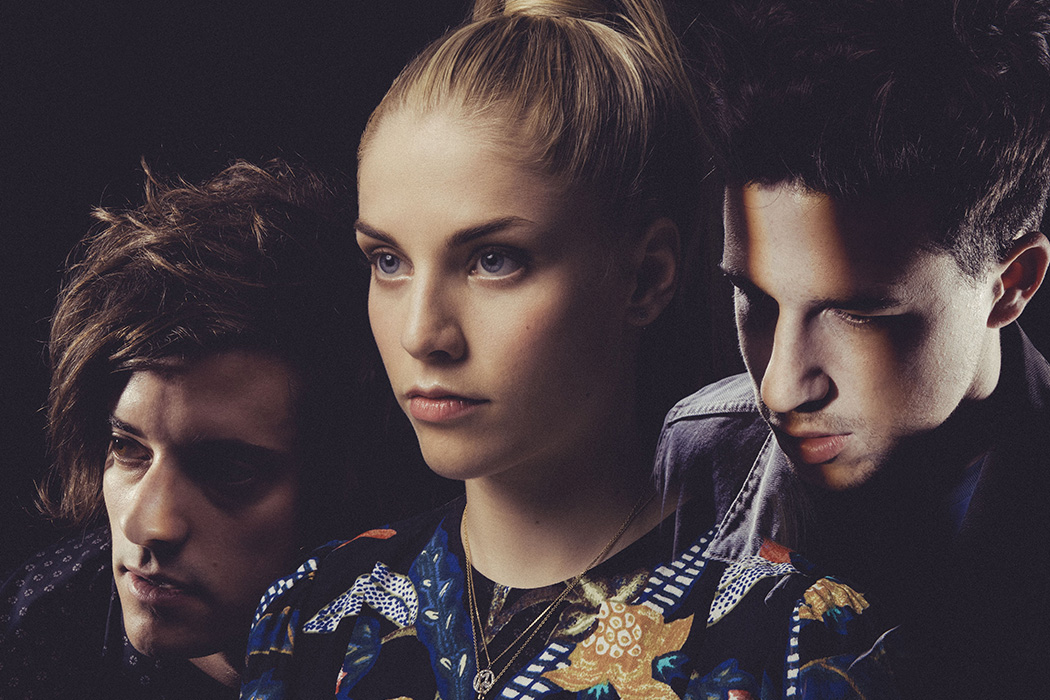 Four years have passed since London Grammar’s debut LP “If You Wait” was released. In the meantime, the band who was deemed “one of the most exciting international breakthrough acts of recent times” went on to prove that such grandiose statements are no laughing matter, by picking up an Ivor Novello award for their hit single “Strong”, playing at the prestigious John Peel Stage at Glastonbury, and performing on hit US Late Night TV shows such as Jimmy Fallon and Letterman. But would we be talking about all of this if there weren’t exciting news in the form of their second LP “Truth Is a Beautiful Thing” having just been released?! Possibly not. That’s right, LG have dropped their second LP, which basically can’t be mentioned without the preface of one simple little word that summates it all… “EPIC”.

Taking on the words of Dan Rothman (and adding some of our own), the best way to describe this album is “expansive” or a “widescreen” experience of the development of the band’s overall sound. Hannah Reid’s deep and soulful voice, likewise, intricately positions questions of gender roles, love, and our own moral compasses in these hard-hitting global times into the song lyrics. Where “truth” or “the question of truth”, is a prevalent ongoing theme throughout the album.

Despite their youthful appearance, London Grammar, are a gifted trio of music makers who have been learning fast with a little help from some of their legendary producer friends. As the story goes, it was 2009 that was the year that vocalist Hannah Reid and guitarist Dan Rothman first met in the hall of residence at the University of Nottingham which they were both attending.  Typical to many a first meeting in the 2000s – Rothman saw a picture of Reid on Facebook with a guitar and sent her a message to see if she wanted to collaborate. A year later they were joined by Dominic ‘Dot’ Major (keyboard, drums) and in 2011 the trio moved to London where they began by playing low-key gigs at local bars. Trudging along the old and beaten path of many musicians before them, what happened next is, of course, the stuff of dreams for many newcomers… They were noticed and signed to a major label, Ministry of Sound and their band management was taken over by Big Life where they then did some early recordings with Rollo Armstrong of Faithless and Liam Howe of Sneaker Pimps. The rest after that you could almost say is history…  Wherein, it is no doubt that the expansive instrumentation and orchestral sounds that are heard on “Truth Is a Beautiful Thing” are impressive, and that the entirety of the album is a haunting reflection akin to those good ol’ times when “art imitates life”.

Today KALTBLUT has the exclusive pleasure of sharing with you the chat that we had with one of the most humble and down-to-earth bands that are shining bright on our tv’s and computer screens.

KALTBLUT: So aside from the apparent “London” part in your band name, as that’s where Hannah and Dan you guys are from, where did the idea of “Grammar” come from?

LD: (Hannah Reid) (laughs) We actually just kind of thought it sounded good… Just, like, how the words sound together and so we picked it! And, also, at the time we didn’t think about a name so much, we were just like, we need a name!

KALTBLUT: Is there a band or album that you can attribute to why you first wanted to become musicians or wanted to start making music?

LG: (Hannah Reid) Yeah… For me it was the Rumours album by “Fleetwood Mac”, I remember listening to it in the car with my dad. Its his favourite band.

(Dot Major) Yeah, it probably is those old records because I mean, it’s like the things that your parents played that make you wanna be a musician. Also, that was just such a great era. The music that they were into in terms of bands was such a huge thing. So, I think it was that thing of wanting to be in a band rather than specifically wanting to be a musician, for me. I remember the bit in ah, “Another Brick In The Wall” by Pink Floyd, you know, the bit where he’s like “how can you have any pudding if you don’t eat yer meat”? I was just listening to that with my dad thinking that it was mental.

KALTBLUT: What are some of the biggest cornerstones that have happened between your debut LP ‘If You Wait’ back in 2013 and now?

LG: (Dan Rothman) Um, I think there are so many different things along the line that happened, especially on the first record. I mean there’s things, like, you know… playing Glastonbury at the John Peel tent. That was definitely a special moment because it was just one of those things where you feel like you come into the limelight a bit more. It was amazing and then other things are like, winning an Ivor Novello, which is also an amazing thing and a totally overwhelming achievement for us and we were really proud about that. So there are lots of little nice things that we mark that we are really proud of, for sure.

KALTBLUT: So on that note, what was it like working with Paul Epworth and Jon Hopkins on the new album?

LG: (Dot Major) Yeah we worked with a few people on this one… We worked with Greg Kurstin too, and we also worked a bit with Tim and Roy again, who did the first album with. But I mean, working with John and Paul and Greg was an amazing opportunity, really. As we got signed having not really released anything, so we never got to work with that many people before. And they’re all just so different… Just a different experience every time working with a producer. So I think that is a really big learning experience for any young band – to work with different people and see how they all work. I think, ultimately, being a producer in any sense, you have to learn to emphasis with the artist. As there is always a bit of push-and-pull between the artist and the producer, but we learnt a lot from all of them.

KALTBLUT: Having said that, is it hard to stand your own ground when you are working a lot with people who are older and more experienced than you?

LG: (Hannah Reid) Yeah, definitely… And that’s quite a hard thing to learn… It can be really painful if you’ve written a song and someone really wants to change it, or wants it to sound a certain way, which means you have to learn how to negotiate those moments without having a tantrum (laughs).

KALTBLUT: So how do you keep yourselves grounded when dealing with the pressure that comes through your popularity, touring lifestyle, and working with such big industry figures? Do you have any specific tactics you can share?

LG: (Hannah Reid) I think for us, like, in terms of the lifestyle when we go home our lives go back to being completely normal. We’re not famous in the sense that we ever get recognised; if things had changed like that maybe it would all be a bit weirder. And I think when you are working with people who are really really successful, if they are nice people you just don’t ever really think about that. Like, with Greg, he is just the nicest man in the world, so you feel so comfortable that you don’t really think about the fact that he was probably working with Katy Perry before or Adele.

KALTBLUT: Yeah that makes a lot of sense… So how would you describe your new album then?

LG: (Dan Rothman) I think we would describe it as being – the word I keep using is – slightly more expansive… Or “wide-screen” and that seems to be sort of imagery based and also influenced by Hannah’s lyrics. And then just trying to bring more live elements to it. From having toured the first record and then going on to make the second record, you try and bring all these elements into the recording process. And then naturally, I think, you have a sort of larger soundscape. In order to try and make the sound right for us; it was the case of making it sound more expansive. So I think that’s probably how I see it…As well as being slightly more colourful and maybe marginally more uplifting at points.

KALTBLUT: What were some of the biggest challenges that you faced whilst touring, and then writing and producing your new album “Truth Is a Beautiful Thing”? And what was the inspiration behind its name?

LG: (Hannah Reid) Well, when we were touring the first album we didn’t really have the time to write anything, it’s like a totally different side of being in a band. So, I think the challenge actually was, sort of, coming home and getting back into being in the studio again. That took some time…

And with what “Truth Is a Beautiful Thing” means… Truth is just one of the themes that runs throughout the whole album… So, that song title seemed appropriate, and it’s obviously the last song on the album for that reason too.

KALTBLUT: There seem to be a few songs on the new album that touch on some political and gender based subjects (“Oh Woman oh Man”, for example, and “Big Picture”). With the election of Trump and Brexit last year and the general “global climate”, have you felt any extra responsibility on your shoulders as musician’s who are in t

LG: (Hannah Reid) Oh, I don’t think that we really feel a responsibility to… I don’t think it’s an artist responsibility to make sure you’re saying something, but I just think that art does hold up a mirror to all life, so that kind of stuff will just be in the music. And I think that is what we have some times found with some of our songs when we look back at the way they sound, or when I look back at some of the lyrics – I can totally see how, oh yeah, that’s funny that does kind of relate to this or that situation.

KALTBLUT: So then as a final question… Since your album is coming out in summer – what are your favourite flavours of ice-cream, and where do you like to hang out on warm summer days?

(Dan Rothman): Yeah, probably chocolate as well (laughs). There’s actually an amazing place is Australia called Messina… It’s insane!! Oh my god, they do the best ice-cream. It’s on Bondi Beach which is basically the best place to be in summer, and which kind of goes hand-in-hand with the amazing ice-cream.