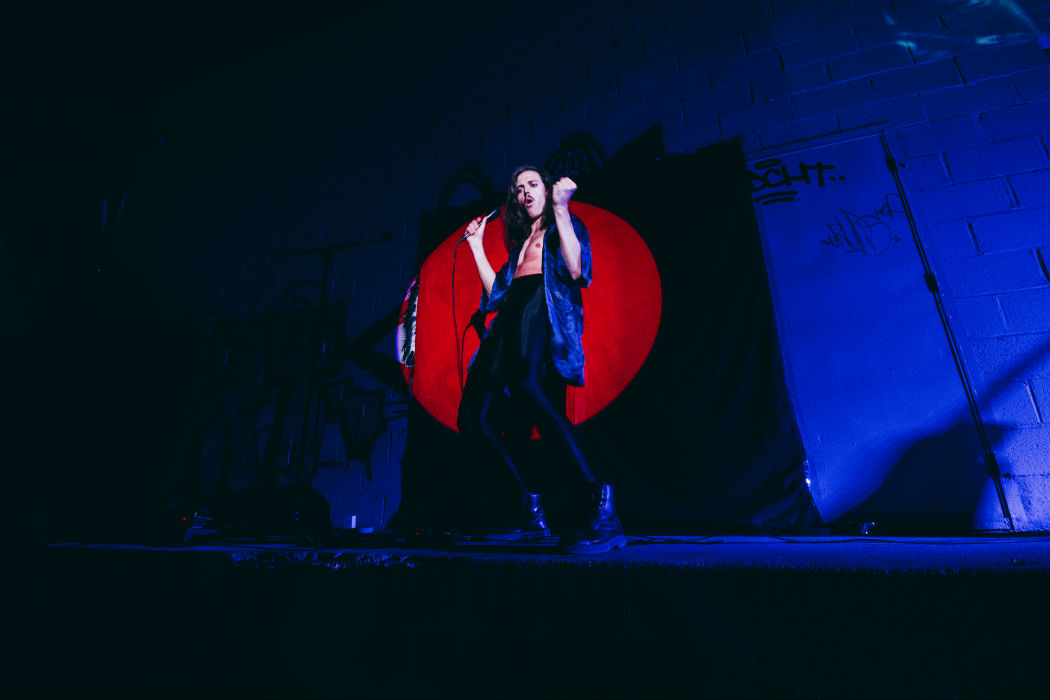 We talked with the Los Angeles-based artist Bonavega, an artist to watch who creates provocative narratives through “retro nostalgia”. His latest release, “Beautiful People” features metallic and neon color palettes, a visibly vulnerable performance and erotic dance moves. Bonavega pulls inspiration the likes of Queen and Talking Heads, though still manages to transform it into his own. Although Bonavega describes his own work as “performance based, theatrical pop music”, we see it as so much more. Read on to uncover specific ways he stays vulnerable and honest within a stereotypically surface-level city, and what you can expect in the near future.

KALTBLUT: Where does the name “Bonavega” come from?
Bonavega: Before I moved to LA and before I was heavily pursuing making my own music and performing, I was a DJ in Ohio… I had to come up with a name for myself and I kept throwing around ideas with friends. I was looking for something that sounded kind of Euro. Eventually I just came up with BONAVEGA. It sounded euro and trashy and I pictured that name in neon and thought it would look cool. So it stuck… since then Bonavega has become a totally new thing. I want Bonavega to be a creative outlet not only for myself but for people watching me on stage. I want them to see and feel a type of freedom and be able to take that freedom home and apply it to themselves in their own lives and their own creative endeavors.

KALTBLUT: What stands out to you in LA? Why do you stay, aside from the fun?
Bonavega: Honestly the weather and the progressive atmosphere. Everyone is doing something to better themselves. Some aren’t making a living with it but they’re enjoying their lives. Everyone you talk to is an actor or a singer or a writer and even though that can get a bad rep and make some people want to steer as far away as they can…for me it’s encouraging and inspiring. I’ve met some incredibly talented people in all the different arts and it’s amazing. Even if it’s something I don’t necessarily like if they like it and are feeling good from it then that kinda makes me like it more. I’ve tried to take that over into music. Sometimes I won’t like a song just because it’s from an artist I historically don’t jive with but my favorite times are when I’m jamming out to a song and then the DJ comes on and and says it’s by the very artist who I never like. Those moments give me chills cuz it shakes my ideology of what I think is “right and wrong” there’s not one way to do life and there’s not good and bad art. It’s personal and we need to learn how to be ok with not understanding something that someone else is totally into.

KALTBLUT: How did you meet Curtis Pickell and Adam Beris?
Bonavega: My friend Thomas Linder, who is an artist and co-curator of the monthly art collective BBQLA, introduced me to them. They all went to the same art school together and then met back up here in LA.

KALTBLUT: Why did you choose to work with them for the video for “Beautiful People”?
Bonavega: We have been good friends for a while now and they’ve always been a supporter of Bonavega. Curtis has been making videos freelance for a long time and Adam is a great painter/visual artist who understands what I’m going for with Bonavega so over time we all decided to collaborate.

KALTBLUT: Can you talk more on the narrative behind “Beautiful People”?
Bonavega: As an artist I constantly have two simultaneous conversations going on in my head. One that’s kinda ballsy and sexy and passionate. Who says “The show must go on!” And who rips off his shirt in front of crowd and shreds on the guitar trying to be the most bad ass person in the room… and then the other one who is much more timid and full of self doubt. Who asks “what does it matter though at the end of the day when we all will die” we are all trying to put on this image of beauty that will fade. So what’s the point. In the music video you kind of see these two thought processes happening. Bonavega going to great lengths to build this perfect on stage image but in the backdrop he’s just a normal dude living a mundane life. As depressing as it can come across I think as a performer it’s necessary to have both polar extremes. That way when you do finally get on stage and have your moment you seize the opportunity and go balls out knowing that in 40 minutes or so you’ll fade back into the crowd and just be a regular guy again.

KALTBLUT: Have certain romantic experiences directly influenced “Beautiful People”?
Bonavega: Not with one person in particular but with my relationship with the crowd. I constantly feel a responsibility to take care of myself physically cuz I know that I’ll be out if front of people parading around and they’re there to see Bonavega in all his glory. I have to give them what they came to see. Even though beauty fades you gotta embrace what you have now and put it out there.

KALTBLUT: You described your life as “gritty” – is that specific to your era in LA?
Bonavega: I think gritty just refers to the grind. Trying to stand out in the music scene in LA is a constant struggle mixed with small moments of light that keep pushing you along. As hard as the journey is I’m having some of the most fun I’ve ever had and I finally feel like I’m doing what I’m supposed to be doing.

KALTBLUT: What makes you feel vulnerable?
Bonavega: Women. In good and bad ways… I think it’s good to be vulnerable and open with someone you are intimate with… I think it brings you closer and bonds you really tight. The problem is though when it all goes to shit you can easily live in denial and justification because your trying to protect that vulnerability you shared with that person. You no longer look at the situation in reality… it’s like your looking through this “love” filter and it’s a really foggy filter. In the words of Otto Harbach “When a lovely flame dies, smoke gets in your eyes” im trying to work on this. Be vulnerable, give yourself to someone, but then don’t worry about what they do with it. You can’t hold on too tightly to these types of things anyways because life is so fragile. Hearts can turn on a dime and you never know what your going to feel a year from now so just live in the moment and be a positive, loving person to whoever you are with today.

KALTBLUT: How do you look past “the smoke”?
Bonavega: Friends. You gotta talk to people you trust and tell them all the dirty details and don’t be afraid of what they tell you.

KALTBLUT: Do you feel that same intimacy/vulnerability with people you’re collaborating with creatively?
Bonavega: For sure. The best way to create is to be in an environment where you can throw out ideas and not be afraid of being laughed out of the room. Or better yet… laugh at the bad ideas and just not give a shit. My music partner Michael McGeHee, who is a phenomenal singer song writer, is a great example of someone I share everything with and it really comes out when we write together. Not that everything we come up with is gold but whenever we leave a session we always feel really good and accomplished. Almost like some sort of therapy session where you got all your ideas out and the other person acknowledges you and REALLY makes you feel heard.

KALTBLUT: Tell us about your favorite show to date?
Bonavega: Honestly. The one featured in the “Beautiful People” music vid. It was at BBQLA and it was packed to the gills with cool open minded people who I could immediately feel understood what I was trying to say. There’s nothing better then that.

KALTBLUT: Next music projects/creative projects you’re working on as “Bonavega”?
Bonavega: Right now I’m trying to harness my live show and really sharpen it. I usually have a projection that goes with it so I’m trying to make it as visually stunning as I can as well as musically. I wanna do a small SoCal tour. I also just moved to a different part of the city so I’m interested to see what kind of music comes from that. I want to put out another EP soon. I’m always thinking of music video ideas too and then sometimes will write a song to fit the concept of the video. It really depends. I also am starting to fall back in love with playing the guitar. Like REALLY playing the guitar. Practicing all the time and just trying to dive in deep to it. Harnessing the “Art of Shred”… so I’m interested to see how that manifests itself onto the stage… we’ll see.