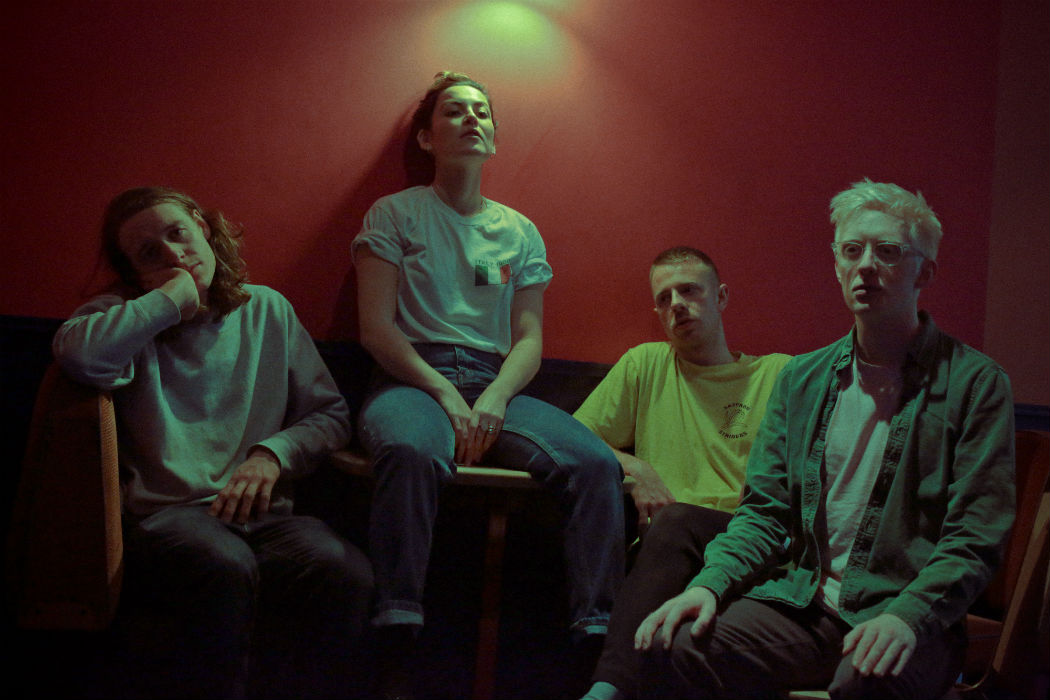 Fresh faced and bushy tailed, Childcare are here to get you bopping all the way to work and back with their catchy new single “Kiss?”. Kiss (question mark) comes as a follow-up to their single ‘Film Club’, which caught the attention of Huw Stephens’ BBC Radio 1 show, Radio X and Virgin Radio UK. Layered in vocal loops and indie band riffs that will make your heart start to pang for circa 2000, in a way you didn’t know it could. Childcare introduces us to their witty, tongue-in-cheek lyrics and best of British self-deprecating humour, in a truly mesmerising concoction that has been generating “the ones to watch” buzz. The idea behind “Kiss?” came about whilst Ed Cares, frontman of Childcare (and male nanny) was “… waiting at the school gates to pick up the child I look after, I went to say hi to a couple of the mums I knew in the playground. I went to kiss one on the cheek just as she leant forward to pick something up from her bag on the ground. This left me hovering mid-air above her for a few seconds, at which point instead of returning to my natural standing position, I decided to draw her attention to my predicament by posing the question: ‘Kiss?’ She rose, we greeted, I blushed.” KALTBLUT has an exclusive interview with Ed Cares, Emma Topolski (bass), Rich Legate (guitar) and Glyn Daniels (drums) of Childcare – on their single, their influences, and some of the weirdest jobs they’ve ever had…

KALTBLUT: Hi guys, firstly, tell us a little about about how you all met?
Childcare: Well Emma I met at a party. We agreed to play table tennis a few days later and she mentioned she was having her tonsils out and that she couldn’t sing for 6 weeks. So I suggested she learn bass for the band I was just starting. Rich I knew through some other bands and I always thought he looked great on stage, skipping round the stage like a blonde Mike Tyson. Glyn I met on a mini golf course, we both got a hole in one and started talking.

KALTBLUT: There’s a wonderful backstory to your single ‘Kiss?’, could you share it with us?
Childcare: I was picking the girl I look after up from school and went to greet a couple of the Mums I knew. I kissed one on the cheek, no problem, cool as you like, then turned to say hi to the other. Just as I leant in she reached down to get something from her bag so I was left hovering over her, lips pursed, mid air. After an excruciating few seconds I meekly said ‘Kiss?’ and she raised to kiss me.

KALTBLUT: You songs seem to be quite lyrically based. Where does the inspiration behind the lyrics usually come from? Is it in fact, fiction, or feeling… Or a bit of everything?
Childcare: Bit of everything yeah. When I started writing songs I didn’t really know how to put what I was feeling down so I made up stories, often crime based (think a Touch of Frost). But as I’ve got better at writing I’ve worked out ways to say things that are going on in my head and I notice around me. It’s so very hard to do it in a subtle or interesting way, but that’s what I’m striving for.

KALTBLUT: Take us through a typical beginning to end process of how you guys write and record your songs.
Childcare: Usually I’ll bash away on something for a week or two, we’ll jam over it together, then realise it’s shit. We’ll do that a few times and eventually something won’t be shit and we have a new song and it’s very exciting.

KALTBLUT: On ‘Kiss?’ you play around a lot with vocal loops, creating a really fresh band signature feeling. How would you describe your music to listeners?
Childcare: Aliyah meets NOFX.

KALTBLUT: What have been some of your biggest musical influences to date?
Childcare: Spice Girls, Toni Braxton, Haydn.

KALTBLUT: How is life on the road as a touring band?
Childcare: Tour lyf, where to start. Well we’ve done a lot of this so I can tell you it’s exhausting. Once, on the only tour we’ve ever done, we did 5 dates in two weeks!!! Can you believe it. Every two and half days a new town, I didn’t know my arse from my elbow by the end of it.

KALTBLUT: When can we expect the album?
Childcare: Oh lord, that’s way off.

KALTBLUT: What was one of your favorite shows that you’ve played?
Childcare: I really enjoyed playing Scala with my last band To Kill a King.

KALTBLUT: What are some of the weirdest jobs that you’ve ever done?
Childcare: I once worked in an office doing some temping and once I was a gardener.