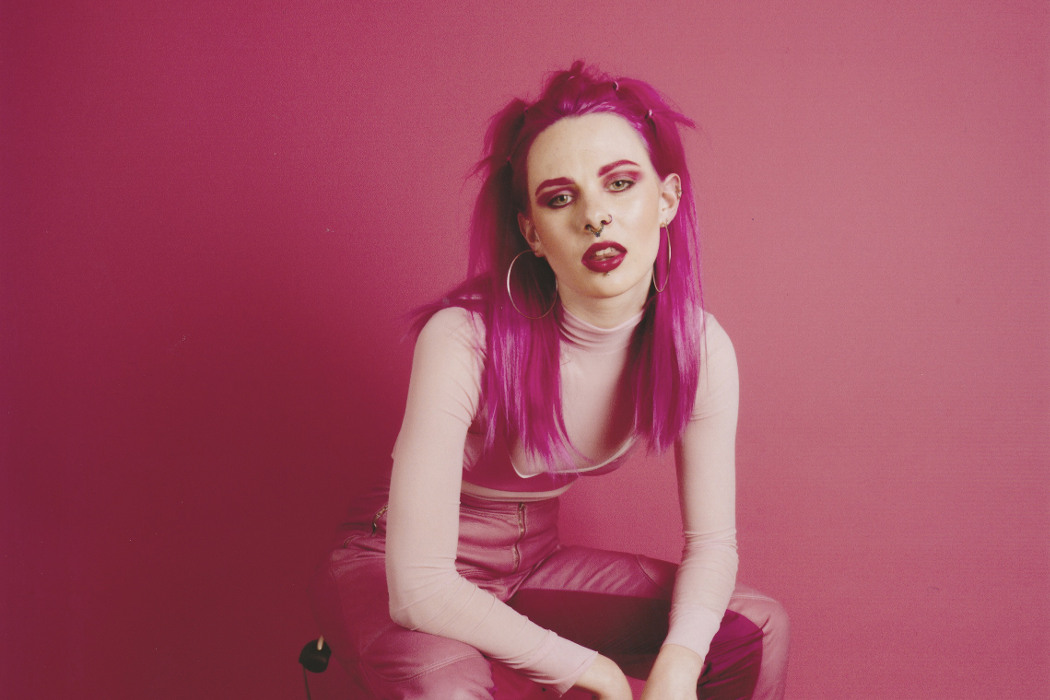 Meet GIRLI. A beautiful, futuristic punk from another planet, with an acid rap/pop sound that’s absolute dynamite, Milly Toomey, a.k.a GIRLI,  represents girlhood, womanhood, and what it means to be powerful, funny, and feminine – while sticking two fingers up at those that call her ‘cute’. With a string of releases that have gathered her a cult following, including her latest storming track ‘Girls Get Angry Too’, and her name splashed across festival line ups all summer, Girli is the real deal, born and bred in London, and going from open mics to headlining before the age of 20. And don’t let her fun, tongue-in-cheek, attitude fool you – she’s quickly building a reputation for being unafraid to speak her mind on issues that most budding pop princesses would shy away from. KALTBLUT sat down with GIRLI to find out what was really behind the neon pink hair and bold lyrics, to find an honest, funny, and captivating young artist who has her sights set on a whole lot more than pop star status – and doesn’t give a fuck what you think of her.

KALTBLUT: How did GIRLI come into being?
GIRLI: Well I started playing acoustic guitar and doing open mic when I was 15. And then I went on joinmyband.com, and found these two other girls – and we started this band and just played loads of sleazy pub gigs in Camden. Then they went off to university, and I was sort of abandoned! I was just on my own, and started playing loads of open mics by myself, and working with people who played electronic music and started getting into that – and then GIRLI was born!

KALTBLUT: Do you now feel that being forced to find your own way is a good thing, even though it seems really daunting at the time?
GIRLI:Yeah! I always thought I would be in a band, just because I played guitar, and I sang, but I didn’t really know how to make songs on my own. I think I also wanted companionship as well – it’s pretty scary doing it on your own. But it actually turned out that I much prefer doing it on my own, because it means that you have a lot more say on what you want your stuff to sound like. Whereas if you you have other people it makes it so difficult to do exactly what you want. Which is why so many people in bands end up doing side projects. So I was like “You know what – fuck it.”

KALTBLUT: How do you feel like your London upbringing has had an influence on your music?
GIRLI: I think London’s influenced me in so many ways. I think it didn’t really used to until I was about 16, and then I got a fake ID and started going to clubs! And I met loads of amazing people at gigs, who then introduced me to a whole other side of London. I started going to grime gigs, and going to drum and bass, and jungle, and reggae nights, and saw this whole other side of London musically. I also think London is so alive, and there’s so many different people – it’s such a diverse place to live and exist, I just get influenced. I write lyrics all the time, and I write them about people I see, on London transport, and on nights out – and my friends. I think my friends are the biggest influence on what I write about, and I couldn’t have met them without having lived in London. So I wouldn’t change growing up in London for anything.

KALBLUT: Where did you find your early musical influences, and which of them do you feel have defined and shaped you as an artist up to this point?
GIRLI: Well my parents were sort of 70s kids – they used to play a lot of Bowie, and Blondie, and Sex Pistols, just in the house. But my dad was super into finding new music, so it was kind of a weird situation where I was like 7 or 8 years old, but I was listening to music teenagers were listening to at the time. My dad was super into the Arctic Monkeys, Lily Allen, and Scissor Sisters – really random ones you would associate with teenagers. And growing up listening to Lily Allen, I feel like that influenced me massively. They were such great songs, and such great delivery, and lyrics, and they were funny – and it was really cool to have a female role model like that, who sang about …what’s that song that she has? It was like “It’s sad but it’s true how society says her life is already over”. It was really cool to have that kind of role model ingrained in me.

KALTBLUT: Your lyrics definitely express your feelings about rising up as a young female artist, being outspoken and honest about your own experience – can you tell us some of the inspiration for “Girls Get Angry Too”?
GIRLI: “Girls Get Angry Too”! Well I was talking to someone, and they were like – “Girls don’t really get angry. They just get a little bit annoyed. Guys get super angry, they punch shit, and get aggressive.” And I was like “This is the biggest bullshit I’ve ever heard in my life!” So I was like “Fuck it”, and got my phone out and I wrote ‘Girls Get Angry Too’, and then just started writing all these lyrics. I kept adding to the lyrics, and then later on I wrote the whole song. Only in the last six months have I started experiencing how much belittling there is, if you’re a woman in the music industry, or the creative industries – I mean any industry really. Just the most stupid things – you get laughed at or spoken down to because you’re a woman. I rap in my songs, and whenever I say to someone I do music, they immediately assume I’m a singer. I sing in my songs, but I’m not a singer. They immediately assume that I don’t write my own songs, which I do!And they don’t even think about the possibly that I could rap in my songs. So when I say “I’m a rapper, I write my own songs, I like producing as well” – the shock on some people’s faces is just hilarious. Some people actually don’t believe me, some people laugh when I say I rap, like “Oh my God, that’s cute!’ If I was a guy they wouldn’t say “That’s cute!” So I just wanted to make this song. I also feel when I write songs I actually want them to say something. Even if it is a love song, I think it should still have a message. Because if you have a chance to say something in what you’re making…then I think you should rinse that!

KALTBLUT: So do you find your music gives you a music and platform on what you want to express?
GIRLI: I think so, definitely. The fact that there are people who just wanna hear the stuff that I write, means that I should put relevant and worthwhile things into it really. I think if you’re an artist and you have a platform, I feel like you have a social responsibility to actually use that to say something. Because there are so many people who just go through whole careers, and don’t do that. I feel like if you have any level of fame or recognition you have to use that. Which is why it really, really pisses me off when you see people as famous as the Kardashians, who do fuck all with that fame? Because it’s like – you know – use it! I feel like that’s a social responsibility.

KALTBLUT: How does performing live inspire you, and how are your shows a little bit different from your records, and what’s in your videos?
GIRLI: Well performing was the thing I did first, before I even wrote any music. I went out and I started doing covers, and then I went out with an iPod, and I would play a backing track of someone’s song and just sing on top of it. Because I just love getting on stage, and fucking writhing around. My shows are a chance for people to see a completely different side to me. I feel like shows, and just going to see music live, should do something completely different to how it sounds on the record. So when people come to my shows I want them to feel like they’re a kid again, and it’s like a playground. I don’t like stages, I feel like stages limit people, so I always just get off the stage, and jump around, and throw things out to the crowd, and involve people. My shows are super super fun.

KALTBLUT: So you’ve got an exciting London headline show planned this summer –  what else have you got in the works for us?
GIRLI: There’s just a lot more music plans really! We were gonna do an EP, but we decided instead just to do loads of singles. I was like “Fuck the EP! Singles!” Because I’ve got so much music, and I really want people to hear it. So lots more of that. I’m playing quite a few festivals, Bestival, stuff like that. So it’s all gonna be cool – hotting up!

The single “Breaking My Phone” by Oscar featuring GIRLI is out now via Wichita Recordings. Buy it here.