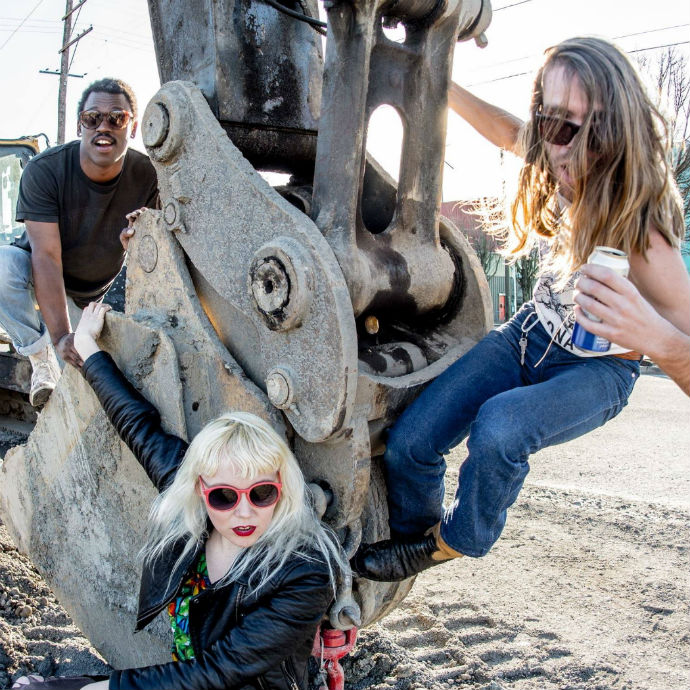 KALTBLUT had a frank chat with Chris Scott (drums) and Chevelle Wiseman (bass) of the surf trio, Guantanamo Baywatch. Their newest release, Desert Center, gets its title from a desolate town in California that mainly serves as a pit stop for gas and other basic or not-so-basic needs. The town has become a source of inspiration for guitarist/vocalist Jason Powell, who recently relocated from Oregon to Arizona. The trio are often on the move, and it seems as though that is a significant motivating factor for how the band is doing so well. Their live shows are better than half of the house parties you’ve been to. The consistent energy the musicians put out leave a lasting remark in whatever space of the brain you store that memory.

We dug into more of what the band experiences while on tour and asked about the inspiration behind Desert Center, which came out August 4, 2017 on Suicide Squeeze records.

KALTBLUT: Aside from the Desert Center along the I-10, what other unconventional yet inspiring spots have you found through traveling and playing music?
Chris Scott: We played a show in Bali earlier this year and our driver Uncle Gusti would pick us up in the morning and take us for a drive around the island. He took us to a forest that had wild monkeys running all over the place and one of them slapped Jason in the leg and ran off. We wanted coffee so Uncle Gusti told us he knew a sweet spot for coffee where they have cats eat coffee bean then poop them out then they roast the beans to make coffee. They called it a Cat-poo-ccino.

KALTBLUT: Was the “Cat-poo-ccino” the strangest thing you’ve consumed on tour? I’ve got a feeling it’s not, and I wanna know more.
Chevelle Wiseman: Last time we were in Mexico Jason ate quite a few eyeball tacos.

KALTBLUT: Who is losing their mind in the untitled tracks off of Desert Center?
Wiseman: That’s Rikky from White Fang and The Memories!

KALTBLUT: If you could work with any visual artist, alive or dead, to collaborate on a music video for a song off of the new album, who would it be, what’s the concept and for which song?
Scott: Gary Panter from Pee Wee’s playhouse for the song Scavenger off our new album!

KALTBLUT: What kind of set do you think Gary Panter would design for “the Scavenger”?
Wiseman: Definitely a wacky caveman/Flintstones type of thing.

KALTBLUT: What about inspiring interactions between strangers or friends you’ve met along the way?
Scott: We met a guy in Switzerland named Midnight Walker. He had dreadlocks and wore a black trench coat and a cowboy hat. He was easily the oldest dude at the show and had all the ladies crowding over him and taking photos with him.

KALTBLUT: One (or two) things you always keep on you when you tour/travel?
Wiseman: I keep a lucky kangaroo bone that I found in the outback in my guitar case at all times.

KALTBLUT: Describe what happened in your most recent favourite live performance.
Scott: We played this hot rod festival in Australia and they had a giant Easter island sculpture that shot flames from its head. It was super wet outside and everyone was covered head to toe in mud. We slept there overnight and woke up to a surf band playing live on the back of a huge truck while people were drag racing in the background.

KALTBLUT: Did you ever meet John Waters?
Scott: Yea we did! Met him in Oakland right after our show. He had his personal assistant come and escort us off the stage and into backstage to meet Mr. Waters. He told us stories about autographing bloody tampons and about the time he received the pizza box that we left on his door step in Baltimore full of our records and tapes and goodies

Happy 60th birthday to Madonna, the Queen of POP

KALTBLUT: You just shot a new music video at Saguaro lake in Arizona. Was that a spontaneous thing? How did that come about?
Wiseman: Jason used to live in a town pretty close to there so he knew the area and how unique looking the landscape is. Everything out there is also cheap as fuck!

Desert Center is out August 4, 2017 on Suicide Squeeze records