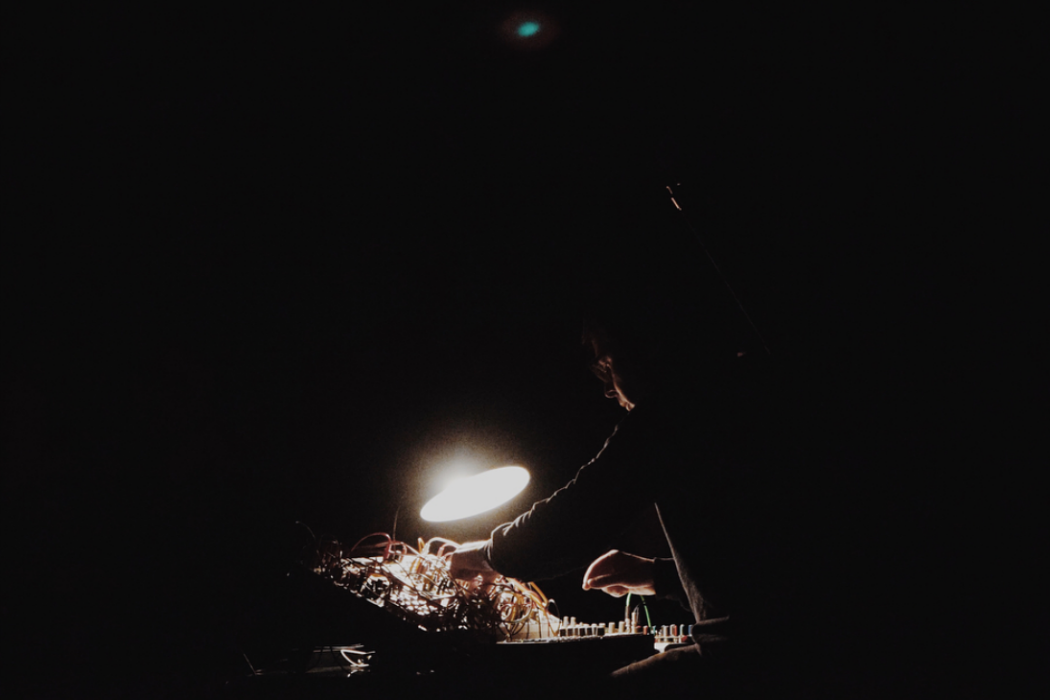 We recently caught German electronic musician and founder of the record label Faitiche – Jan Jelinek at the Funkhaus in Berlin, Germany. Jelinek’s music is often categorized under minimal techno, glitch or microhouse. I discovered his work through a friend, who insisted on playing Loop Finding Jazz Records, nonstop and all day. I found myself craving to listen to the way he perceives sound should be. Even through Jelinek’s live performance in a space as demanding as the Funkhaus can be, Jelinek brought a particular kind of intimacy through his focus over his table of tools. Audience members sat perfectly still and allowed themselves to be swallowed by his noise. Jelinek brought on a sound and visual experience unlike what I had ever lived through before, so it was inevitable that we had a conversation about it. Read below to find out more.

KALTBLUT: I really enjoyed your performance at Funkhaus last night and I’m intrigued about how you prepare and personally experience your own sets. What does that look like?

Jan Jelinek: Thank you! I’m not preparing my solo set in particular. There is a pool of rudimentarily prepared loops – usually around 15 – in my sequencer. While I’m performing I choose which loop I going to play next.
Usually, I perform around 4 loops – so every loop takes about to 10-15 minutes .. Interestingly enough this time frame has been somehow internalized and it always takes an enormous effort to break it. But it also includes a positive side effect: It helps enormously to build up and plan a running order in advance while performing. Last Monday wasn’t really a standard situation because I played as a support for Kaitlyn Aurelia Smith. So I expected that the majority of the audience never heard of my work and perhaps even doesn’t listen to this sort of music. That’s why the set – by my standards – felt sort of diverse: from cut-up collaging in the beginning to square wave drones at the end. I felt that heterogeneity could be perhaps more appropriate in this context. How I experience my sets? I think it always feels like a very fragile system, which can be influenced by many little parameters, in positive and negative terms. In an ideal situation I totally forget how fragile this system is – or maybe it’s the opposite: I an ideal situation the system isn’t fragile anymore. At Funkhaus I felt somehow pretty safe …

KALTBLUT: When you say that the system at the Funkhaus felt “safe”, what do you mean by this?

Jelinek: Sometimes little events – in form of tiny technical problems, audience ‚reactions‘, room acoustic, light, etc. – can cause an uncertainty, even if these events a literally very little and not perceived by the majority of the attendees. The effect is a certain form of personal disquiet which I, unfortunately, transfer into my performance as well. In a worst-case scenario, the whole is pillared (can I say that?) by this disquiet, even though caused by such a minor matter. But maybe I’m starting to dramatize now…

KALTBLUT: From your interview with Resident Advisor, it seems like you were heavily influenced by your environment during your residency in Los Angeles. Recently, have you found a similar inspiration from a location with newer work?

Jelinek: Well, I was influenced by Los Angeles because the artist residency requires a project which is related somehow to the city. Los Angeles is an extremely interesting place so it felt relatively easy to develop a project on site. But yes, maybe you are right: In the past, I was rather influenced by phenomena with no local nature. This changed in the last ten years – perhaps after I started to focus more on field recordings. Right now I’m working on a new series of 7“ releases which is titled ‘Acoustic Surveillance Series‘. Each 7“ will represent a historical system for acoustic surveillance. The first one is already released and features recordings of a special floor in Japanese temples. Again I came up with the idea during a residency in Kyoto back in 2014. The next 7“ is already in work, this time about a special cave in Syracuse, Sicily. So this series is definitively influenced by the environment. Nevertheless, I still have a lot of projects which rather no local nature, like artist collaborations.

KALTBLUT: I’d love to hear more about the Acoustic Surveillance Series. Which historical systems for acoustic surveillance stood out enough to you to feature in these 7″ and why (in addition to the Japanese temples and cave in Sicily)?

Jelinek: In fact, there is more or less no literature on this topic. So it is very hard to search and find out more. I prefer systems, which are bound to a local peculiarity. The ’nightingale floor’ at the Nanzen-ji temple sounds definitively different than other temple floors. The cave in Syracuse – called Orecchio di Dionisio – has an extreme and unique acoustic. The myth says that the tyrant Dionisio used the cave as a prison so that he was able to eavesdrop their conversations. Other surveillance systems mostly are not bound to a certain spot. That’s why I’m actually desperately searching for new places – so, dear reader, please contact me if you know about such places!

KALTBLUT: What does the future look like for your label Faitiche?

Jelinek: Hard to believe but 2018 comes the 10th anniversary of Faitiche. In the last ten years, the label was rather a platform for my own work and collaborations. I always felt too disorganized for releasing other artist’s work.
That changed with Andrew Pekler’s ‘Tristes Tropiques‘ in 2016. He was a long time collaborator anyway so I thought I give it a try. So the future brings a rather opened label policy and will release also other artist’s work. I’m already in conversation with some artist, but nothing is 100% confirmed yet. Besides that, I’m planning to re-release a collaboration album with the Japanese collective Computer Soup. It was released back in 2003 and included improvisations which we recorded in 2001 in Tokyo.

KALTBLUT: How did you meet Computer Soup? What’s the most satisfying part of this collaboration album?

Jelinek: They were supporting one of my concerts back in 2001 in Tokyo. The album is a nice document about a one-day-recording-session. It’s drawn by the character of improvised music: there are moments where the listeners can witness an artistic joint and naturally there are moments of discord as well. I like the balance of those conditions – even though you have to hazard yourself to stressful moments as well. Maybe such moments make the harmonical parts even nicer?

KALTBLUT: Which artists are you currently collaborating with?

Jelinek: I just came back from a tour in Japan where I was recordings with the Japanese drone artist ASUNA.

KALTBLUT: Can you talk about where your focus is currently going with your music?

Jelinek: Perhaps this is my major problem: Too many projects and too many ideas which interfere a major focus. I always find it more attractive to develop ideas instead of realizing them. Once the idea is manifested, I feel pretty often that there is no need the materialize it. But nevertheless, I just finished a new album – based on radio piece which I have written for German radio SWR this year. Album and radio piece is called ‘Zwischen‘ (Between). It gathers twelve sound poetry collages using interview answers by public figures, like Yoko Ono, John Cage, Lady Gaga etc. Each collage consists of the moments between the spoken words: pauses for breath and hesitations in which the interviewees utter non-semantic sound particles. So this album will rather be sound experiment than music, I guess.