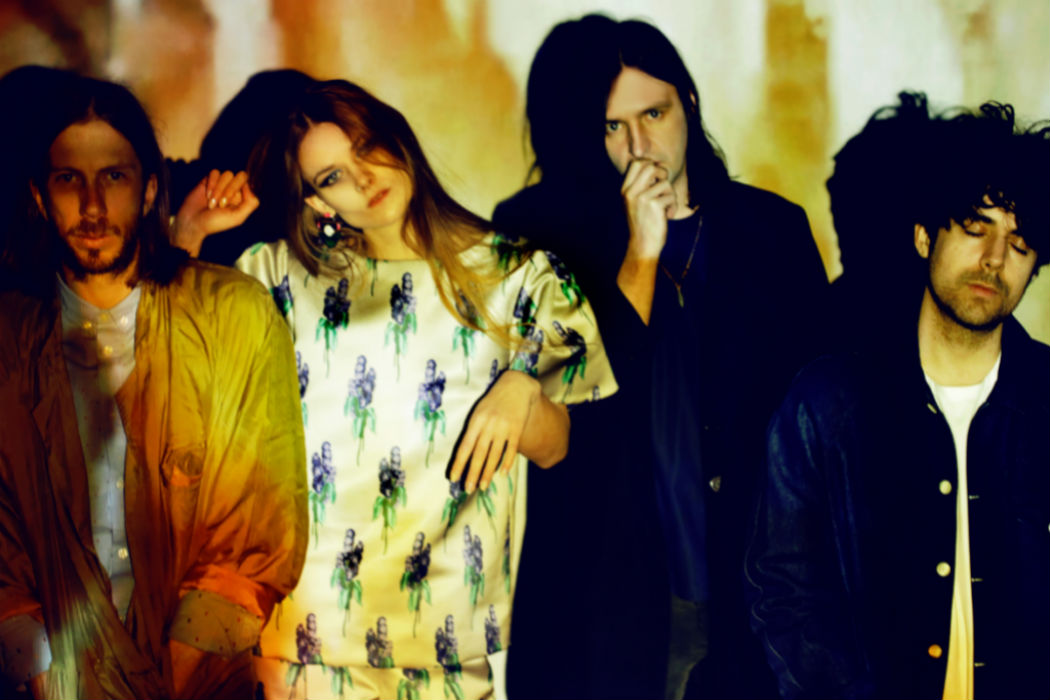 Is Tropical Get a Little Fruity on their European Tour

#Interview! London-based four piece Is Tropical caught our eye with their CG infused and sexually frustrated video for the track “Dancing Anymore,” a few years back. But they weren’t always the indie-electro group you know and love today. They made their move from the humble beginnings of a DIY art collective, putting on exhibitions and events from their South London squat. As parties continued into the early hours of the morning they started dabbling a little further with their infectious sound. Although a little ad-lib to start off, Is Tropical found their direction and continue to create some seriously contagious tunes. With the release of their latest LP, Black Anything, earlier this year they set out to take us on an aural journey with a mix of synth-pop and experimental sounds – proving for a sleeker set of tracks this time around. Not forcing a release date on their latest album allowed them to let their creativity work its magic. And we’re pretty pleased with the outcome. As the fruity foursome touched down in Berlin amidst their European tour, we thought what better time to catch up for a quick chat before they hit the stage for another high-energy show.


KALTBLUT: You weren’t always making music as Is Tropical… How did it all start?
Is Tropical: We were living in a squat in South London in the late ‘00s and then we put on art exhibitions in a four storey Georgian mansion. Other people had been squatting in it for a while and the walls had been painted yellow and bright green. We just stripped it all out, threw all the rubbish out, started painting everything white, and getting international artists to exhibit there. We got a little bit of recognition from the newspapers as they started coming down and giving us coverage. Charles Saatchi came down and started buying some of the artwork off people. With alcohol sponsorships we would just throw parties after the event. Sometimes it would get to two or three in the morning and we’d have some instruments lying around and we’d just start playing punk shows late at night. After a while we decided to start making music properly. Actually doing something that was planned, as opposed to impromptu stuff that sounded terrible.

KALTBLUT: I guess it started more as a collective…
Is Tropical: Yeah, it was just a bit of fun really. We didn’t start with the intention that this is a band, this is what we’re going to do. It just kind of evolved into what it is now.

KALTBLUT: What would you say has been the most stand out gig so far?
Is Tropical: Mongolia was pretty fun because no one had really played in Mongolia because of the licensing laws. Labels wouldn’t send their bands there because they weren’t making money out of it. But, we just wanted to travel to different places as long as they paid for the flights. But, I think when you go somewhere completely different and play somewhere that isn’t on a normal tour schedule it can be the most fun.

KALTBLUT: What was the crowd like in Mongolia?
Is Tropical: Really good! We asked the promoter do you know how many people are going to turn up? He said no, this has never been done before. We were worried because it was quite a big room. But, because of the spectacle of an English band playing that nobody knows we kept the ticket prices down, and so people showed up. Sometimes bands book shows there but they’re like the Backstreet Boys, Pitbull and Nicole Scherzinger – massive acts. Everytime they’re scheduled to play there will always be a cancellation because no one ever goes there, so the fans always get really disappointed. I don’t think for them it mattered who went, as long as someone played.

KALTBLUT: Can you tell me a bit about your latest album Black Anything… How has your music evolved since you first started and what was the musical process behind it?
Is Tropical: For the other albums we’ve written a lot of songs on the road and then gone back to London and had a blocked out period of time with a month or two to record the album. We always found it slightly restrictive because we would be writing the songs in quite a natural way and then you get back and there’s a restricted time limit. These labels would be saying we need these songs finished by this date. With Black Anything it was kind of just more of an ongoing process that just developed over time. We would be away and then we’d start recording stuff with field recorders and then set up little makeshift studios in places. Eventually, we just travelled to five different continents and recorded in these makeshift studios that we put together ourselves. We did loads of field recordings and just assembled the whole thing. It was an ongoing project and it has turned out to be the best thing that we’ve ever done. I think that creative freedom is the best thing that anyone can give themselves, actually no restrictions when you are setting out to make something. If you give yourself imaginary barriers then you sometimes make quite diluted music. We were open to anything really.

KALTBLUT: How long did it take to put together?
Is Tropical: Well, in the press release it says two years, but weirdly that’s because it was such a disjointed process. It didn’t take two years of sitting down on the floor and crying, so to speak. We didn’t force any time limits, we were just like whenever it’s done. It was a nicer way to do it.

KALTBLUT: And what does a typical show tend to involve for Is Tropical?
Is Tropical: Broken equipment, but not in a rock ‘n’ roll way just in an “actually our equipment is fucked” way. Usually just as much energy as we can have on stage. It sounds kind of cheesy, but it’s true.

KALTBLUT: What would you say your vice is while you’re on tour?
Is Tropical: Everything! Local cuisine. For Berlin it’s normally that burger thing under the bridge – Burgermeister.

KALTBLUT: What do you get up to when you’re not making music?
Is Tropical: Well, before we started the band we were making art work so we’ve been making art work for other people’s albums. We just did the Mystery Jets new record and made some music videos for people.

KALTBLUT: So, do you work on all your own videos yourself?
Is Tropical: Quite a lot of the new ones. We also work with a lot of our other friends.

KALTBLUT: What’s your favourite thing to do while you’re in Berlin besides eating?
Is Tropical: We can never get in anywhere. You know all the big clubs – we can never get in. Last time Kirstie tried to show her boobs as entry and they weren’t impressed, so they turned her away. That was at Renate, but we were already inside so we were alright (laughs). We had a very large argument and Gary said not to show her breasts as entry ever again. You can’t do that, it doesn’t work here! Last time we were here we went to Cocktail D’Amore, and that was amazing. From Saturday until Monday. That place is fucking insane. Our old next door neighbour, this guy called Francesco went in December 29th and came out on January 6th. He just went in and lost his shit, I asked if it was good and he said “I have no idea” – Italians are the best at all-nighters.

KALTBLUT: What is it about London that keeps you inspired to keep making music and your art?
Is Tropical: Every night of the week there is something good going on. You can go to gallery openings or little events and on weekdays. On a Tuesday or Wednesday night where a lot of other cities around normally shut down there is always something on in London, which is cool. I guess what keeps us in London also is not being able to speak another language. We had grand elaborate plans of all moving away together. First it was France, then it was Italy. We went and fucking looked everywhere. We thought we could just set up in a house, but then it didn’t really happen. It’s easier being in London because if we moved to somewhere like Antwerp, Brussels or the countryside we would kind of be fucked for other work. Si was making the point about having no Wi-Fi or milk. Milk and Wi-Fi were his two things – he was saying “the nearest shop is about a kilometre away how are we ever going to get milk?” We might have had a cow.

KALTBLUT: What have you got coming up for 2016?
Is Tropical: Loads of festivals actually. We’ve just got ones for Istanbul, the Ukraine, loads in Italy and Spain. But playing in new places, because we’ve played in Turkey once before and we’ve never been to the Ukraine. We’ve been booked a few times but there were visa issues and stuff. They were like we will give you a one way ticket and cash in U.S dollars and we we said that’s not happening. We need a return ticket for one thing. Actually a box of cash would have been quite good. Why did we say no to that? And touring the album…

Black Anything is out now on Axis Mundi Records