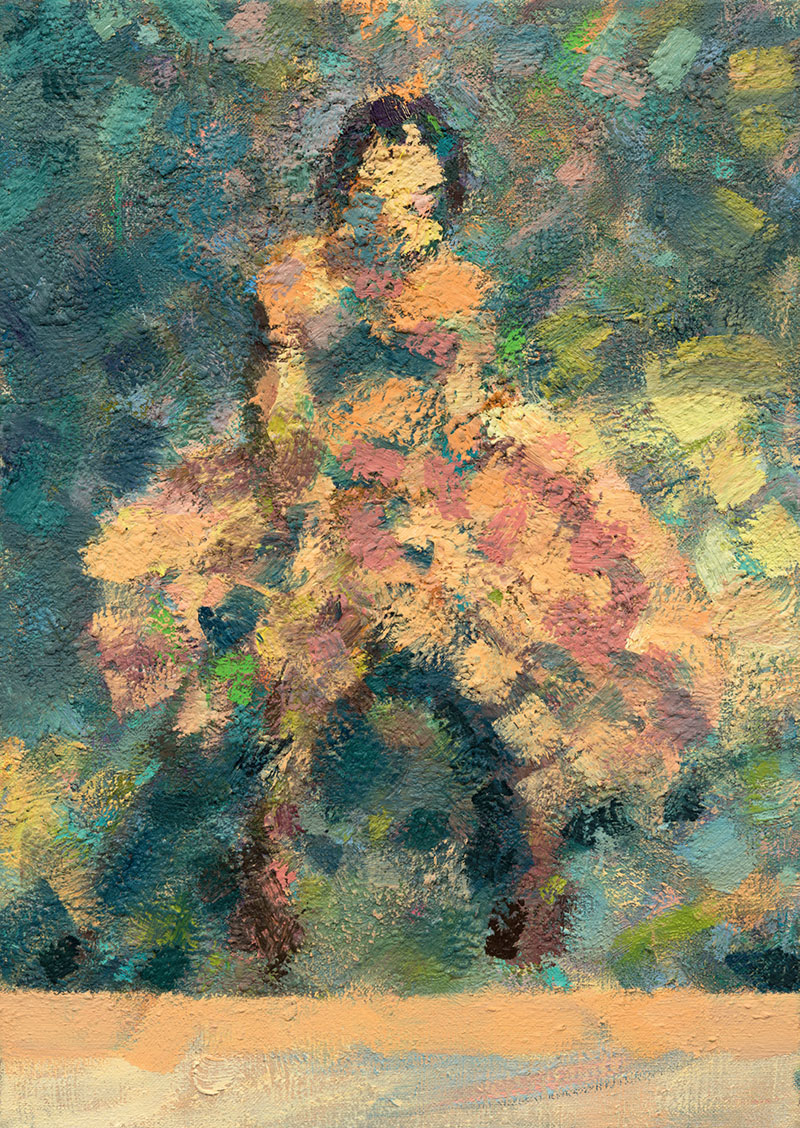 « Twice and thrice over, as they say, good is it to repeat and review what is good » said Plato. The German painter Jochen Plogsties gives a new definition of the ancient adage. Through the replication of selected images (often masterpieces of occidental painting), he puts in question creation, copy, and reproducibility. In a time where the Chinese city of Dafen is nearly entirely dedicated to the reproduction of oil paintings, can we still find substance in the oil-painted image? Formed under the direction of Arno Rink and Neo Rauch in Leipzig’s HGB, Plogsties stays faithful to Germany’s New Capital of Cool and works in a gorgeous studio of the Spinnerei.

That’s where we met in 2016. Now, I’m always nice with the people I write about, but this painter is one of the few people I actually listen to when they say something. It’s hard not to be impressed with Plogsties’ rigour and steadiness. Channelling razor-sharp wits in an infallible hand, he delivers paintings in solid square touches with an extra fresh chromatic vocabulary and a beautiful sense of light.

The core of his research is based on composition and the art of understanding the space of a two-dimensional surface. His observation and analyse of the science of composition lead Plogsties in the land of Moorish geometric patterns (to be put in parallel with the Jarmusch movie where the heroine Eve appears first in Tangier). Applying the basic principle behind Islamic design to the figurative masterpieces of Occidental art proved fruitful. Astonishingly, the grids formed by the painter become construction lines and points of power within the image. Since two years, his practice is layers of grids and masterpieces repeated, crossed and mixed who become a hybrid area contemplating secular recipes and futuristic design.

The title of the show refers to the eponymous 2014 Jim Jarmusch movie with the flawless Tilda Swinton. It also stars Tom Hiddleston before he dated our babygirl Taylor Swift and after he was killed riding the best horse in the world.. The movie is about vampires that are very cool (much cooler than the Twilight ones) who are left roving on earth while our humanity is what we witness every day – a weird pile of garbage that is quickly deteriorating, but there are some good ones). As always with Jochen Plogsties, the title is very à propos. The Leipzig-based painter openly vampirizes the images of the past in a practice that aims at uncovering a secret geometrical knowledge.

I had been waiting way too long to tell you about his work, and now the time has come to ask him a few questions.

In this show, you mix with delight Pop Culture and Classical references, what is the specific flavor you enjoy in it?

Thanks, Fleur! Painting is about pain. And pain and joy sometimes are pretty connected. For me it’s not so much about pop or classical. It’s more about how do the images I look at look like. And what happens if I paint them. I often face how similar imagery works. Painting is figuring how the main principles are set. For me it’s less about analyzing differences through time. The moment I look is the moment I start from and the taste of the paradox between eternity and here, between passing and being indeed has a special flavour.

Can you tell us about the source of this work with the patterns?

Touching special points on a field and asking what does make them special and wondering why different images, different on first sight, are using marks on the same points led to a more abstract, a more distanced view. From this point of view it’s about having a look on the main structure. And this reveals that there’s a lot about patterns. Now it’s about to face how different patterns work. The pattern that seems to be the most productive for me right now is a quasiperiodic one. Quasiperiodic patterns include that there are repetitions and differences. And so they show there is always a choice. Although acting in a pattern it’s always necessary to decide whether to go left or right.

Your reference pictures are very precisely referred to, with the differentiation in your personal source for the image (postcard, internet image, museum visit, etc.), what is the importance of this process?

We deal a lot with copies of copies of images. It seems to make sense to give at least a hint to the way an image was taken. A lot of an image seems to be between the lines, and although a lot of information gets lost in reproducing it there seems to be something stable. I don’t understand it at all. Images should be free for the development of human minds, still we are in the middle of a huge discussion about authorship and rights of owners.

You really really really love this painting by Adriaen Coorte, Still life with wild strawberries, what kind of magic does it hide?

Haha, yes. Really, everything I know about magic is connected to it. That is strange in a very beautiful way.

My absolute favorite from this body of work is the Atelier Rouge, the space in it is absolutely mind-blowing. What the heck is Doja Cat doing between Van Eyck and Matisse?

I love your questions!

How is your working time organized?

It’s all about active and passive and the implicit paradoxes. Ok, that’s a bit too abstract. But indeed, I always ask myself, what’s the most necessary thing to do next.

What do you have planned now?

« When shall we three meet again, in thunder lightning or in rain? When the hurly-burly’s done. When the battle’s lost and won. »

I like the Jim Jarmusch’s move of getting Christopher Marlowe into the movie.  He is supposed to have been Shakespeare. But there are obviously a lot of possibilities to doubt that. So let’s go step by step.

Thank you for your time Jochen, and kudos for Whodini they are one of the most underrated bands of all times.

What ? Only Lovers Left Alive by Jochen Plogsties