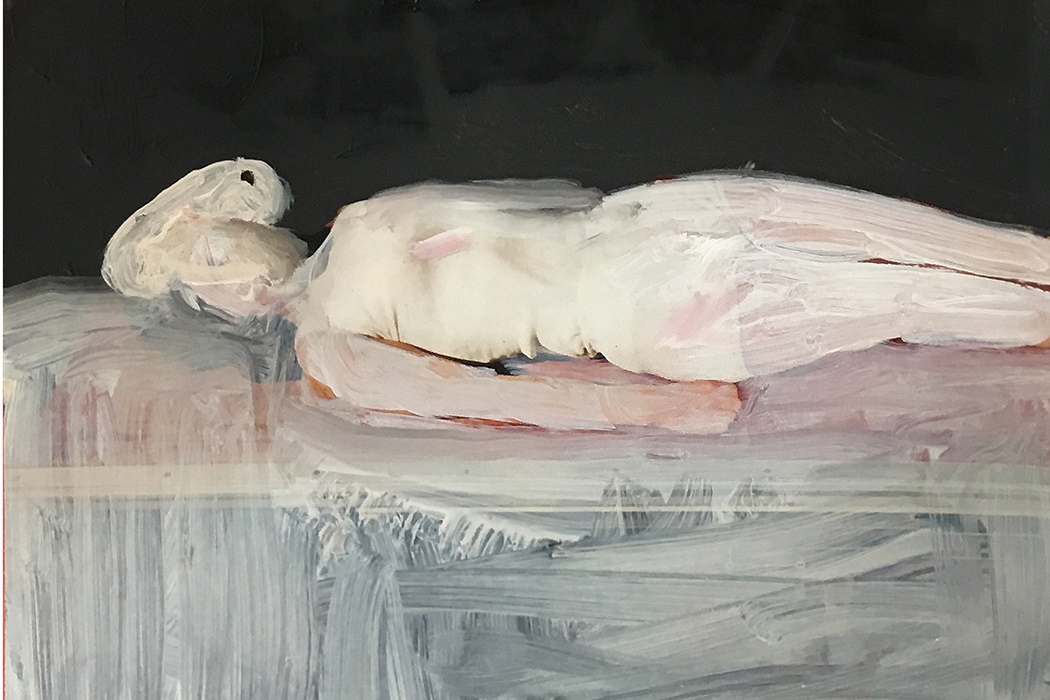 You can’t help but fall in love with Spanish artist Joseba Eskubi’s work. He often uses different techniques (painting, collage, digital …) that provide complementary processes that expand the possibilities of expression. Eskubi’s surrealist work is all about decay, and dont let the soft forms and pastel hues fool you. This amorphic melting world is made up of single figures coming from a quite dark intuitive and undefined pictorial gesture, and still life doesn’t seem so still anymore.

“In these last years I´ve worked a gestural painting, combining techniques and processes that try to accentuate the material qualities of the image. I’m interested in organic forms in decomposition, soft and amorphous qualities that accentuate the tactile sense of vision.

I usually present a kind of stage where there is a single figure, silhouetted against the background. I don´t generally represent specific elements, trying to maintain a certain ambiguity that allows the suggestion and evocation. The pictorial gesture builds a credible figure, but at the same time it is decoded as an abstract, and purely material. The idea is that each image has a temperature, a character like a portrait of an unknown thing until you create it .

I try to suggest different readings of the forms, a narrative ambiguity that transforms the figures like something open and unfinished. Organic and irregular masses that seem bodies, animals, fragments or remains…elements with different qualities presented as a still life. Sometimes I think that everything can be considered a as a big still life, each object has a weight that attaches to the land, falls down and disappears through a decomposition process.

Normally, I use a simple spatial composition characterized by the appearance of an imaginary motive on the line of land. The contrast between the figure and the background, between the mtter and the emptiness, allows the use of different pictorial registries.

I don´t use real models, these figures come from quite intuitive and undefined pictorial gesture where I find a logical representation of the own process of painting.

In my painting the representation becomes a mise en scène where space is logical, the volumes acquire degree of probability; but at the same time, the figure protagonist of the image is difficult to identify. It’s kind of interference between the illusionism of a figurative narrative the and gestuality and the abstraction.

I often use different techniques (painting, collage, digital …) that provide complementary processes that expand the possibilities of expression. There is no a searching for effectism, but rather the need to treat the same problem with different tools. Sometimes, I have worked with images of Baroque painting, introducing changes that cause a decontextualization of the original images. In these works the collision is most evident between different styles and processes.

My process is quite intuitive and fast, trying to act directly on the canvas. I work with a serial device that causes an obsessive effect, a necessity absurd and indomitable. This repetitive structure, projects itself over time like a big body beating and breathing, the strange body of painting.

I like to work in a frontier territory where the form might suggest a figure, but at the same time continues maintaining its intensity as something abstract, that causes an immediate sensory reaction. The scenic device of my painting tries to build a feeling that everything is real but all of this story is simultaneously decoded by gestures and strokes that cancel a concrete and figurative reading of the image. I generally work in a serial painting that creates a visual chain on which each piece is attached to the others, forming an insistent atmosphere, with different variations on the same theme.”