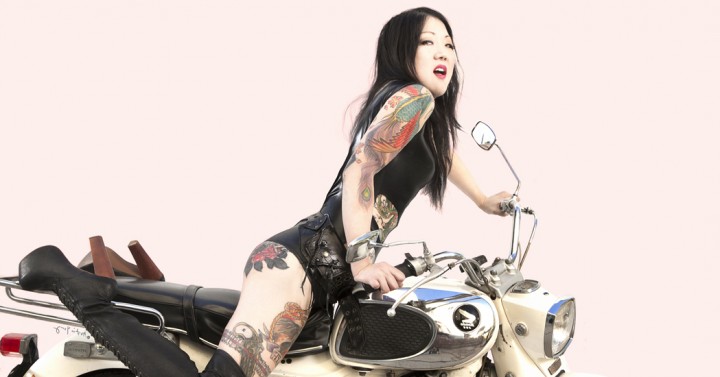 Europe are you ready for the one and only Margaret Cho?! The American comedy queen is coming to Europe with her solo stand up comedy show “MOTHER”. Margaret will perform in Berlin, Cologne, Amsterdam, Copenhagen, Olso, Zurich, Stockholm, Helsinki, Munich. Tickets are on sale now. Don´t miss the chance to see an icon live on stage. We had the pleasure to have a little chat with the star about her show, her mother and why she loves Lederhosen and her special relationship to the gay community. Lovers: Miss Margaret Cho!!

KALTBLUT: Hi Margaret! Thanks for taking the time to talk to us. You’re coming to Germany in December and you’ve expressed a fondness of performing in Austria and Germany. What is that appeals? Still rocking those lederhosen?

Margaret: I really love Austria and Germany – it’s the pretzels and the Lederhosen – which I wear all the time. I actually have about 10 pairs – bundhosen even! And very short lederhosen. I don’t have a Dirndl. I studied German in junior high and so I have a very rudimentary understanding of the language.

KALTBLUT: You often imitate your mother during your routines and the tagline of the Mother tour is: ‘Nothing is sacred. Least of all this.’ Talk to us about the importance of motherhood and your relationship with your mother.

Margaret: My mother is the best, and I have been imitating her as long as I have been speaking. I think motherhood is very sacred. Mothers build the planet, and even though I am not actually a mom, I am still a very maternal being, so this show celebrates that.

KALTBLUT: She seems to really support you. Have you ever done anything she really hasn’t approved of?

Margaret: She doesn’t like my tattoos, but she has her eyeliner tattooed so I think she’s way more hardcore than me.

KALTBLUT: What was it like growing up in San Francisco in the 1970’s? How has this shaped you and how does it influence your work?

Margaret: I got to see Harvey Milk and also watch the gay community become a major political force. I am so proud of being from San Francisco and growing up during that incredible time. I think it is always going to be part of me and my work.

KALTBLUT: You’ve been married for ten years and have an open relationship. Why is it important to be open and honest about sex and why do you think some people struggle or are repulsed by it?

Margaret: Sexuality is defined differently and experienced differently by anyone. I can only offer my own take on it, and I don’t have the same issues about privacy that a lot of people have. I think that it’s very funny to talk about sex because of the taboos and fear that exists about it all.

KALTBLUT: You’ve said it, your mother’s said it, and it’s currently on a lot of people’s tongues: “Everyone a little bit gay.” Talk to us about that.

Margaret: I think she means that we all have much more to us than being just straight or just gay – that there are a lot more nuances than we realize or acknowledge.

KALTBLUT: Let’s talk a bit about the Supreme Court rulings over Prop 9 and DOMA. What does it mean to you personally and for America?

Margaret: It’s very exciting to think that the USA is going to legalize gay marriage, but it’s going to take some time before it’s happening in every state. There’s so much to be grateful for though – I am really thrilled and cannot wait to perform ceremonies.

KALTBLUT: I’m not sure how else to phrase this, but why the obsession with gay men?

Margaret: I think I am a gay man!

KALTBLUT: You’ve been called a “patron saint for outsiders” – what does that meant to you?

Margaret: It’s always been a very important thing to make everyone feel included and cared for – it’s that I feel very different from the worlds I inhabit – entertainment and show business are not filled with people like me, but I still manage to be successful, and have for a long time. I guess I am proof that it is ok not to fit in!

KALTBLUT: How important is it for an individual to take an active interest in politics and stand up for what they believe in?

Margaret: Everyone should have a voice and everyone should feel ok about expressing their opinion. That’s important for society – that we are all heard!

KALTBLUT: I normally interview musicians so lets see if this question works here too… How would you describe your stand up and humour to a deaf person?

Margaret: I also have sign language interpreters for shows and it works well as much of what I do is about facial expressions and physical comedy!

KALTBLUT: You are doing three gigs this year here in Germany. One stop in Berlin. Have you been here before? Let’s go for a drink after your Berlin show!

Margaret: Yes please! I have been to Berlin two times but this will be my first performance there! I am so excited!

KALTBLUT: You are also well known from some TV shows. Right now you appear in “Drop Dead Diva”. What do you like more: acting or your own shows?

Margaret: I love to do both – it’s very different, but I am happy that I have so much variety in my work.

KALTBLUT: I know you are friends with Kathy Griffin and Joan Rivers. Can you tell us a funny ancedote with these two ladies?

Margaret: Kathy asked me to split a private plane with her and I couldn’t believe it! she is so fabulous and I can just imagine that would be the gayest plane ever. Joan is just wonderful and fun, a really warm and brilliant woman. I am lucky to have them as friends.

KALTBLUT: Any final thoughts or words or wisdom?

In Transition is Margaret Cho’s first web series in which she stars as the lead role of Tawny Kim. The dark comedy series is about a group of women recently released from prison. Other co-stars include Selene Luna, Yvette Saunders and Luenell who appear alongside cast members JP Pitoc, Jackie Beat, Stephen Spiegel, Kym Ghee, Mario Diaz and Will Boddington.

Get your tickets: HERE

Tour dates for the rest of Europe: HERE

Official Biography: Margaret Cho was born Dec. 5, 1968 and raised in San Francisco. “It was different than any other place on Earth,” she says. “I grew up and went to grammar school on Haight Street during the ’70s. There were old hippies, ex-druggies, burnouts from the ’60s, drag queens, and Chinese people. To say it was a melting pot – that’s the least of it. It was a really confusing, enlightening, wonderful time.” Her grandfather was a Methodist minister who ran an orphanage in Seoul during the Korean War. Ignoring the traditions of her patriarchal culture, her mother bravely resisted an arranged marriage in Korea and married Margaret’s father who writes joke books – in Korean. “Books like 1001 Jokes for Public Speakers – real corny stuff,” Cho says. “I guess we’re in the same line of work. But we don’t understand each other that way. I don’t know why the things he says are funny and the same for him.”

What Margaret did know is that she didn’t love being a kid. Racing toward adulthood to escape bullying, she began writing jokes for stand up at 14 and professionally performing at age 16. Getting picked on, and feeling disenfranchised, is a subject that’s very near to Margaret’s heart. She has become a sort of “Patron Saint” for Outsiders, speaking for them when they are not able to speak for themselves. “Being bullied influenced my adult life because I grew up too fast. I was in such a hurry to escape that I cheated myself out of a childhood. I didn’t want to go to school any more, didn’t want to be around those people any more. I want to use what happened to me to help other kids.” Soon after starting her Stand Up career, Margaret won a comedy contest where first prize was opening for Jerry Seinfeld. She moved to Los Angeles in the early ’90s and, still in her early twenties, hit the college circuit, where she immediately became the most booked act in the market and garnered a nomination for “Campus Comedian of The Year.” She performed over 300 concerts within two years. Arsenio Hall introduced her to late night audiences, Bob Hope put her on a prime time special and, seemingly overnight, Margaret Cho became a national celebrity.

Her groundbreaking, controversial, and short-lived ABC sitcom, All-American Girl (1994) soon followed. Oddly, while chosen because of who she was – a non-conformist Korean American woman with liberal views – the powers-that-be then decided they wanted her to “tone it down” for the show. Challenging Margaret’s feelings for both who she was and how she looked, she soon realized that though she was an Executive Producer, it was a battle she would not win. “For fear of being too “ethnic,” the show got so watered down for television that by the end, it was completely lacking in the essence of what I am and what I do.”