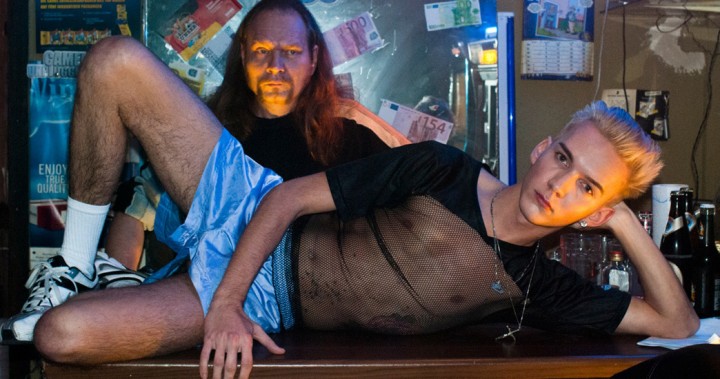 A Film By Matt Lambert. To promo a 240-hour long experimental theater piece that will be happening in Berlin in April 2014, directed by Thomas Bo Nilsson. A theater/performance art piece that will take place over 10 days straight at one of the most renown theaters in Berlin. At Schaubühne Berlin.

MEAT: For spring 2014, Thomas Bo Nilsson will present the immersive installation, MEAT. The point of departure for the installation is Luka Magnotta, the Canadian pornographic actor and alleged murderer, accused of killing and dismembering a young man. Luka was apprehended in 2012 in an internet cafe in Berlin and is said to have created a wide spectrum of online identities, rumor being that he had over 70 active Facebook accounts.

MEAT is inspired by Luka, as well as his self created alter egos, resulting in a 240 hour long interactive installation. An intact and hermetic, yet fragmented urban landscape is open for ten days and nights non-stop for the audience to explore. Over 60 actors are performing and living in the 600 sqm installation which can be visited at any time, and followed on the live online broadcast of the installation.

MEAT is a part of the fourteenth Festival of International New Drama (F.I.N.D.) taking place at the Schaubühne, Berlin. This year’s F.I.N.D. focuses on the interface between private life, art and political and social accountability.

Thomas Bo Nilsson (1984)
Swedish born, Berlin based director, architect and installation artist Thomas Bo Nilsson has been behind the large scale installations that SIGNA has presented around Europe. From 2006 until 2013 he functioned as one the artistic leaders as well as creator of the detailed installations open for performers and audience members to inhabit and become part of.

From this season on, he has created a new collaboration with a permanent group as well as project specific collaborators. For the trailer of MEAT, Thomas Bo Nilsson collaborated with film director Matt Lambert. Music by rising young producer in Berlin:
soundcloud.com/lotic

A Film By Matt Lambert