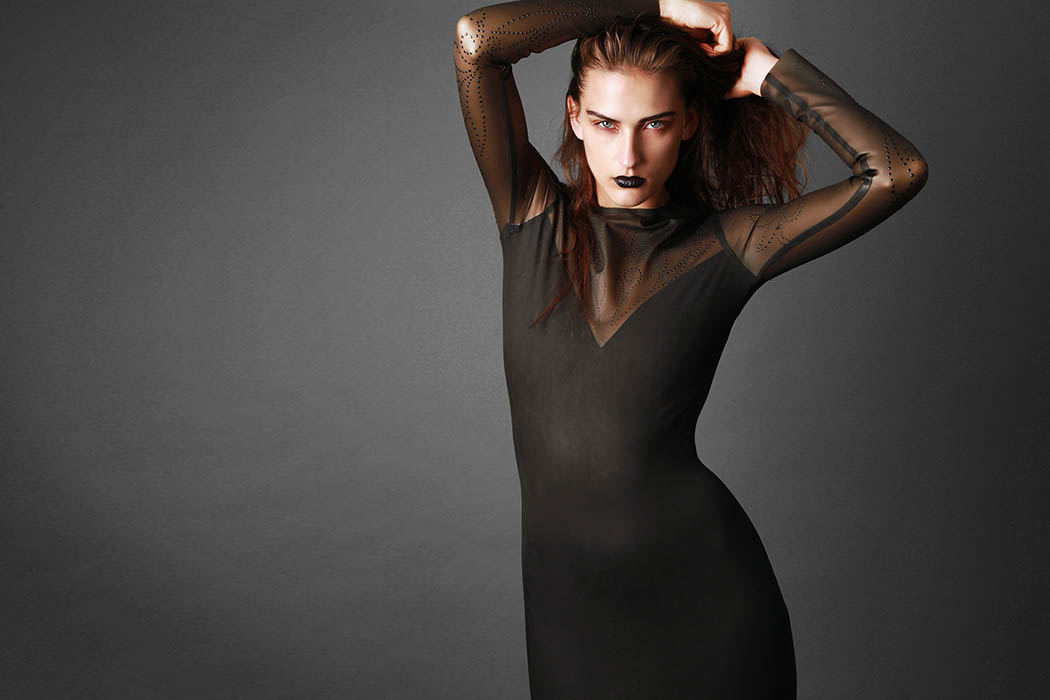 She came to me walking with the confidence of a career woman. if you think about it she actually runs a fruitful business: her beauty.  Jeanne Bouchard is the blue-eyed Canadian model signed to Models1, and she has appeared on the covers of Marie Claire, Elle and WWD. But Jeanne is not just a model to “see”, she’s also a model to listen to. At only 22 she already has a precise idea about the fashion industry, and she shows the strong will to speak out about some of its taboos. Sharp, but always graceful.

KALTBLUT: How were you discovered:

Jeanne: I took some modelling classes when I was young and I got discovered by the man who managed them. He sent me to a model agency in Montreal and from there they sent me everywhere, but I’ve been on and off for the first couple of years: I was stopping all the time to go back to school so it was never consistent. Now I took 6 months off to try to be an all-time model.

KALTBLUT: Do you miss school?

Jeanne: I do my university online now. But yeah I kinda miss being just a student cause you don’t have to stress about anything else than your classes.

KALTBLUT: Did you manage to do both?

Jeanne: If I have a busy week as a model I can’t do it, I would need to stay awake for a long time just to do my homework. But at the same time I want to keep studying because in this job one month you’re superbusy and the other you’re doing nothing and if I don’t do nothing I get bored. My brain gets bored.

KALTBLUT:So what do you to keep your brain awake?

Jeanne: I have classes every time. I’m doing accounting, logistic, all the subjects that you need to study when you have a company that produces stuff (my father has his own). I like marketing, I love math, finance. Nothing that I have to learn by heart but more kinda logical things.

Jeanne: I’m more a pragmatic kind of person. You never learn to do your taxes for example, and it was great for me when I learned it.

KALTBLUT: And what about your emotions?

Jeanne: I can be emotional, I just don’t get people that loses their way for them.

KALTBLUT: What’s the funniest thing a client asked you to do?

Jeanne: A shot in the street when I was completely dressed like an idiot. People were passing by and they were like “who’s that girl?”, you could see it in their face.

KALTBLUT: Did you dislike that feeling?

Jeanne: I don’t like to be the centre of attention in general, but when you model you’re always playing a character so if people think you’re weird you don’t mind because it’s not you.

Jeanne: I’m sure everybody else would say Victoria’s Secret. I say all the big money job, big beauty campaigns that go everywhere and make you travel in beautiful places.

KALTBLUT: Why do you think the other models would aspire to get a Victoria’s Secret booking?

Jeanne:  Cause of the attention. And the fact that you’re in underwear, you’re sexy… but every year they get skinnier and skinnier and I don’t like that.

KALTBLUT: She worked for Victoria’s Secret, didn’t she?

Jeanne: Yes, but she did when they used to hire bigger models. She said that before the shows she just got a massage, now they all have a massive, crazy workout. She’s just healthy and she cares of herself. Even is she’s older now she still looks amazing.

KALTBLUT: What has been the high-light of you career so far?

Jeanne: Jobwise I had a Celine exclusive when I was 16, but to be still healthy in this industry is the biggest achievement. That’s why I’ve quitted modelling for a while. I don’t allow people to reach my emotions on this side because if I do they could destroy my life.

Jeanne: When I was 16 I was asked to lose weight and I was already so tiny, but at this age you are too young to understand it and I was going to listen to them if I hadn’t people behind me to say that it was ridiculous. I’m not saying that it’s not right to go to the gym or to eat healthy but you need to balance it. It cannot be an obsession.

KALTBLUT: Have you ever considered yourself as the “black sheep” of the fashion industry?

Jeanne: Sometimes but I would not say I’m the black sheep. I love my job. I’m just against stuff that normal models would never talk about.

KALTBLUT: So what’s the advice you would give to a new model?

Jeanne: To not listen to anybody if not yourself or someone you really trust. Everybody will have a problem with your body. So you just have to be true to yourself and say: “This is my body. I can make it better but I accept it and love it for how it is.”. Sometimes girls look at top-models saying “Oh! I want her body” but they just cannot have it cause they have different body-types. They need to accept their own and to take critics as an incentive to improve themselves, to make themselves better, not to destroy their mind. Balance is the most important thing.

KALTBLUT: What’s the best piece of advice you were ever given instead?

Jeanne: From my grandfather: “You will never have something if u don’t work for it.” Nothing comes for free, you have to make sacrifices.

KALTBLUT: Did you sacrifice anything for modelling?

Jeanne: Of course: leaving when you’re 16, going everywhere by yourself, giving up on vacations that you’ve booked… In this job everything is last minute and sometimes you have to renounce to your life for it. But I’m really determined: if i have a goal in my mind I will try to achieve it even if there’s stuff in my way.

KALTBLUT: Would you renounce to school if modelling kept you busy all the time?

KALTBLUT: What was the last music track you listened to?