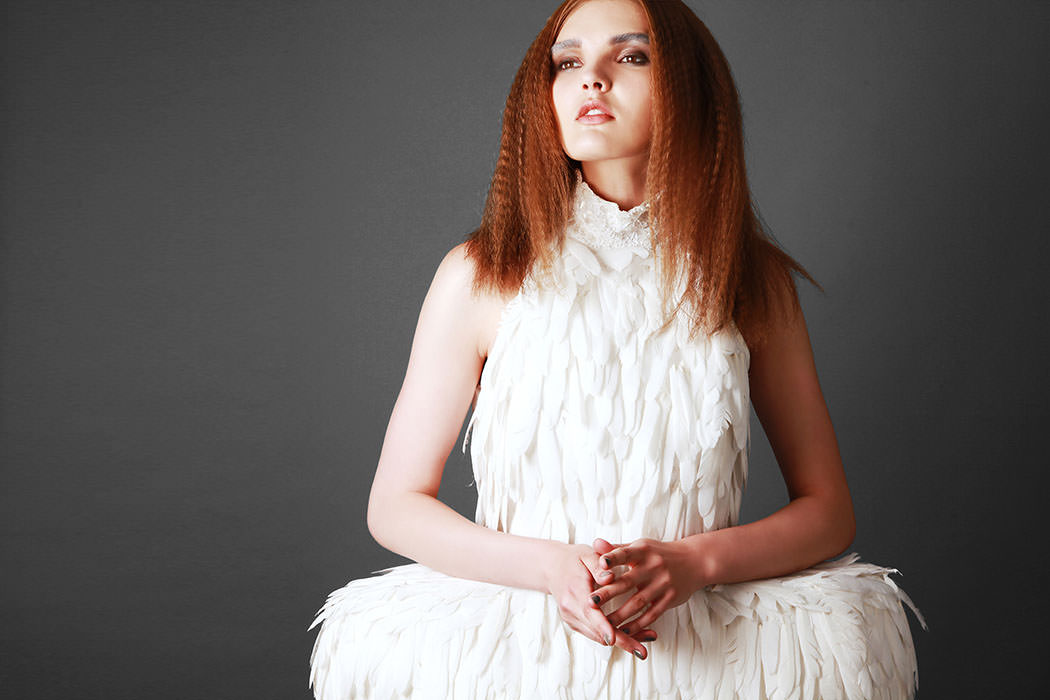 The interview didn’t start yet and she already laughs saying “So funny!”. Olga Zhukova is the beautiful Siberian model from Nevs who stands out for her super-warm heart. She appeared on the cover of Marie Claire, Travelite and Mega and she worked for Vivienne Westwood and Celine. She also acted in a fashion film directed by Maria Burns where she had to imagine she was an animal. Probably a cheetah. With elegant black spots on a bright yellow fur.

KALTBLUT: How were you discovered:

Olga Z: When I was 12 my best friend asked me to join her during a casting. I wasn’t interested in this industry, I was too young, but they chose me and they told me to go to a modelling school. I loved it: we did yoga, dancing classes, they taught us how to pose, how to walk on high heels, but I wasn’t taking it really serious. Then a scouter from America saw me and he told me I could be a good model so I started to think about it more consistently. I never wanted to become a model, it just happened. In Russia no one takes it really serious, it’s not considered as a job but it actually is. It’s really tiring, but I’m enjoying it.

KALTBLUT: How did your family react to your choice to become a model then?

Olga Z: They were great. They all supported me. I know a lot of girls coming from my country that are not supported by their parents so I feel really grateful.

KALTBLUT: What has been the high-light to you career so far?

Olga Z: When I was 15 I did a cover for Marie Claire. It was an amazing feeling, and when this cover was claimed one of the best cover of that month I was so, so happy!

KALTBLUT: So once you started to live in this fashion world you actually became passionate about it?

Olga Z: Yes, before it was just for fun now it’s a job, and I’m grateful for what I’m doing because I love it. Even if I won’t be a model in the future I’d still want to work in the fashion industry. It’s not about exhibitionism and being beautiful, it’s about seeing many countries and meet so many people. Learning new things. It’s a new world.

KALTBLUT: What’s the funniest thing a clients asked you to do?

Olga Z: My favourite shoot was for Vivienne Westwood. The photographer booked me and one of my close friends. He said that we could do anything and it’s cool when it happens because sometimes clients ask you to do the same pose of a picture they have in mind, and it’s frustrating: you want to be who you are. Anyway, during that shoot we were free so we were screaming, jumping, laughing, doing some gymnastic things…  It was so funny. I’m still in touch with all the team and this is one of the things I love the most of my job: building nice connections.

Olga Z: I really like Veruschka. She was cool. All the models are wearing black at castings because of her, because she wanted to stand out.

KALTBLUT: In fact you are wearing black.

Olga Z: Yes, but I like to wear something colourful too. I love to have colours in my life! I keep the black outfits for the fashion world, in my private life I’m more casual.

Olga Z: Watches. I like to be in time. Time is running fast and I want to make the most of it.

KALTBLUT: What’s the best thing about being you?

Olga Z: I think I’m friendly, I’m an open person, If u are in my close circle I will always do the best to protect and help you, I will give all of myself. It hurts me sometimes because sometimes they don’t appreciate it, but still I can’t change! I feel a bit naif but it’s not bad to me. I believe in positive and negative energies. If you are positive then the world around you will be positive to you so don’t be depressed!

KALTBLUT: What’s the best piece of advice you were ever given?