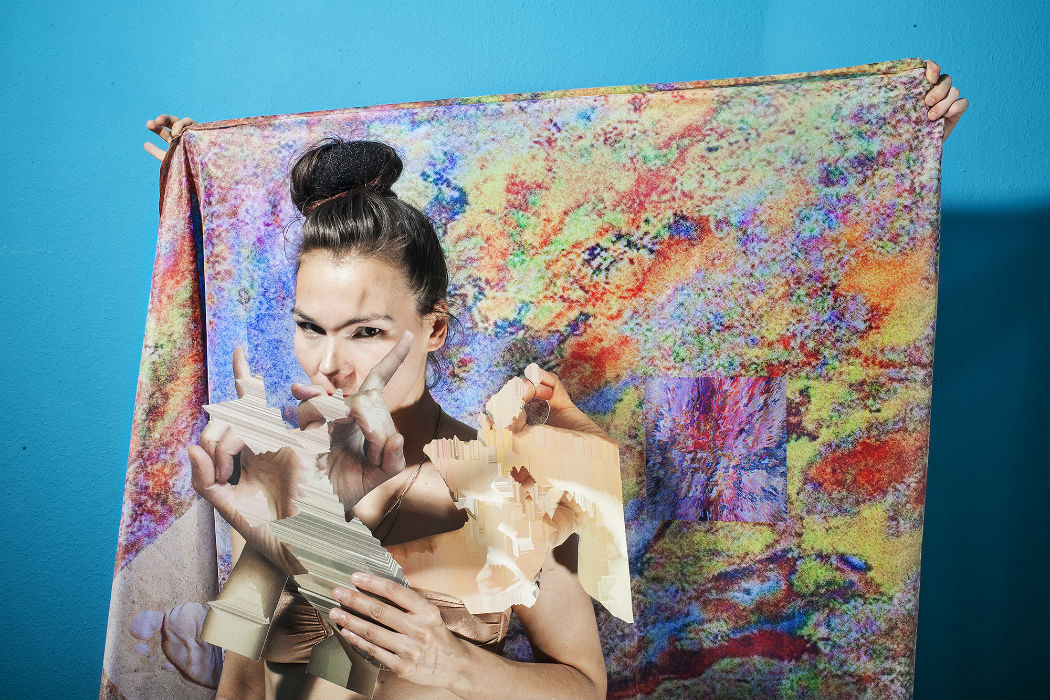 In October 2015 London’s eclectic label Houndstooth released Aïsha Devi’s Of Matter and Spirit LP. The album encapsulated the spiritual metamorphosis and transcendental journeys of this other-wordly figure. The Swiss/Nepalese-Tibetan producer Aïsha Devi oozes with an electronic almost ritualistic meditation chant, most notably through her live performances and visually exceptional collaborations with photographer Emile Barret and with Chinese artist Tianzhuo Chen. With a remix album featuring Lakker, Throwing Shade, Killing Sound and Mind:Body:Fitness hot on her heels, it was only a matter of time before Aïsha took Of Matter and Spirit to the next level: a fully immersive video game. We spoke to Aïsha and Emile about the details for this new and unexpected journey.

KALTBLUT: Let’s talk about the concept of your Of Matter and Spirit video game, where did the idea originate from? Is it simply a translation of music into moving image? Or is it exploring the depths of your inner thoughts?
Aïsha: Music is an immaterial medium that can lead to altered states of consciousness – its vibrational waves and frequencies deploys a cosmos around and within us. I like video games for that same reason, the capacity of building a universe that transcends matter and disrupts our common 3D perception. It’s an extension of the thematics of the LP, a way to confront people with the non-physicality of our existence. It’s also a kind of a virtual remix process as the tracks are dismembered and reformed according to the player and his progress in the game. The whole architecture is based on the Kundalini ascension with a structure towards enlightenment.

KALTBLUT: The usage of sound and how it builds up is so unpredictable, and in some areas is incredible, what was your approach to the sound design?
Emile: I’ve collaborated with my brother Paul Barret, who studies videogame sound design in Paris. We also play music together (so we answered the question with four hands). The music always leads the game, the intentions Aïsha has projected inside were bases to generate visuals, and exacerbate emotions. Sound design then came past these successive interpretations. The album creates an initiatory narration, we give it the role of a remote guide for the player, without texts and dialogues in the spaces. We build several soundscapes, we wanted it to change all the time, to not feel the loops, more as living sound characters than a background music. Aïsha gives us the originals layers of her music that we assigned between punctuations and repetitions, small spaces and global areas, to create a live sound-collage, with few sound spaces inside a same environment. Aïsha once told us to use the sounds like they « are blades ripping through the air”. We built atoms constructions, with a heavy center, and electrons in clouds, with their own individual way, like crossing the path of a whispering dancer in a larger ballet. This recreates Aïsha’s album in an arrangement every time unique depending on the player’s spatial and temporal positions and his decisions. Every track is like a microcosm with its own operations : concentric circles, spheres nested, vertical ascension… But we also had an interest for the spaces between the worlds and those in margins, where there is always something to hear. The spaces are built without being neither full nor void.

KALTBLUT: Will there be a way of incorporating VR with the game to intensify the experience at some point?
Emile: It would be amazing, and it’s a goal! The game is already in this lonely First Player view, and with VR the player would travel much more inside himself in this inner journey, without being disturbed as much we can be in front of a screen, on internet… In Of Matter and Spirit, the music, both the visuals and the player follow a progression from the physical to the transcendental. We built the game like a meditation wander, an elevation while opening the seven gates of chakra anatomy, through colors, metaphors, coils, symbols… The gameplay is a gradient transformation from a forgotten animal root lost in human relics, to a more abstract body perception when the full kundalini is awake : the more we progress the less the physical gravity is tangible, from walking, to jump, to fly, to a transcendental-no-up&down space, Zero Point Field, the credits. The main interactions are challenges designed to question the physical reality of visual elements, to show multiple levels in Matter, and the way the Spirit can read through, in other ways. It’s a sensorial experience, with barely any texts, rules or quests to find out what to do. The player is alone, has to change his way of perceiving this world to progress. VR increases immersion, and by extension your perceptions, your feelings while playing. What are we waiting for?

KALTBLUT: How did you come to working on the project together? Have you worked together previously?
Aïsha: We met as Emile shot my press pictures for the LP, we instantly clicked. He is an hyperactive multi-brain kid.

Emile, could you tell us a little about your art work? Is there one particular type of medium you feel most comfortable using? What subjects do you often find yourself focusing on?
Emile: I am usually photographer, still sad not to have infinite lives, but loving still lives. It’s been a big change in my head when I’ve realized that I needed to turn my weaknesses into assets. I learned a lot from the Atlas, as a medium : the ability to combine knowledge, to confront opposite contents and forms, as an attempt to understand the world, while still being confronted with this inherent impossibility of the condition of life. It represents a point of view on things among many others, and all its attributes are multi sensitive, non-fixed either in form or in content. They are then all connectable for many reasons, and together form groups that may (or may not) also complement each other. The goal is to build cross-bridges between things, conceptually, spatially, temporally … It’s also working with layers, scratch wounds, stack, cover, pass through, scramble the viewer’s gaze, put sand on the slopes, include references, work in situ, continue in all directions to mix brains!

KALTBLUT: Is interactive design / game design a new direction that you’re taking at the moment?
Emile: Amusement parks, fun fairs, interactive art always touched me deeply, because of the means they require to immersion. Video games are spatiality-less installations, illuminated museums to share images, through codes far away from usual displays and the economic problems ensuing. Interaction allows spectators to progress mentally. I’m still a beginner in the medium, learning by my own, that’s only the second videogame i did, in quite short terms. And now i’m using it for VJing, as i start to do for Aïsha’s shows ). This is probably why I love collaborations, intuitions in meanings, and maybe visual communication : this pluridisciplinary choice gives the chance to create together with a crazy range of people… Yes i want to do more!

Aïsha, you’ve mentioned Tibetan monks and spirituality influencing your music, do we see this shine through in the game as well?
Aïsha: Quasi all of my mindeset is influenced by meditation. Perception, knowledge, transcendence, chanting techniques and even spirituality is a kind of byproduct of the practice. The game was developed with these visual, atmospherical and conceptual references in mind. The Kundalini elevation, the seven chakras levels, the consciousness of colors, etc…a sort of a ludic initiation to meditation via the much more known gaming practice.

KALTBLUT: You’ve also brought up Sufism, what is it that intrigues you?
Aïsha: I’m attracted by all pre-capitalist forms of cult. It’s not about religion, but the common acknowledgment of the collective trance and the elevation of the soul in ancient sacred texts.

KALTBLUT: The game coincides with your Of Matter and Spirit remix album, are you happy with the results? Have you worked with any of the contributors before?
Aïsha: It’s a non homogenous collection, I love that. I’ve worked with Killing Sound before, they did a remix for Danse Noire and Lakker are friends.

KALTBLUT: Will you be incorporating this interactive environment into your live performances somehow? Or is this the start of more projects to come?
Aïsha: We did a performance with chinese artist Tianzhuo Chen and his performers Beio & Han in Berghain during the CTM Festival in February, the game material was combined with Tianzhuo’s visuals. The interactivity was everywhere, it was a beautiful chaos. To me, a good show should be a collective vibration in response to frequencies and energy fields, a door to the multi-dimensional.

KALTBLUT: What is next for you both?
Aïsha: I’ll be touring intensively til the end of the year, Emile will be with me for the visuals on some of the gigs. We are in a constant collaboration. It’s a happy trap.

You can check out the Of Matter and Spirit game here