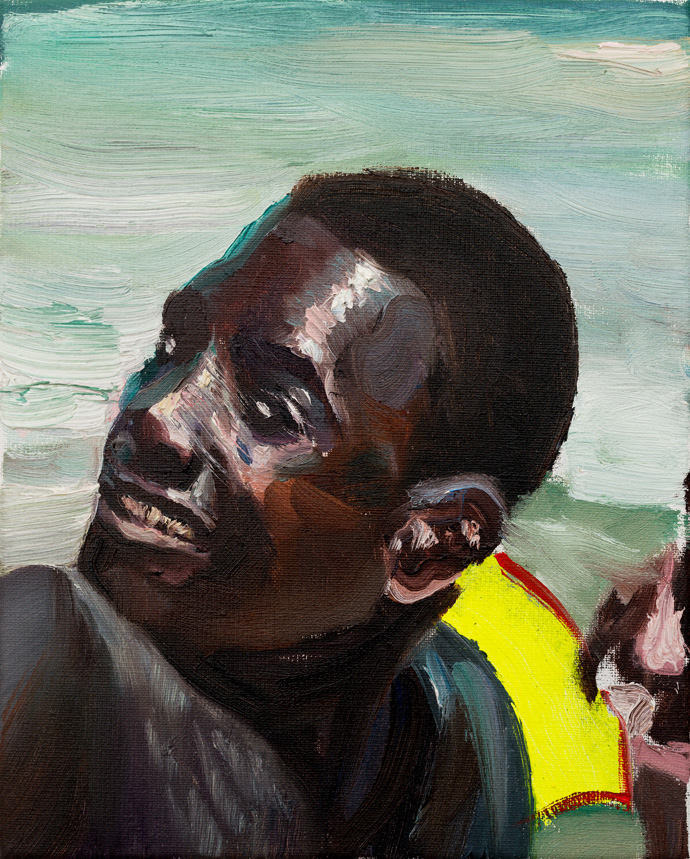 Passion Painting : Feathers, Body Oil and Samba in A Luz do Fogo by Daniel Lannes

Yes, it’s summer. Do you feel like you need an extra spark to light up the hot season? Go to Daniel Lannes’ show ‘A Luz Do Fogo’ at Magic Beans Gallery.  The Brazilian painter has been in Germany for a few months with a residency in the famous Baumwoll Spinnerei in Leipzig and he now based in Berlin. But the diet of wurst and bier didn’t seem to have taken the Brazil out of him. The paintings he presents are gorgeous in every sense : luscious colors, opulent compositions reminding me of Tiepolo and Rubens, and my favorite part – ass, body hodiho and more ass.

Coined by many as one of the best Brazilian painters of his generation, Lannes explores beach clichés with a voracity tainted with a strange melancholy. In his work, the fun is so ripe that you get the feeling of being on the edge of the end. It feels like the last moments of a night before dawn : all of this is coming to an end, and this perspective multiplies the beauty of the painting.

In A Luz Do Fogo (Light of Fire) a sensual celebration is present, although the inherentvoluptuousness is no more the leitmotif than the obsession with the alchemy of painting fostered bythe artist. Nevertheless it is worthy to say that Daniel Lannes ́ works shown in German context leadus to reflect about disparate and contrary perceptions of the body and sex in Germany and in Brazil, whose catholic matrix associated with the indigenous and Afro culture has generated a society that moves between the taboo of sinful nudity and the natural drive of undressing amid a scenario of ubiquitous dense nature. The Europeans brought shame to the tropics, and from the conflict between the refusal and acceptance of imposed traditions, a society was born whose biggest feast is that one which celebrates bodies in ecstasy.

The show runs until August 2nd, and I strongly advise you to check it out, as with painting, you have to see it in real, the screen is not enough!