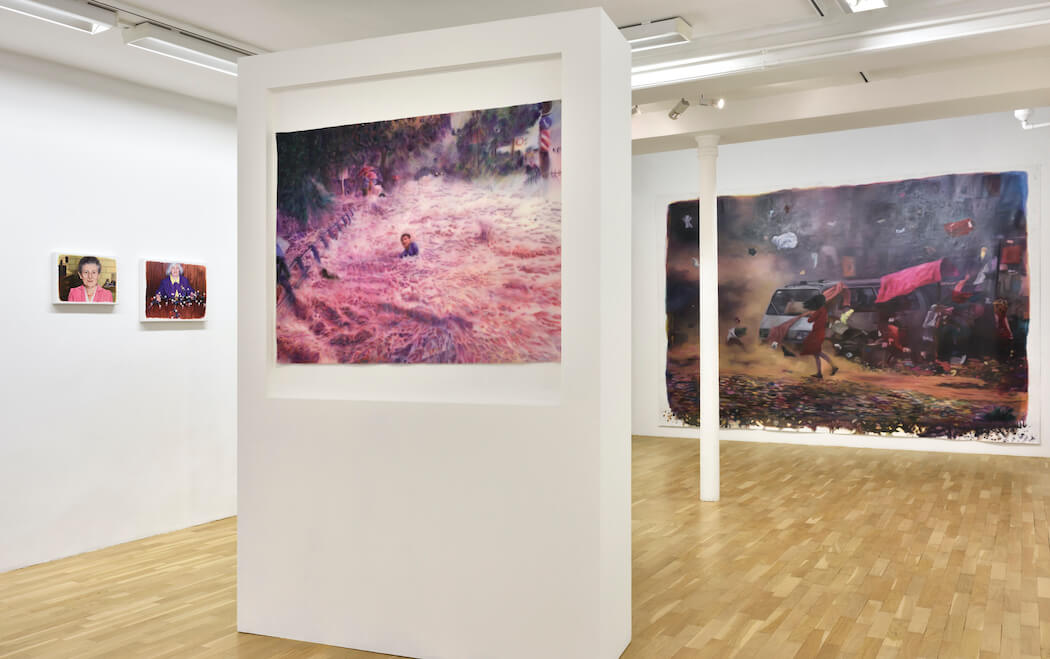 My subtitle might be heavy, but Katharina Ziemke’s new effort displayed at the Galerie Isabelle Gounod in Paris is everything but. The show creates a conversation between depictions of climate outbursts and portraits of female scientists whose works have been undermined in science history.

The paintings all show a blurry border with round edges, building a distance with the viewer. It looks like it could be mental images appearing in the mind, or secret documents that we see in a dark room in the ’60s (yes, I have a lot of imagination). The chromatic genius of Katharina Ziemke is booming in the works, with gorgeous hues and subtle contrasts of tones – brilliant pinks, flesh tint and pastel coral (Lab (Alma Levant Hayden)), a more classic ultramarine and Naples yellow combo (Storm 8), or my personal favourite cobalt and golden-green (Dr Wu #2). Alternating oil on canvas and watercolours on cotton, she opens a window on her painting process with visible watercolour marks still visible in some works. I find this a very interesting direction in her work, where plastic perfection gains power in being subverted by the traces of the actions, giving a feeling of the overwhelming elements that are in motion in the works.

The exhibition is an artistic comment in the global intersectional discussion, putting physically together with the matters of global warming inducing climate catastrophes and the historical stifling of women’s achievements in the scientific community. Mixing ‘historical’ (after all, the storm paintings are representing something that happened, like a battle with the elements) painting and traditional portrait, Ziemke is also imposing herself in the traditional male-dominated academical painting genres. It made me think of course of Adélaïde Labille-Guiard. If you know your Female Painters History, you will remember that her massive historical work was ordered to be destroyed by Jacques-Louis David, erasing her from the dominant painter’s scene and leading her to the loony bin for a while.

By establishing a visual relationship between the two corpora of works, Ziemke’s voice is clear. The show is invigorating to see, for the eyes and for the mind. Go to Isabelle Gounod! Buy the works! Share them on your Insta!

Katharina ZIEMKE was born in Kiel (Germany) in 1979. She now lives and works in Berlin, where she settled after her studies at the Ecole Supérieure des Beaux-Arts de Paris (Joël Kermarrec studio).

Thank you, Katharina, thank you Thibault from Galerie Isabelle Gounod and thank you, reader.

All images belong to the Artist.