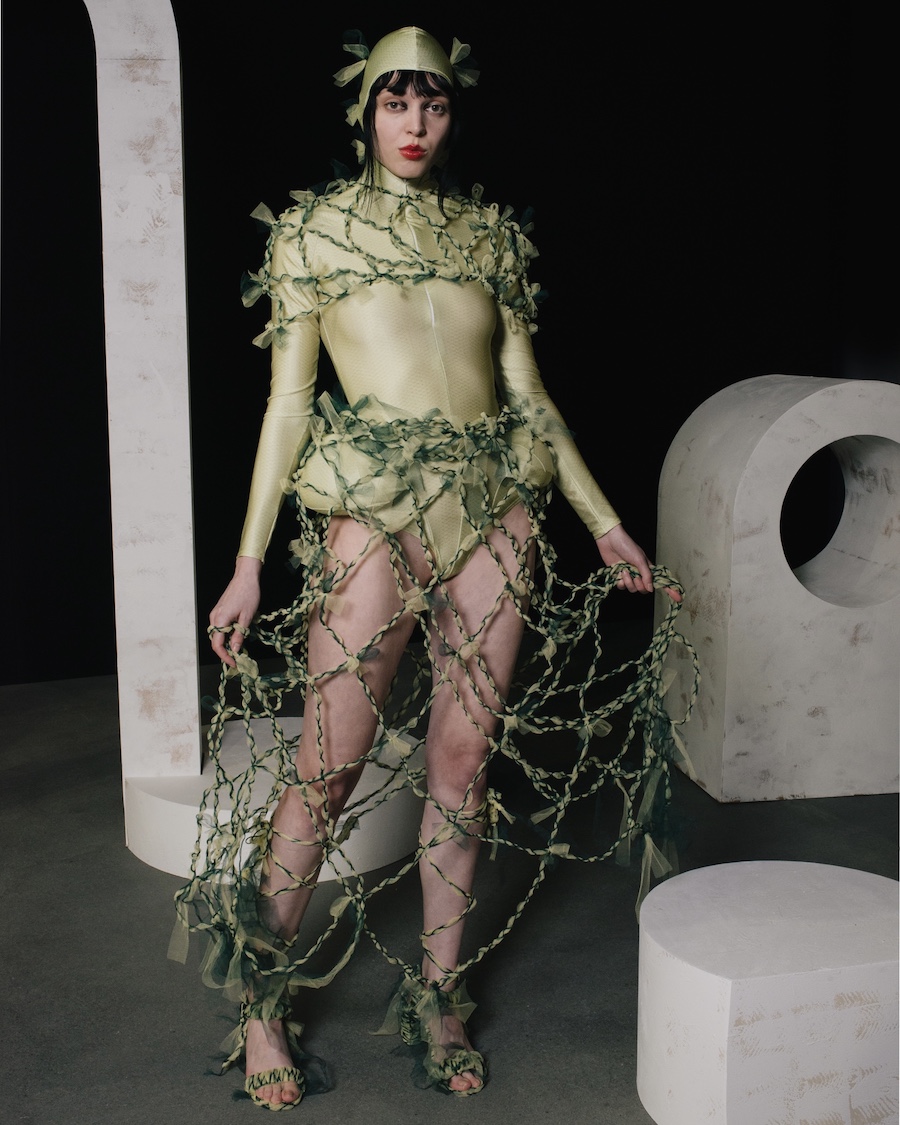 #Lookbook – Playing with perspectives in a rather unsettling time. That’s what Laurin Schuler’s current collection is all about. The 21-year-old presented his second collection Perspectiversial as his own fashion hotspot at the Reinbeckhallen in Berlin on April 10, 2022. Since the middle of last year, Laurin Schuler has been working on what is now his second collection, which he is putting together alongside his studies at the Berlin Weissensee School of Art.

With the use of the material tulle, Laurin Schuler follows up on his debut collection Denim Soirée, which he showed in Munich in September 2020.

The shimmering fabrics – depending on the viewer’s angle of vision – constantly produce new effects. Through light and glow, the multifaceted material tulle is staged in surprising ways. The oscillation of the different layers of tulle on top of each other and the resulting moiré effect seems to be the real image of a partially deceptive perception. The silhouettes of the collection, reproportioned in places, vary between tight-fitting pantsuits and bodysuits, dresses hand-woven from tulle, and dead-stock tulle finishes on shoes and headpieces, allowing the material to appear in its various guises and colours.
The concept of perspective and surprise in viewing also played an important role in the presentation of the collection.

Together with mfe event director and AMBION – the international production company for live experiences and digital productions – Schuler presented his clothes in a fashion show at the Reinbeckhallen. 200 visitors were able to watch the presentation live on-site, where the models were presented during a lightning storm instead of on a catwalk. Accompanied by a comprehensive sound concept by Moritz Kniepkamp, the event hall was transformed into a show hall, where the audience was presented with the collection through light, performance, sound and lighting, while at the same time being included as background. The final open photoshoot in the hall in front of the sculptural set by Lorenz Beckmann rounded off the fashion show, which lasted a good hour.

It makes a difference in how clothes are presented, especially for young designers new to the fashion world. After all, the catwalk and the big stage are always considered. The shift to virtual space is changing the dynamics in the fashion industry.

And that’s why it is even more important for Laurin Schuler to bring people and fashion together again. www.instagram.com/laurinschuler