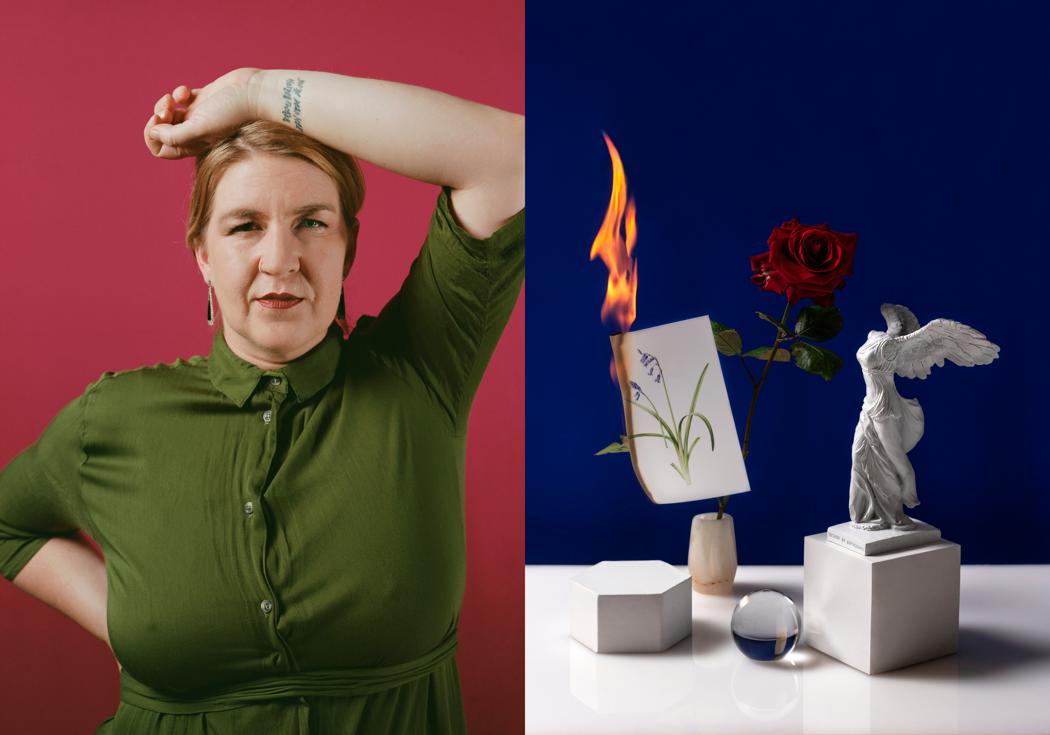 Martina Lajczak is a photographer based in Vienna. “Political Karaoke is a photographic discourse, a political statement, interpretation and portrait. The series shows a fragmentary observation of the current activist music scene in Vienna and tries to pay attention to the political topics that are discussed within this scene. The project consists of twelve analog portraits of musicians that are Austrian and/or living in Vienna as well as twelve correspondings digitally shot photographic visualizations of politically relevant songs, that the musicians themselves chose. Political Karaoke in its attempt to draw an axis between photography, politics and music also deals with the question how relevant political contemplation is in the production of applied photography in the present time. “

Andreas Spechtl / Libertatia – Ja, Panik (2014)
Libertatia was an attempt to understand emancipatory politics as a celebration. But also as something that is never finished and always in the making. Just like the revolution won’t be a finished house that you can move into immediately, but one that has to be constantly renovated and expanded.

Just Friends and Lovers / So What – Plaided (2012)
The song “So what” celebrates and defends feminist D.I.Y. rights. It is about a free and playful access to creating music and about women not letting men tell them how they should play their music. It should be allowed and appreciated to loose control together and to move beyond what is expected, familiar or „normal“. Plaided are an important part of Viennese feminist music history and we were lucky enough to play some concerts together in 2011 and 2012.

The Telly / Shout to the Top! – The Style Council (1984)
This song from the mid-80s, the peak of Thatcherism, is on one hand a description of the social, economic and political everyday life of that time, and on the other hand an invitation to rebellion. A soulful pop song, which, coming from the perspective of the little man, ultimately sets the only right direction for the protest.

Martin Zenker / Hubschraubereinsatz – Foyer des Arts (1982)
The 1982 NDW masterpiece ‚From Bullerbü to Babylon‘ includes this pearl of a song, which doesn’t call for self-empowerment or protest, but nevertheless makes a political diagnosis in its own way and judges it. Against the horizon of that time, of the newly developing neoliberalism, the mechanism of the public, power and politics (which are still well known to us today), are held up to us as mirrors by the means of trenchant oversubscription. Trapping people through scaremongering and promises of security are means to an end in the political power struggle in the neoliberal risk society. A ridiculous spectacle, today as well as then.

Vera Kropf / Unter dem Plaster liegt der Strand – Schneewittchen (1978)
This song remembers me of my political and musical socialization in the 1980s in the alternative school in WUK, where we used to sing this song. For a sampler (curated by Ulli Mayer) for the MA57, I also recorded this song with Lisa (band member of Luise Pop) in 2012.

Fauna / Rettet die Wale – Gustav (2004)
I chose Gustav‘s song “Save the Whales”. In fact it was a little difficult to find the right song for me because there are not so many, or at least not enough, songs that currently appeal to me politically or that I find politically relevant. Fortunately, there are more and more songs dealing with feminism. But I consciously chose a song that turned out to be critical of the system because I personally deal more with this topic at the moment.

Voodoo Jürgens / Das Ende des Kabarett – Heinz R. Unger, Musik von Willi Resetarits (1979)
I chose the song „Das Ende das Kabaretts“ written by Heinz Unger and composed by Willi Resetarits. The song is something like the seller of the later proletarian passion and shows how persistent the subject of fear of terrorism is.

Denice Bourbon / Bluebell – Babes in Toyland (1992)
I think I would always say Bluebell from Babes in Toyland. That‘s where I have my tattoo from and it‘s my kickass feminist anthem together with my best friend.
I always loved these lines: „Lo and behold a girl with a goal“ and: „I know you‘re right, everything you do is right. Everything I do is true.“ – hearing those lines about „right“ as sarcastic towards the normative world. My tattoo says: “you‘re dead meat motherfucker“ by the way.

Dacid Go8lin / Prisoner – Xéna N.C. (2019)
I selected the song „Prisoner“ by Xéna N.C. because I think she is quite a good newcomer and would like to support her. I also find the topics she addresses, such as mental illness, systematic oppression, etc., pretty cool. It is important to me that people hear or get in touch with that song, because many people feel the same way and could relate to it. And because music is our constant companion, in all possible situations, Xéna is a hot tip for everyone.

Dives / You are the Problem Here – First Aid Kit (2017)
If a sexual assault happens, often the woman gets blamed for it. For example, when the assault gets excused by the outfit that the woman was wearing. It is about an end to Victim Blaming and about making those who are actually responsible responsible.

Clara Luzia / The Militant Ecologist (based on Fischia II Vento) – Marc Ribot feat. Meshell Ndegeocello (2018)
I chose this song because I think that this whole environmental issue is always connected with the notion of the side contradiction. The public discourse and all this failure to act reminds me very much of a debate at the beginning of the last century, where the so-called „women‘s question“ was always the side contradiction in capitalism. In the fight for universal suffrage, for example, the right to vote for women is a contradiction. And when it comes to the environmental issue, I always have the feeling that it has the same “problem”: “First we have to solve everything else, equality and hunger and dwindling employment and digitalization, and then we can take care of the environment at some point.” And I absolutely don’t understand it – the environment is the most pressing question. The song is actually a partisan song, which Marc Ribot adapted to the topic of ecology.

Mwita Mataro / Mensch – Herbert Grönemeyer (2002)
I think that „Mensch“ is a political song, regardless of Herbert Grönemeyers motivation to write this song. For me, the chorus is crucial because there is so much racism and homophobia and sexism nowadays, and people forget that we are all human, and the text of „Mensch“ reminds you of that. My family comes from Tanzania, so unfortunately my parents and I also had to experience racism and hate in Austria – and hearing that, from a very well-known, white german artist, how he is reflecting on being human gives me hope somehow.