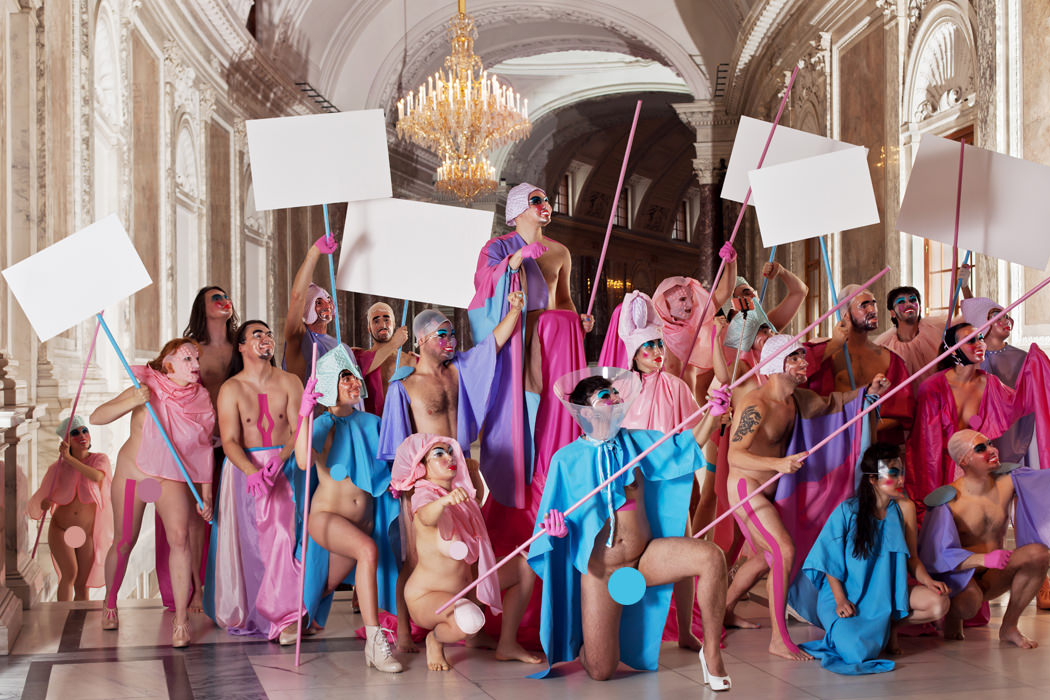 The artists Florian Aschka and Larissa Kopp work both individually and as well as part of various artists‘ collectives. In their artistic practice they focus on staged photography and utilize performance as a humorous tool to investigate queer strategies and to question predominant role models, as well as mythology and the notion of a collective cultural memory. Their last project “Queer Revolutionaries…?” has just been shown in the The Academy of Fine Arts in Vienna, Austria; and will be presents again, this Spetember in the MUSA (contemporary art collection of the Department for Cultural Affairs of the City of Vienna).

KALTLBUT: HI! How did you both meet and how did the Queer Revolutionaries…? project started?
Florian: Back in 2006, I was searching for a flatmate, and I decided then – a bit reluctantly, to be honest – to take Larissa … which turned out later on to be a match made in heaven. After I think one year or a bit less, we started to fool around and do photo projects just for fun. And after a while, we figured out that we have quite similar taste, similar aesthetics and ideas, and a common background (including having been raised in the conservative Bavarian countryside). As time went by, we became more and more professional, and we’ve continued ever since.
Larissa: Right – we started living together first, and it took a bit until we’d figured out that we get along well with each other. That was in 2006. Since then, we’ve done lots of great projects together, and there’s no end in sight.

KALTLBUT: What is the main idea behind Queer Revolutionaries…?
Larissa and Florian: Queer Revolutionaries is the attempt to show how torn queer people can be in their protest, their resistance, and their wish to change a patriarchal and neoliberal society – which we all live in. But we like to pack our ideas in lots of layers with historical and contemporary quotes and iconic references to generate a kind of wonderful queer onion, which you have to peel and peel until you reach the core of the idea.

KALTLBUT: Queer Revolutionaries…? is not your first collaboration. Actually you’ve been working together quite a lot. Looking through yours collaborations, it is obvious that all your projects goes in one direction, there is an evolution, always a step further.. Do you always start a new piece of work based on what you did before….? What drives you, both, to work together?
Larissa and Florian: Actually, sometimes it feels a bit as if we were starting again from scratch every time, but in the end, of course, you can draw on traditions you’ve established long before – regardless whether you look back at your aesthetics, the art-historical quotations, or the queer topics.  Working together as a twosome is, in a way, our form of protest against the idea of the artist-as-genius. It’s a miniature community of sorts that practices solidarity and works against the idea of the neoliberal individual exploiting themselves to the point of total breakdown.
And of course, it’s very efficient in terms of the projects themselves if you can share skills, knowledge, and resources with the other artist. Sometimes, you can even learn more that way than any art university could teach you.  Apart from our projects as a duo, we also work together with other groups or artists … with HOTEL BUTTERFLY, for example, or with Georg Klüver-Pfandtner.

KALTLBUT: What is the message you want to get across to viewers of your work?
Larissa and Florian: That you can crush a system in style. No, just kidding. It’s that you can protest and fight against an oppressive and unwholesome system, although you have to take care not to create similar hierarchies after getting rid of the old ones. And we want to create awareness of the self-optimizing culture to which many people submit themselves. For example, you’re told everywhere that you have to work on yourself and your body in order to fit into certain ideals and to be successful. We see ourselves, as well, as part of this mechanism to a certain extent. But we think it’s an important first step to be aware of it and make others aware of it, too. And for this to also happen in very open and self-conscious queer communities.

KALTLBUT: What is thing that you most appreciate in your partner?
Larissa: Flo is very good at ironing our performance costumes, and he pushes our projects forward whenever I tend to get too lax. I think we complement each other very well. Also, I appreciate that he has exquisite taste and marvellous eBay-Skills! He finds lots of our props online.
Florian: Larissa is definitely the calmer one of us two. She always keeps a cool head, and she’s perfect in structuring and planning work flows. And when it comes to crafting skills, she’s way ahead of me. Whereas I think I’m the one in charge of small talking with people and making contact with strangers (which are also among the things you have to do as an artist).

KALTLBUT: What is your ultimate goal ?
Larissa: I want to move people, catch their interest, change their views, create a community. And last but not least, it would be nice to live from our artistic work one day.
Florian: I would love to give people different perspectives on their daily lives and also give them tools with which to reconsider their perspectives, morals, and ideas pertaining to society and gender. Being able to live from our artistic work is not that important to me. ;)

KALTLBUT: What are you working on at the moment?
Larissa: In September, we’ll have an exhibition at the municipal art collection of Vienna (MUSA), where we’ll be showing an extended version of Queer Revolutionaries…? After that, we’ll go to LA for a show at Cal Arts organized by Zoe De Witt. This is something we’re already very excited about!
Apart from all that, we also want to keep on working on new forms, as well as on how we can expand the concept of Queer Revolutionaries…? into different directions – for example, actual protests.
Florian: This weekend, I’m flying to Madrid and trying to get some fresh input for new projects. I think that Spain is such an inspirational and fantastic place for queer people, at the moment. There are such great projects there, such as “el palomar” or “storm and drunk,” organizing such good exhibitions, performances, and the like.
And for the near future, it would be nice for us as a duo to have the opportunity to take part in an artist in residency program. So if any of your readers have any recommendations or perhaps even run such a program themselves, they’re quite welcome to contact us! ;)

WHAT: “Queer Revolutionaries…?” an exhibition by Florian Aschka & Larissa Kopp
WHERE: MUSA (contemporary art collection of the Department for Cultural Affairs of the City of Vienna), Felderstraße 6-8, 1010 Wien.
WHEN: Opening is the 14th of September, 7 pm. The Show will run till the 12th of October.