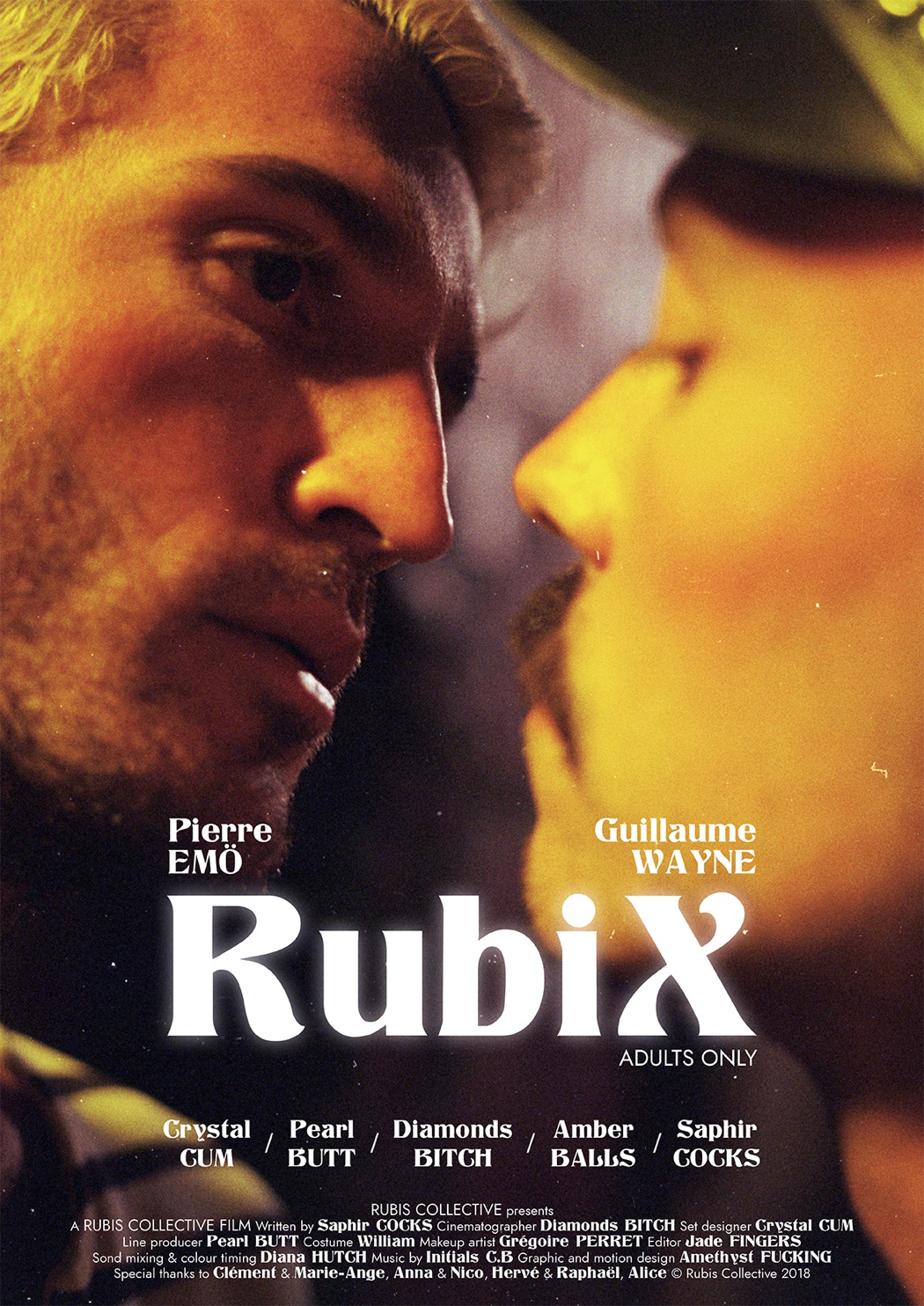 Our first film, RubiX, is like an essay on pornography, with a non-linear narrative and a dreamlike aesthetic, paying tribute to past homoerotic figures (Genet’s sailor, Tom of Finland’s leather man, Derek Jarman’s St. Sebastian…), all of that mixed on a mosaic of more contemporary porno-tropes. The film is not actually representative of what we want to do with the narrative side of our films, especially because it is completely centered on the sexual act, but it represents our influences, our tribute to the history of pornography and gay sexual representation. It is starred by Pierre Emö and Guillaume Wayne, both actors that we found on social media (Twitter and a big story involving Planet Romeo).

Rubis shines with its bevels that reflect the pleasure of the body. Ze is translucent so that we can see through to the surroundings behind it. Ze says that everything is an image or symbol to manipulate. Ze proclaims that sex does not occur without the diaphanous context of which ze consists. Ze declares that the multiplicity of its faces are as much narration as the tales ze whispers. Ze expresses that desire has hir polyhedral form, that hir edges are impulses. In the palms of the spectators ze murmurs desires, ze awakens their impulses, electrifies their skin, sets their fragile fingers in motion, sharpens their voyeuristic appetites, lights their incandescent pupils, ze shakes their jerky breaths, heightens their instincts and stimulates their organs, ze evokes their pleasures, ze exalts their satisfaction after having intensified their passions.

Would pornography be deemed pornographic according to a shifting scale depending on the observers’ perspective? Obscene, outrageous, immoral, ze sees in it the look on the work more than an intrinsic reality. If pornography is defined by the way it is viewed and used by its spectators, how do we know if something is or not pornographic? Ze can easily imagine the wide variety of desires, the multifaceted fantasies, and thinks that everything can be eroticized or pornographic. You might be wondering if porn is the object that makes the viewer come, or is it the act of watching work for the purpose of reaching an orgasm that makes it pornographic? In other words, what is called pornography is not just explicit sexual images but also involves the consumption of the work, a history of cinema, criminal law, censorship, economic policies, societal changes, and the relationship to the intimate, in short, a dispositif. In France, there are laws in cinema to protect films containing explicit sexuality from being classified as pornographic if their approach, their aesthetics, and their narrative process, make them a piece that is not solely sexual. You understand then, that the problem of the legal categorization of pornography is that it segregates genres. It draws an insuperable line between what is deemed as pornographic and what is considered art. Thus, under pressure from legal categories, they argue this is not art, it is pornography.

Ze remembers that one day, someone said “pornography is the eroticism of others,” and then changes her mind. Was the original sentence not “the eroticism of the poor”? Ze reflects that in every word, every category, and every conventional manner of thinking, there is the effect of a power structure. Moreover, was pornography not constructed by the inquisitive eyes of rich white men in order to protect the working class, especially women, who would not be able to take their representations seriously? Have not they invented pornography as a legal category to shield those others who are susceptible to being softened by onanism, perversion and lust? Ze thinks then that this paternalism is old-fashioned, obsolete, archaic, and that the expression and representation of sexuality should no longer be taboo, discredited or despised. Ze says to hirself that ze will leave the task of defining whether hir films are pornographic or artistic to the sensors and the judges. Ze would like to be both. Ze claims that we should rise against this system that builds pornography, that we should destroy the category pornography, its architecture, its geography, and its infamous temporality. Nevertheless, ze wants to be called pornographer and hir films pornographic. Ze will not attempt to blot hirself in a hypocritical gesture by calling hirself erotic, but ze will proudly wear the infamous label to empty it of its meaning, and to show that its intrinsic substance has nothing shameful, licentious, or degrading.

When ze formulates these thoughts, ze feels strongly about an inheritance. Ze thinks ze’d like to belong to this lineage of artists who have made explicit sexuality an ode to pleasures, Mathew, Da Silva, a feminist missile, Despentes, Engberg, a takeover, Lust, Sprinkle, an object of introductory knowledge, Ovidie, Clark, a work of art, Genet, Cocteau, a political gem, Soukaz, an aesthetic expression, Bidgood, Alejandro, an alternative representation, LaBruce, Lambert. Do not be fooled, ze does not invent a single thing, but ze brings her own look, hir subjectivity. And then, ze thinks with joy the etymology of pornography. If it is a question of representation of the prostitutes, then ze does not see anything offensive or defamatory, ze feels refreshed.