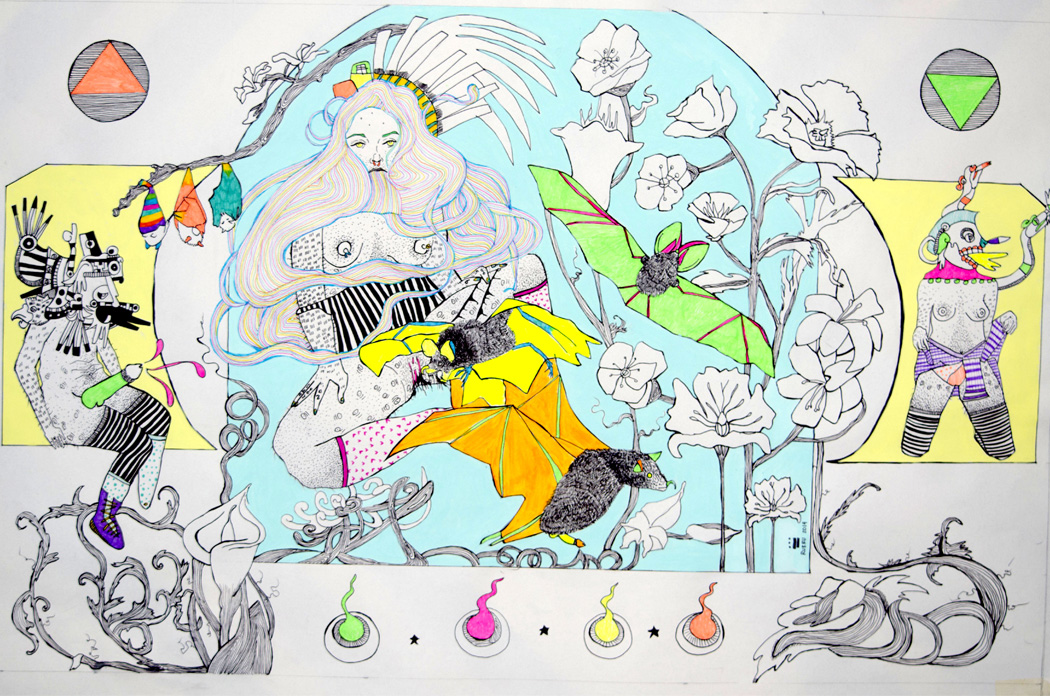 Rurru is a Mexican illustrator based in Berlin. She works a lot with sexual dissidence and gender distinctions in order to fight stereotypes imposed by  what people have learned to call “beauty”. Her illustrations are based on representations of she-males and pre-Hispanic deities. The idea is to present the explicit sexuality gradually while addressing it naturally. 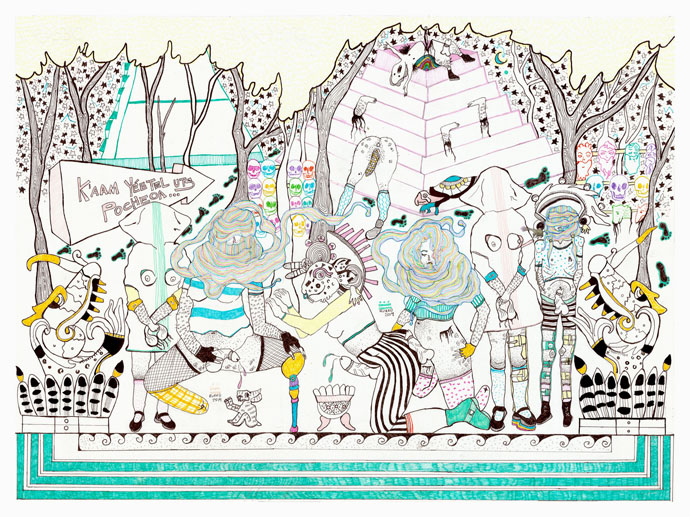 KALTBLUT: Who are you, where are you from and what do you do?

Rurru: I’m Rurru Mipanochia from Mexico city, I’m 25 and graduated from Facultad de Artes y Diseño, UNAM. Now I’m living in Berlin. I love a lot of things, like Nutella (that reminds me that this morning my roommate was really pissed off with me because I had emptied the whole jar) and old fairy tales. But more than Nutella I love illustrations. 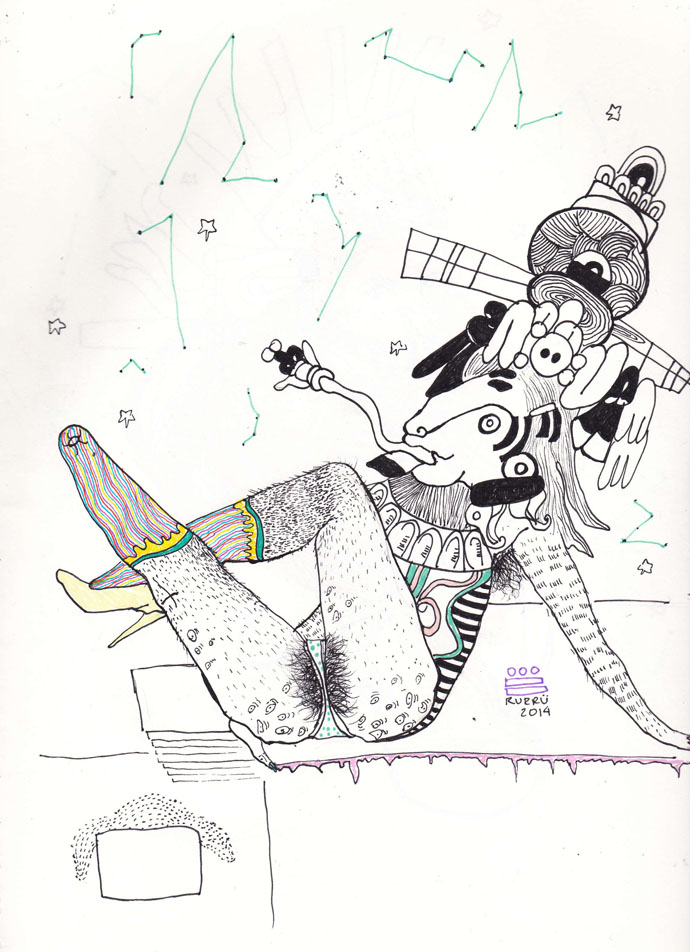 KALTBLUT: When did you start drawing?

Rurru: I started drawing when I was a kid; I’ve always loved fairy tales and old illustrations or children’s books.  My favorite illustrators used to be  Edward Gorey and Quentin Blake, actually I wanted to be  a children’s book illustrator. At that time I didn’t know I would end up drawing cocks!

KALTBLUT: Did you go to a Art School? (if yes, where? How did it help you develop your style?)

Rurru: Yes, the name is “Facultad de Artes y Diseño” (Faculty of Arts and Design), it is a Faculty inside  “Universidad Nacional Autònoma de Mèxico” (National Autonomous University of Mexico) in Mexico city. I studied Visual Arts.
And, indeed, I think school helped me in some way to develop my style. I became more sexual in every way hahaha, you know?  The school’s spirit somehow helped. People there didn’t have so many prejudices, they didn’t judge each other a lot. That was cool. Besides my life has always been very sexual in all aspects, for me it’s a LIFESTYLE. My parents are doctors, my dad is a Gynecologist, so, they approached us (my sister and I) about sexuality in a natural way, “Nos hablaban al chile” like we say in Mexico, which means more or less “ they speak to us the truth, openly”, calling things by their real name: “penis”, “vagina”, not “winnie” “Pimmel”, or “kitty”. I think they did a good Job. Children are not stupid, people should always talk to them openly about sex,  so they have the knowledge and perhaps they will know how to act in cases of sexual assault. Not let others manipulate them for their innocence and naiveté, trying to handle the situation, and maybe in that way we could avoid molesting cases. My parents are really cool, I mean they let me dress as a “boy” because I didn’t like dresses or girly stuff. Now I like dresses too, and sometimes wear them, because I feel like a tranny and I love to play with that. Hahaha, so, maybe it is like my photography teacher told me once “You really had to be in art school to take all your shit out and turn it in to something creative”. 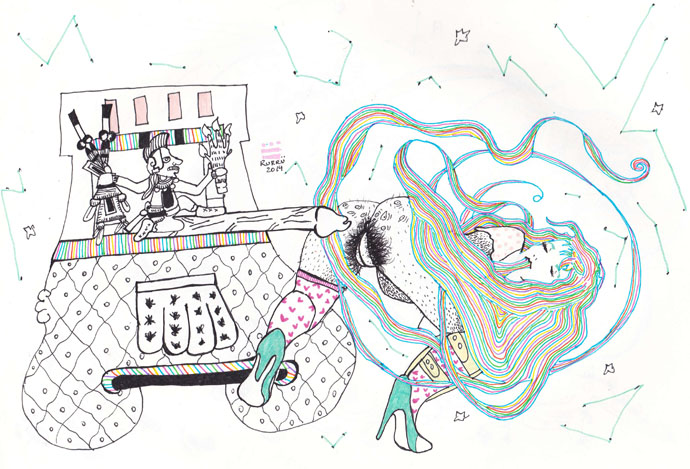 KALTBLUT: What inspires you when you’re drawing?

Rurru:  Well, I like sex and everything about sex hahaha like anyone else, and I think  that is something that moves me on doing what I am doing. But my main interest is to address sexuality outside the physical standards that the system imposes on us. My characters have a belly, lots of pimples and most of them  have physical “defects”,  they are amputees or they use orthopedic stuff. And that is because  I believe all bodies  are beautiful  in their own way and they don’t need to be within the established pattern of beauty. I’m usually drawing people with “female” bodies but with cocks; trying to promote dissident sexualities. Also in my work I try to address some ancient history, mainly represent some Huastec’s gods (Huastecs were the most sexual civilization in Mesoamerica) like Huehuecóyotl  and Tlazoltéotl (Gods of sexuality), or some antique rites. 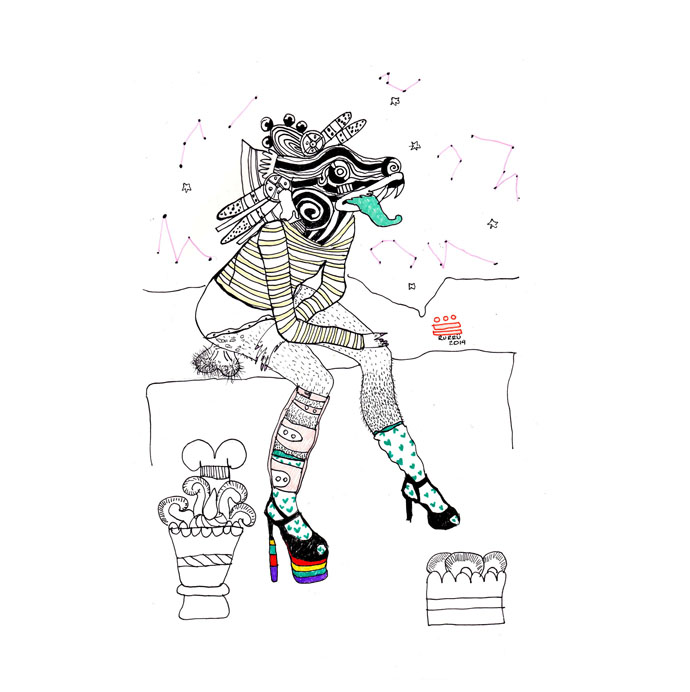 KALTLBUT:   Your images talk also about gender. How important is this theme for you?

Rurru:  Gender is an imposition of the system. You cannot be labeled in any way just because  you are born with a vagina or a penis. That  doesn’t makes sense .  I believe that gender is  something that is built in an individual way. And individuality is something that must be respected. 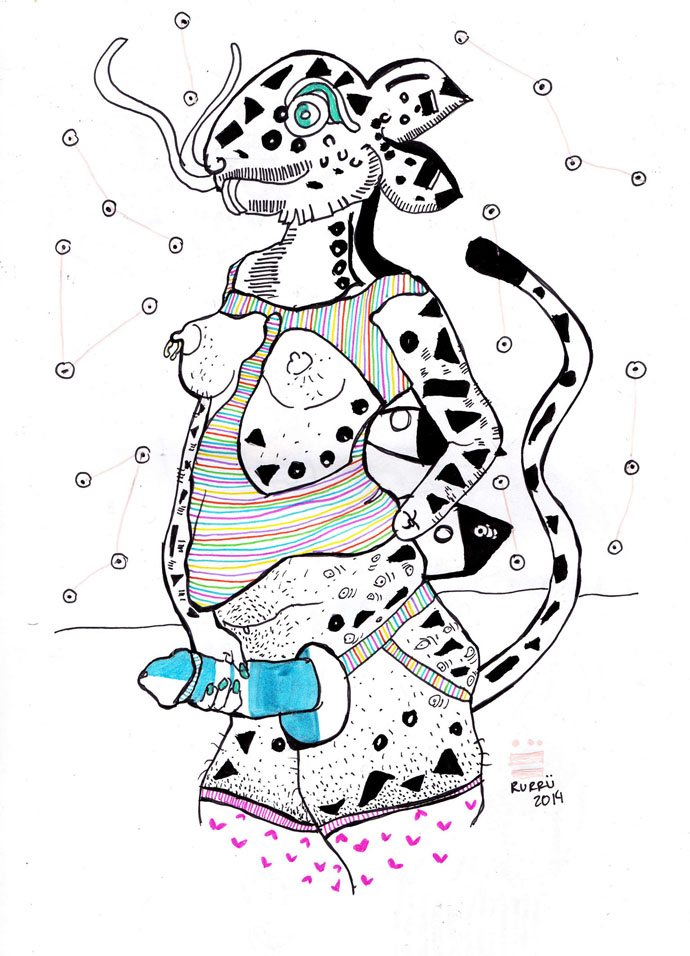 KALTBLUT: Do you have a mentor, artist that inspires you? 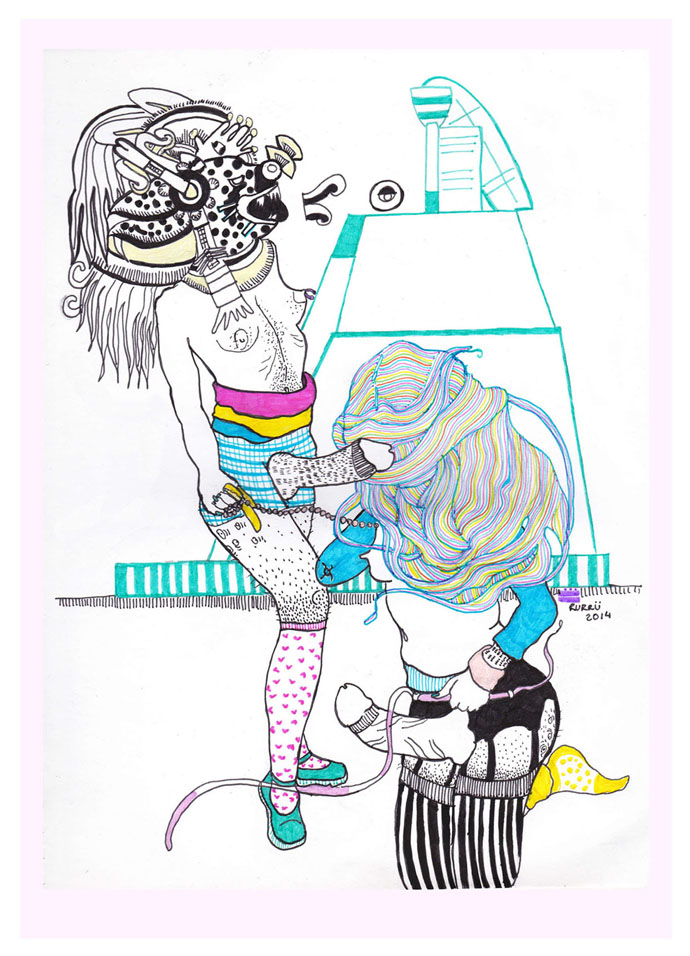 KALTBLUT: Is there any particular message that you want to bring across with your drawings?

Rurru: I’d love people to feel really happy and comfortable with their own bodies as they are, and to not be embarrassed to have sexual “fetishes “  because I think we have to live our sexuality freely no matter if it does not fit into the parameters of normality that the system dictates, we have to see sexuality as something that is, something really common and something that is everywhere. 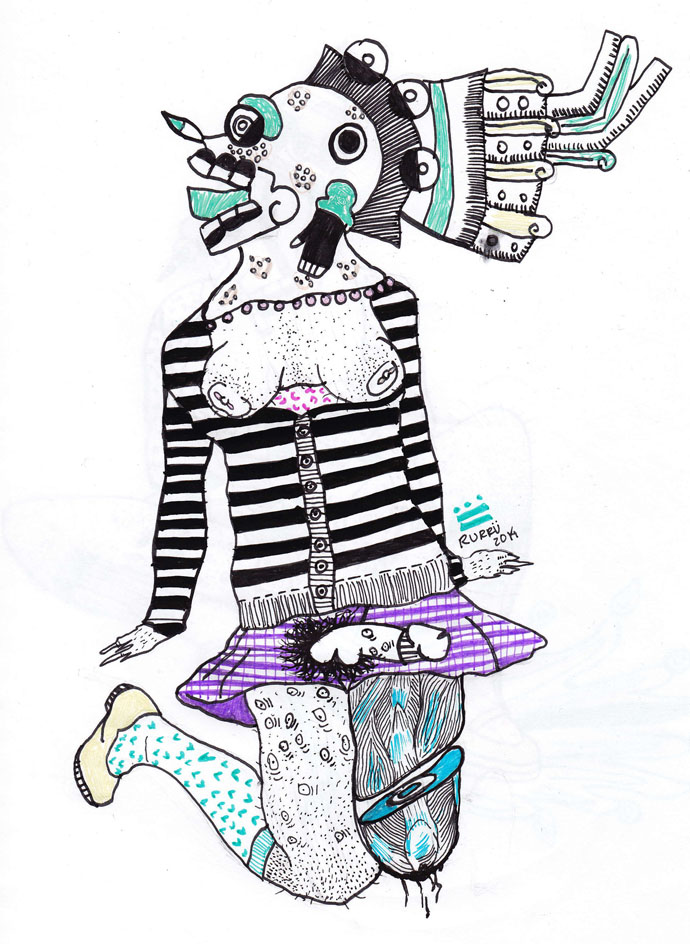 KALTBLUT: You are from Mexico but you now reside in Berlin. How would you describe the creative/art scene in the two different countries? And how did both cities influence your work?

Rurru: Well, all my life I have lived in Mexico city and the truth is that the magic of the country caught me. There is a lot of mysticism around, old customs, legends, that are prevalent even today, although slightly modified after the conquest. Germany also has that mysticism that catches me, ancient and a little bit dark fairy tales. And I must confess I am in love with the editorial design of all the old books, or even new ones. You pay a lot of attention to it, and that’s really cute. Youth style is all around the city, that’s really cool too. Berlin is a huge city like Mexico city, full of life, but I think Berlin really pushes me to do street art, there is a LOT OF STREET ART IN BERLIN, there is more freedom for doing it here than in Mexico. So, the city is pushing me to try to interact more with it. Which is something I’d love to. 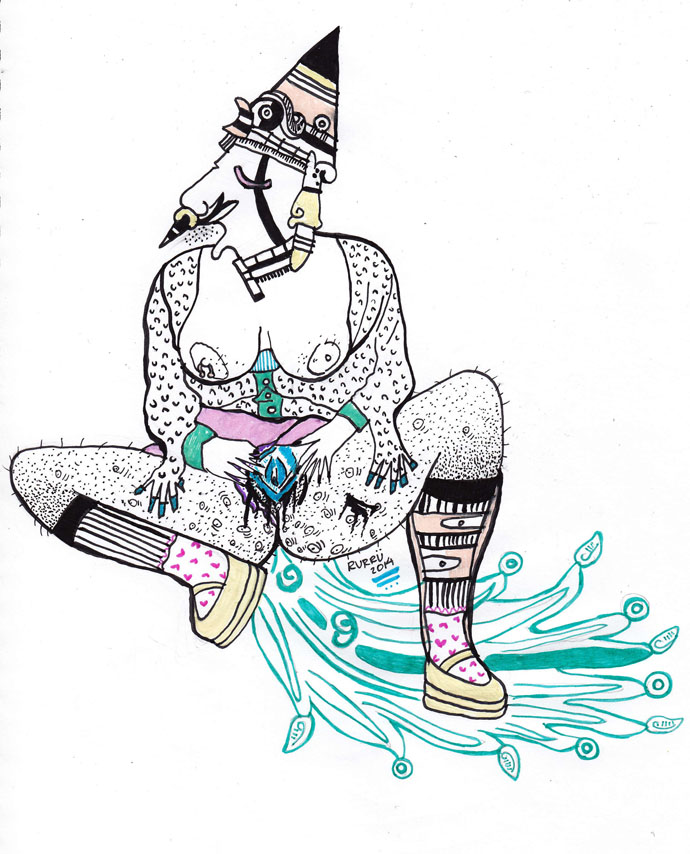 KALTBLUT: What do you hope the future will bring for you and your illustrations?

Rurru: I dont know, I don’t like to think about the future a lot, it scares me, I get stressed, but I hope good things, and if not, I’ll try to make good things happen.

Rurru: Right now, I changed the format of some illustrations, which are originally small and I’ve re-drawn them in bigger size to paste them in the streets of Berlin. I am also developing the production of some cardboard assemblies to put them in some areas of the city . 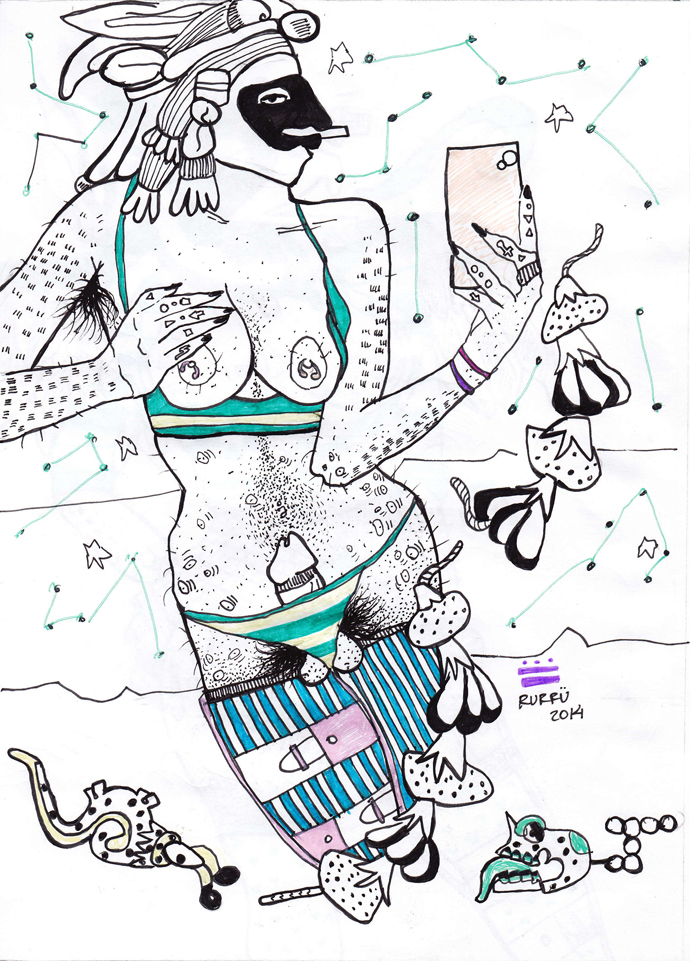 KALTBLUT: How did you come to street art? Was it a natural step after your illustrations?

Rurru: Street  is the daily life of most people. I think it is good to express yourself using the city as a platform . That reminds me of when you are a little kid and you have lots of thoughts and ideas inside of your head, so you feel the necessity to take them out, something is pushing you to take them out, maybe you think everything around is sad and needs color and more life, so you  beginning painting the walls, but then  someone realizes what you are doing and you’re grounded. Something amazing about Berlin is perhaps that even though doing Graffiti is kinda illegal (as in most cities, and that sucks), if you paste stuff here and there nobody cares, coz there are people all the time pasting poster events. I have always felt interested in street art, since I was a teen, but never did it before. I just started some months ago in Mexico city, pasting stickers because I believe art should reach everyone. We know art is elitist  and only reaches  a few eyes and I don’t like that, even though I don’t dismiss the idea of selling stuff in galleries or whatever. I mean it is really nice if you get paid for what you love to do. But my main interest is  to reach all kind of people –of course, for the moment, just addressing this context-,  and making the message visible for people who are not constantly in touch with art environment.