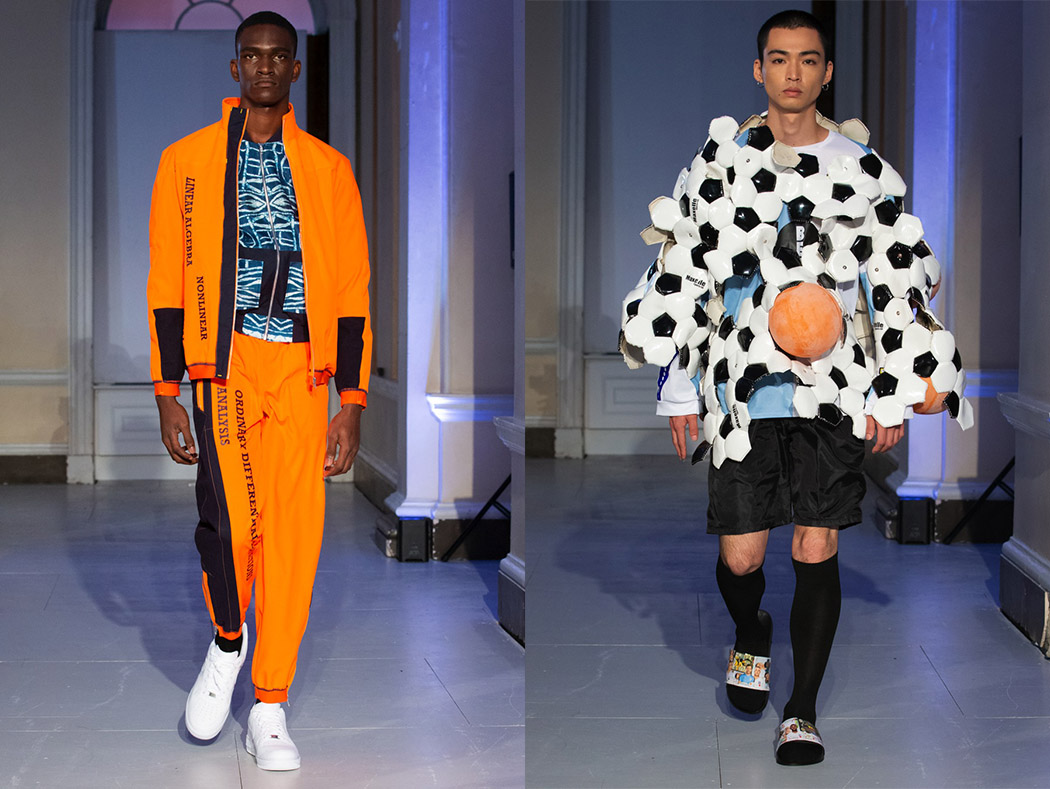 The University of Salford, Manchester UK, presented its first ever graduate show at Somerset House during London Fashionweek, courtesy of NAMESldn. Held in the Lancaster Rooms, the live runway show debuted 13 talented designers with 32 models and over 100 looks, featuring football fanatics, glam rock and rollers, anime enthusiasts and a streetwear heavy gang of tomorrow. Shining bright with a diverse cast of models taking centre stage displaying themes of cultural identity, historic global ancestry and gender fluidity with every step they took.

Luka France, who opened the show, for example, captured the passion of local football teams and their supporters. Engaging with the players, managers, groundskeepers and fans alike, Luka wanted to express a sense of solidarity and strength of connection they all feel through the use of football inspired garms. Using donated fabrics from football teams and manufacturers, upcycled into a fully functional and sustainable collection. “In the uncertainty of Britains future, this collection hopes to bring everyone together with strong tribal colours and a playful, but personal, attitude.”

In stark contrast, Purple Vain is a collaborative collection from two designers, Ellice Power and Meeko Armstrong Worthington and is based on iconic rock and rollers and their wild, glamorous lifestyles. Their flamboyant stage presence being through feminine embellishments juxtaposed with more masculine aspects of sartorial tailoring.

Amelia Payton took inspiration from her own father and how he adapted to British culture as a young African prince. Curating her own mini archive of photography and stories from her family and friends which she reinterpreted to create a collection packed full of menswear staples but with a relevant and unique twist in each look.

Whilst Samantha Ryan was heavily influenced by installations created by Feminist artist Joana Vasconcelos, inspiring the young designer to create her own kitsch universe by translating her techniques into creating her own print and textile compositions. Mixing kitsch textiles and a 70s Spanish summer trend. “I imagine the setting from my collection to be on a party island in the 70s where boat loads of party goers from all around the world arrive to share their different clothes and experiences. From sunset to sunrise.”

A final standout arriving in show closer Nid Matomela who wowed from the word go with tartan ensembles inspired by what it means to be an honourable man.Describing himself as a “fashion outsider” Nid represents a progressive “politics of 21st Century youth” through his collection, reflecting on his life and reality. Believing that clothes celebrate the journey of self discovery as the embodiment of who I am right now, from what I have experienced.