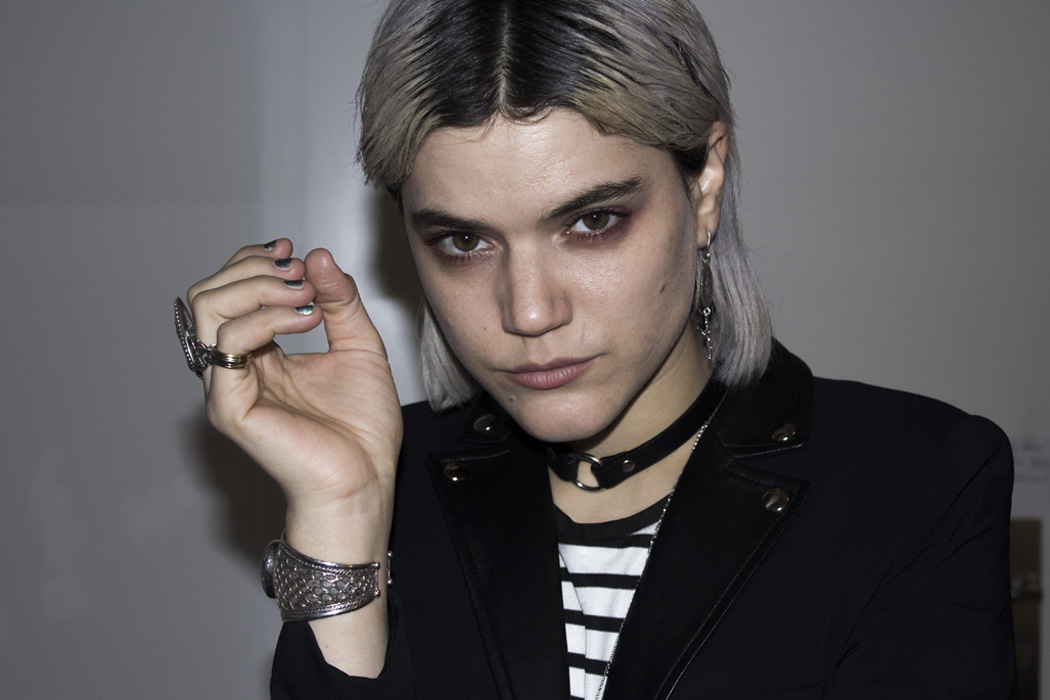 Our favourite French alien sat down with KALTBLUT to talk about her new album, pledges and her time with Ross Robinson in LA! With her second full length album, ‘My Dreams Dictate My Reality’, SoKo has shown a different side of herself with a perfect melancholy mix of stoner-rock-pop-punk. 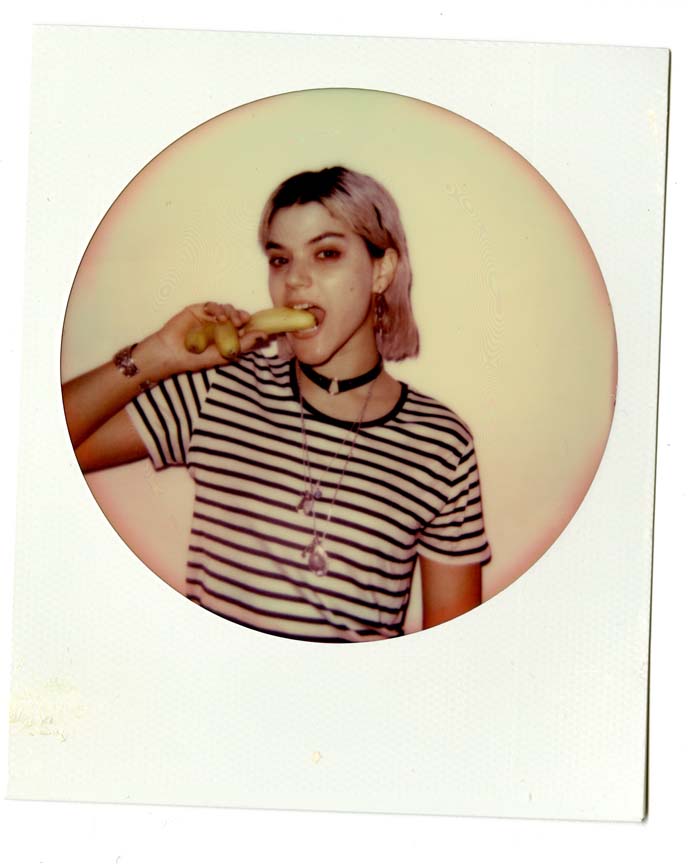 She certainly sounds like she’s had a lot more fun producing this record in comparison to the last! With help from legendary producer Ross Robinson, SoKo tells us about her ups and downs, from Paris to LA, back and forth through her whirlwind of a life at the moment. SoKo isn’t here to tear shit up, she genuinely comes in peace. Hell, she only wants someone to take her to Disneyland for the day. 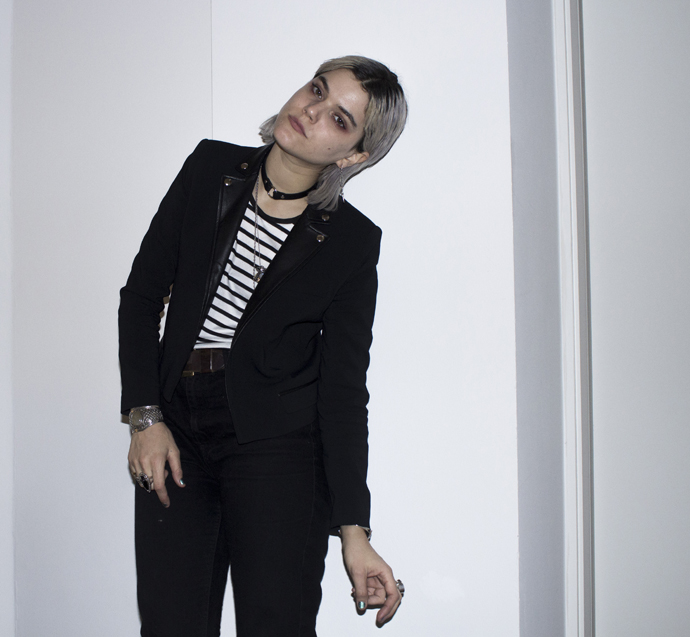 KALTBLUT: How did you become involved in music?

SoKo: I stopped school at 16 and then I started working for a bit. After that I was in this weird acting school that was really competitive and I don’t have one bit of competitiveness in me. So I just felt very attacked by people. I don’t work very well with grades and stuff. I just always want to do my best, but it needs to be for life. I can’t do it for grades, that means nothing to me. I just wanted to do my own thing, so I stopped school. Then I was acting, and that got quite boring quickly because I felt that I was not really controlling anything. I had to wait for other peoples bad ideas and I just wanted to do my own thing – I had my own ideas. I wanted to make my own art, be self sufficient. I wanted to self create and not just wait around for people to dictate what I’m supposed to do or not. 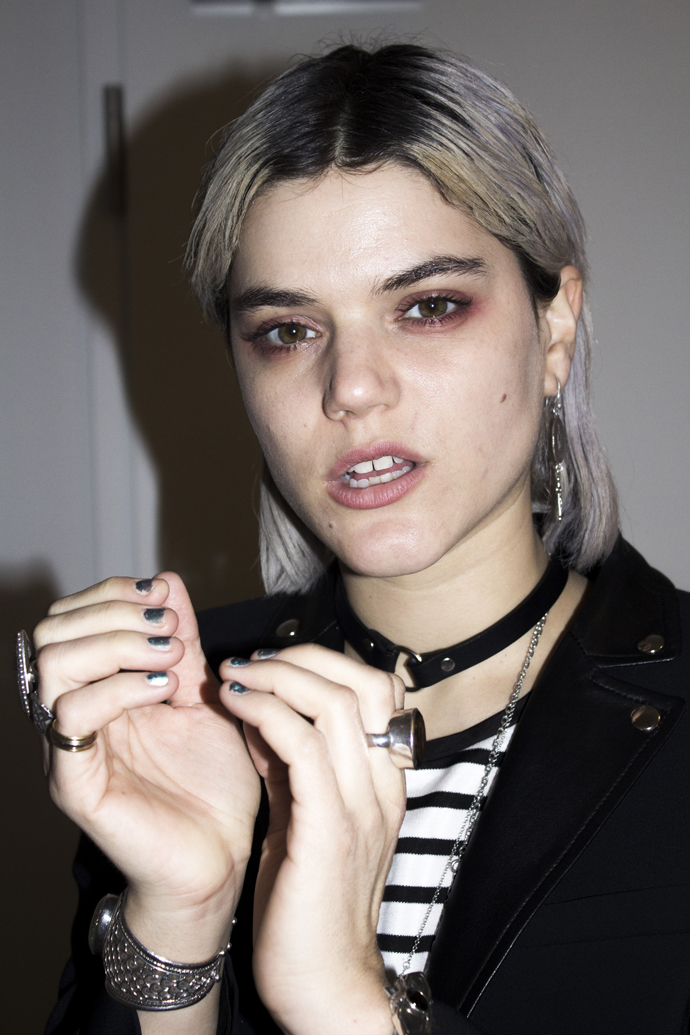 KALTBLUT: Did you get much support?

SoKo: No because it was such a need that there was no way around it, I was too strong willed not to do it. I was never like “This is too hard I’m not going to do it”, I just had to. So I worked a lot and taught myself how to play instruments and feel fully independant and basically be able to make art on my own and then waited for other people to bring me into their own projects if they wanted to. 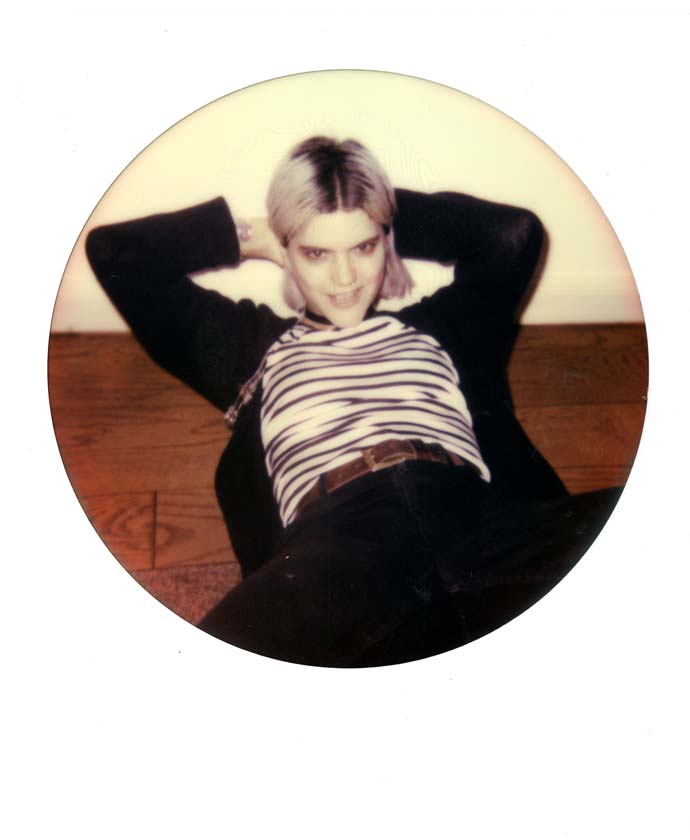 KALTBLUT: So I guess acting wouldn’t be something you’d get into doing again?

SoKo: I do it now very sporadically, basically on my own terms. I don’t want to have an actors life. I don’t want to like, go to auditions and work for nothing. But if projects come to me and it’s something worth turning my music brain off for a second then yeah, I’ll do it. I direct all my videos and do all my art work, and I have so much fun doing what I choose to do, so if I’m going to choose to do something else then it has to be really worth it.

KALTBLUT: Is there anything new coming up?

SoKo: Yeah I’m going to do four movies this year. One is from the Coulin sisters, they’re French sisters and they did a movie called ‘17 Girls’ that was really beautiful. So I’m doing the lead of their movie which is about PTSD (Post Traumatic Stress Disorder). It’s about two girls and they’re best friends coming back from war, and they’re in a decompression chamber doing therapy, talking about their experiences. I’m really excited for it. I’ve started to do a little bit of training for it every morning. So when I come back off tour in a month I’ll start training like four or five hours a day.

KALTBLUT: Your new album was mainly recorded in LA, is that right?

SoKo: I started recording it in Paris on my own in random studios, but it was becoming way too expensive because I was producing it by myself, I couldn’t afford it. So I went to LA for work and was supposed to stay for like ten days, but then met Ross Robinson and he was like “I totally get your record, I want to do it. I don’t want to be that type of producer that imposes a sound on you, I want you to experiment and you know you, you know what you want it to sound like. I just want to accompany you in making this new sound.” And that’s exactly what he did! He was patient and was like, “We should start in three days”, I told him I was totally broke and he was like, “Well you can move in here!” So I moved into this four stories tall house on Venice Beach, with the studio right on beach. Right on the boardwalk. So it was pretty insane! He’s like the kindest man, and so passionate. He pushed me to play all of my instruments and gave me so much confidence. He was my number one supporter. 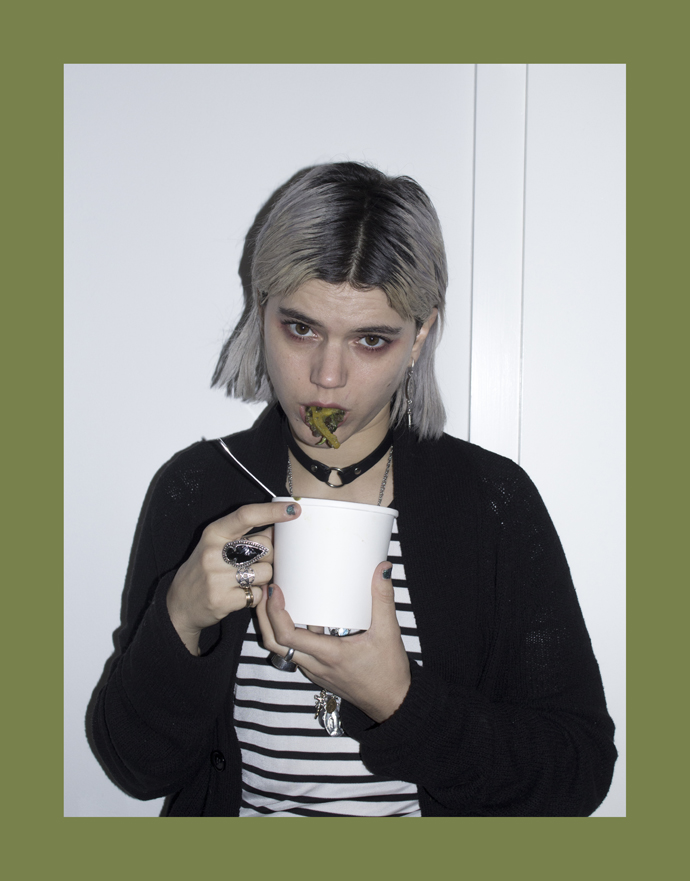 KALTBLUT: How do you think this recent album has changed since the last?

SoKo: The last album there was this kind of premises of what it would become, because there were already a lot of drum machines, a lot of instruments. The first song on the last album was also called ‘I Just Want To Make It New With You’ and that was the first song I wrote on bass, and then most of this new record I wrote on bass, so it was starting to get to that, but it was the baby version of what I was trying to do with this record. Which was more grown up, matured and also blossoming into a full band sound. There’s a lot more energy on this record so I feel a lot less alone, and it feels less depressing. I just wanted to feel better through this record and transform into being the person I wanted to be instead of this victim of what life is imposing me to be.

KALTBLUT: How do you think your image has changed?

SoKo: I don’t really care about things like that. We all change. I’m going to be 30 this year, and I definitely feel like I’m getting to that moment of big life changes. 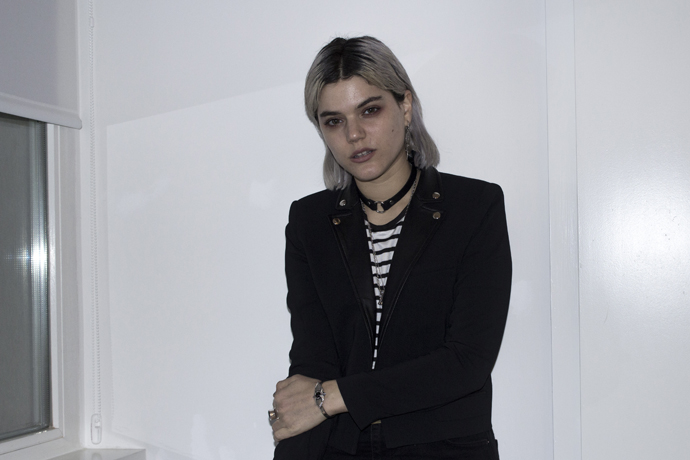 KALTBLUT: Are you going back and forth from LA at the moment?

SoKo: Well I live in LA, but I’m just over in Europe for work.

KALTBLUT: Do you think you’d ever go back to France?

SoKo: No. I mean not right now. I feel very happy where I’m at. I have such a good group of people at the moment, I stay at my best friends house when I want to. It’s just such an easy thing, you know. I just feel like I’m constantly inspired and it’s really easy to find this awesome creative flow. I never sleep. If I get like five hours of sleep it’s fucking luxury. I’m always making different things at the same time, like right now I’m finishing the editing of my video, finishing my zine, going on tour, promoting my record, preparing for a movie. I feel fucking reckless and tired! [Laughs] 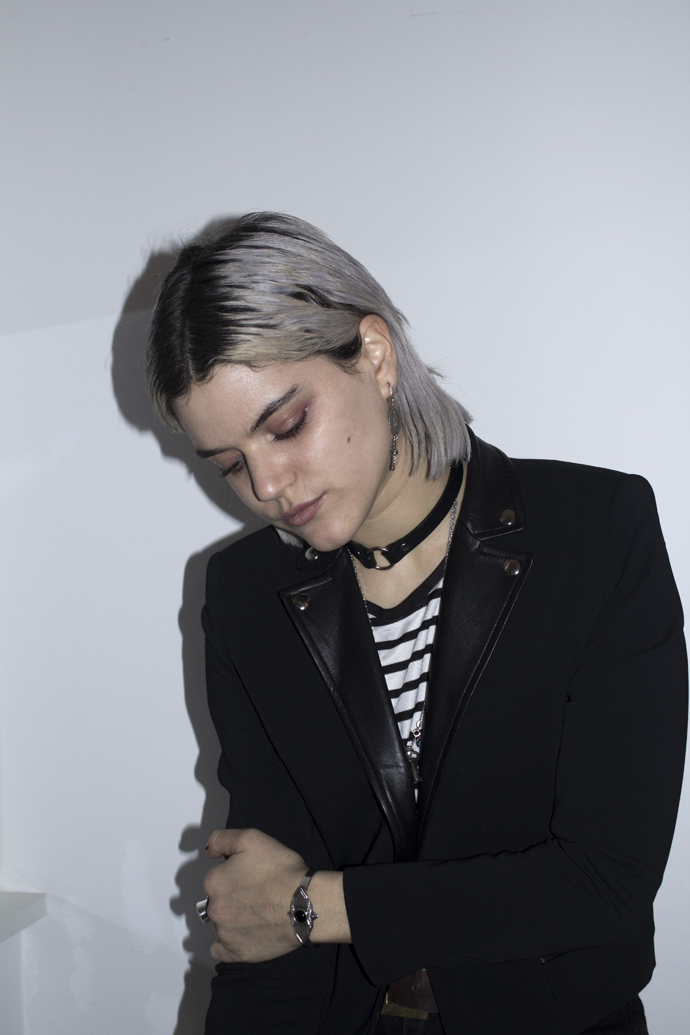 KALTBLUT: ‘Temporary Mood Swings’ is this something you think you suffer from?

SoKo: It’s mostly just about the ideas that have been put in my head since I was a kid. You need to be a steady human all the time. People who don’t express their fears and their moods, and their discontent actually scare me! Like I really just, I’d rather have an argument with someone. Not a fight, but just exchange ideas and communicate other than people not expressing anything. Even if it’s just “I’m not happy, and this is wrong” instead of having it in your head and wanting to explode. Or implode. That’s how I write, I need to empty my head out. I dump all of my thoughts onto paper.

KALTBLUT: So the album is a dump of your thoughts?

SoKo: Hey! You just take it easy with the dump crap, okay? I was talking about the proverb not the noun. Bitch.

KALTBLUT: So what’s this about your super pledge? Vintage shopping, “sweating with SoKo”, a day in Disneyland, “rent a bride“, what made you decide to do this?

SoKo: Well I’m seriously broke from just making this record, I’ve put every single penny into it. This Europe tour is costing me money that I just don’t have. Which sucks when I just want to play music for people. I don’t have time to do some kind of side job, so I needed to do a pledge simply to be able to produce my records and pay for my PR, for my songs to go on the radio. We just wanted to  offer things that are fun and you could have a real experience. Especially for the fans. We did normal stuff like signed vinyls and whatever. I used to get weird requests like “Will you marry me? Where is your favourite vintage store?” so we were like, let’s take all of those things and offer it! 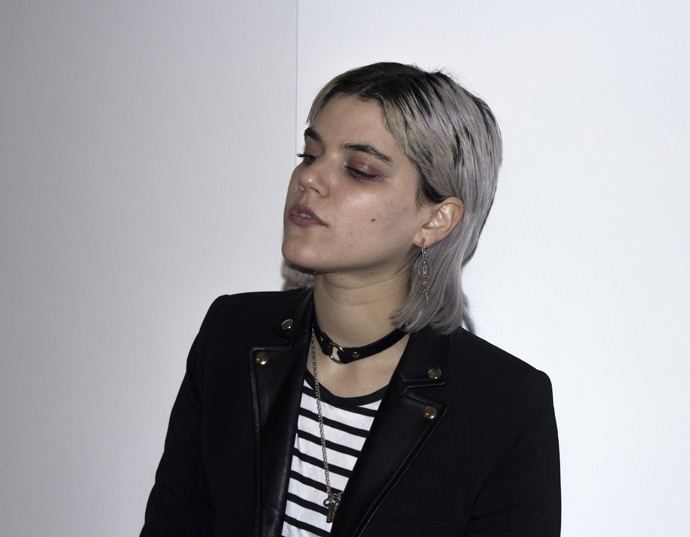 KALTBLUT: Did you get any good offers?

KALTBLUT: Your last album you “thought you were an alien”, do you still think the same?

SoKo: Yeah! The opening track for this album is called ‘I Come In Peace’ just to make more alien references. I love anything that has to do with space, the universe, dreams and weird shit.

KALTBLUT: What’s next for Soko?

SoKo: Well just making those four movies, making more music videos, that’s it! Taking it day by day. Working my arse off. Trying to have as much fun as possible, meeting new people. Doing it all! YOLO!

SoKo: You know that song ‘We Might Be Dead By Tomorrow’? That whole YOLO thing came out, and I was like “Man, my song is like the poetic version of that.”

SoKo is currently on tour! Click here to see when she’s playing near you. 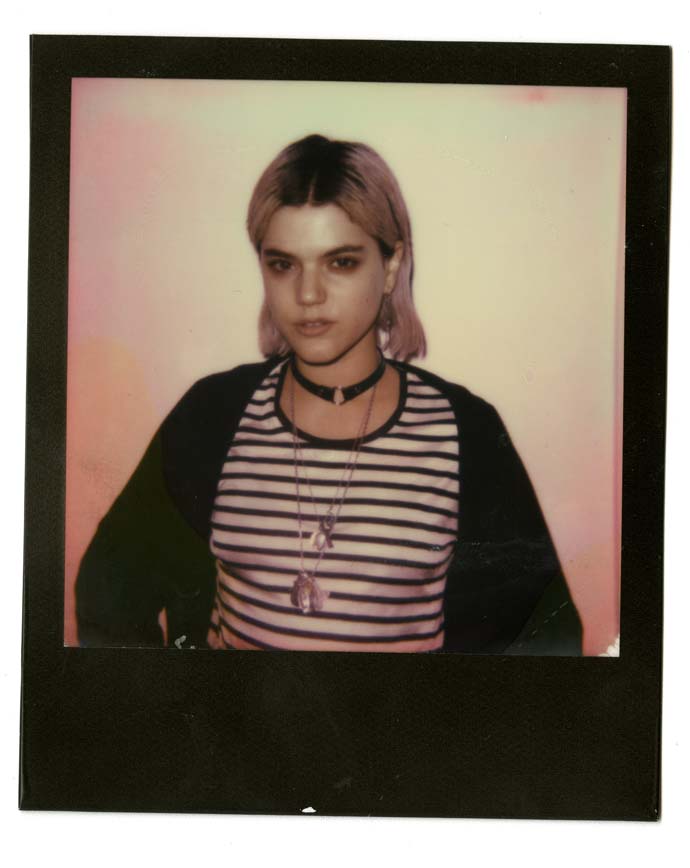 We have a photo of SoKo to give away! If you’d like to enter just send an email to nicola.phillips@kaltblut-magazine.com. Special thanks to Impossible for supplying us with the instant film!

Interview by Nicola Philipps – All Pictures by Lauren Raaijmakers www.laurenraaijmakers.nl 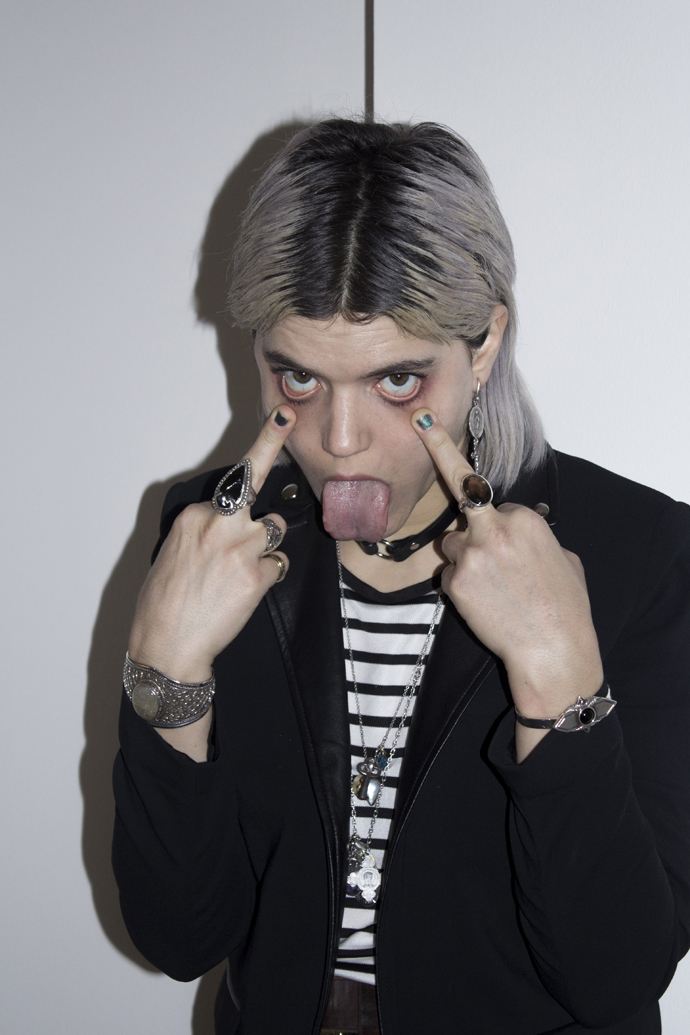 ‘My Dreams Dictate My Reality’ is out NOW! itunes.apple.com/us/album/my-dreams-dictate-my-reality/id963817254
Contact: