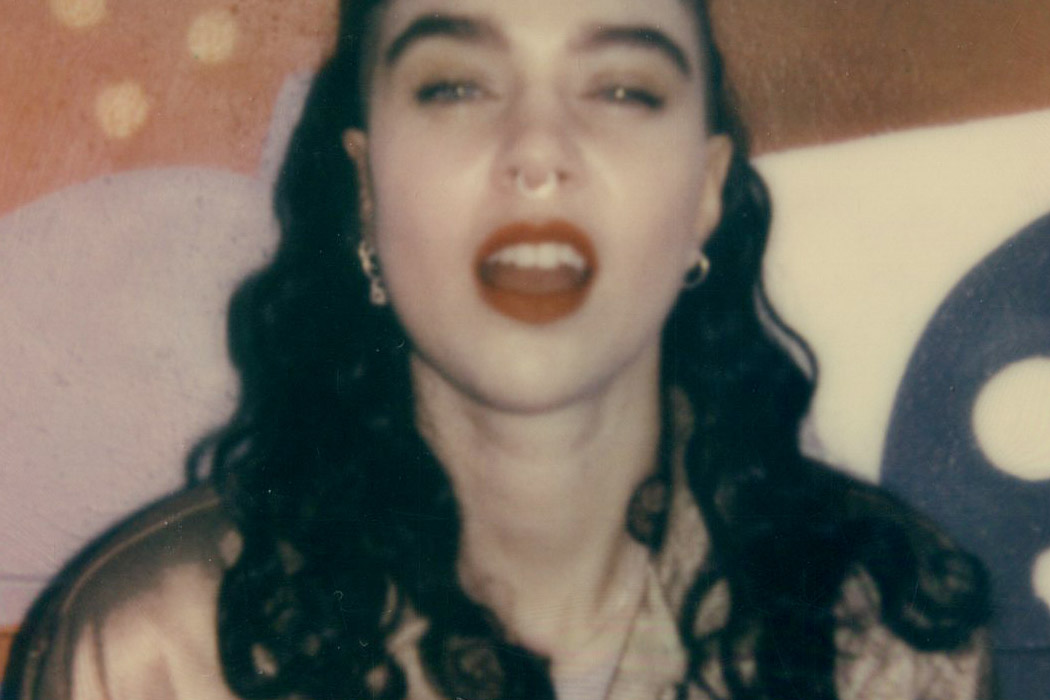 Sound of the Week: Beatrice Eli

An interview! On my way to the Berlin Festival I was already living the fantasy. There were so many acts that I couldn’t wait to see: Kelela, Roisin Murphy, Tiga, Gus Gus ( just to name a few), but I was ready to see for the first time, Beatrice Eli. It was a big surprise for me as I had only heard her album for the first time a couple of weeks earlier. Since then, Die another day has been playing non stop. 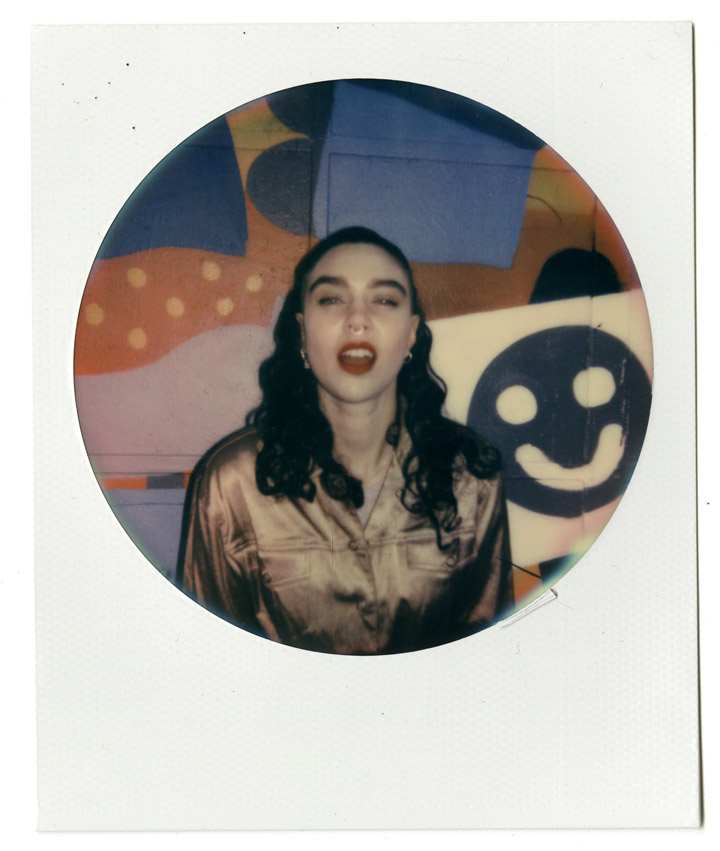 I can’t get enough of it! The song is so much an honest piece of work, and the album itself is really like a patchwork of different vibes. I was looking forward to the show and before that, I met up with Beatrice herself.


KALTBLUT: What was it like growing up in Stockholm?
Beatrice: Good, I guess! [laughs]

KALTBLUT: Nothing special?
Beatrice: I grew up in a suburb to Stockholm, so I think that it influenced me a lot. Like every city has different cultures. There wasn’t really sub-cultures, but when I met other people from the other side of Stockholm there’s always something a bit different from what you experience that had an impact on me, but in what way I’m not really sure! [Laughs] But I’m proud of where I grew up. I met a lot of different people where I grew up, which I appreciate. 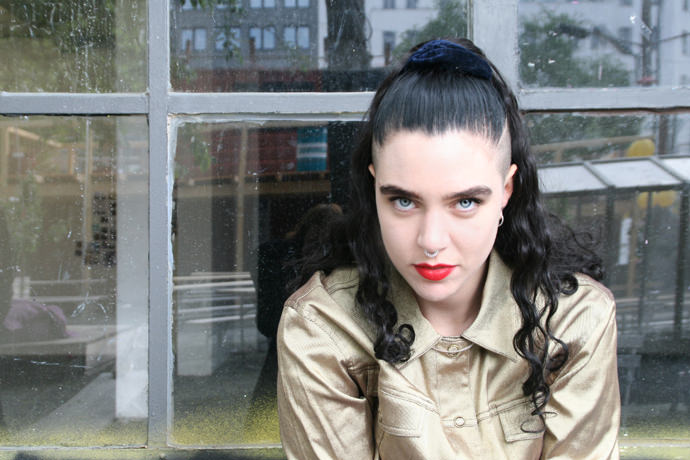 KALTBLUT: Did you grow up around music?
Beatrice: Both yes and no. My parents liked music so they always played music at home. But they would always play the same records. They played things like Stevie Wonder.s Songs in the Key of Life. I mean there was always music on, it was just the same each time! And my mum loves to sing, she sang in choir and stuff so it’s a part of my family but they aren’t music nerds or anything like that.

KALTBLUT: With an album name like Die Another Day, are you angry at someone?
Beatrice: I’m not telling someone they should die another day, [laughs] it’s more about me. I think when I was making the album it was more about struggling and not feeling so good about life. So I think the theme for the album has a lot to do with convincing yourself that it isn’t going to feel this bad. Like in the future, it isn’t going to feel that bad. So I think that’s why it worked with that title. Also I think it’s funny because it’s a Bond movie. And Madonna sang the track for it. It’s also really weird naming my album that, so I like that. 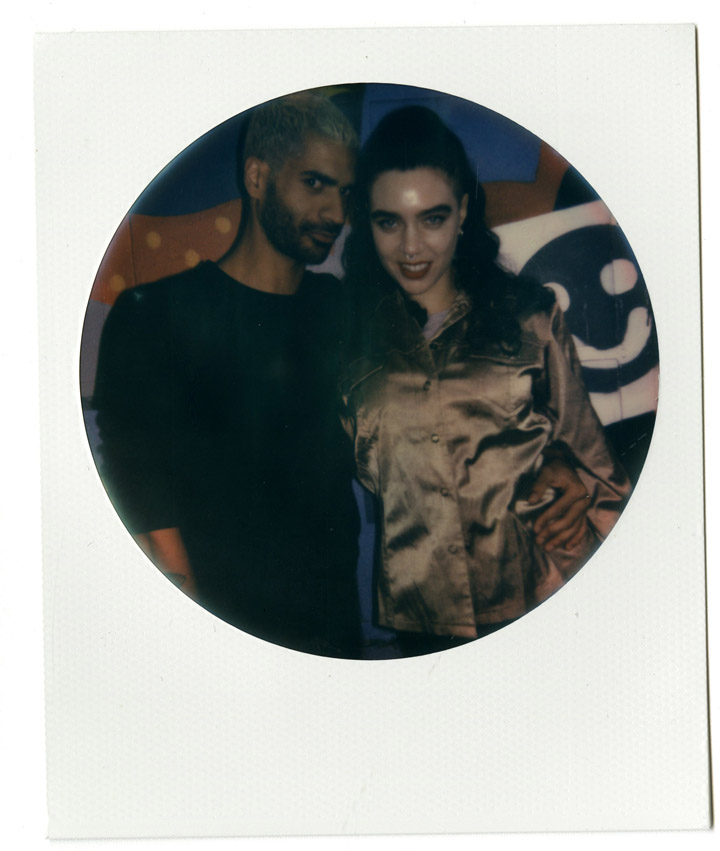 KALTBLUT: Your video for Die Another Day looks pretty hectic! Did you enjoy filming it?
Beatrice: Yeah it was really fun! It was filmed here in Berlin! We were all Swedish, and a lot of the guys had already lived here a long time and knew a lot of people, so it felt really natural to film it. We were talking about how to shoot the video and decided it should just be us friends hanging out and we thought, “where could we film it where isn’t Stockholm?” and we just thought Berlin! It’s nice there, it’s warm, the food is cheaper [laughs], the people are nice and the vibe of Berlin felt right for the video so we just booked tickets and came over!

KALTBLUT: So you knew the city already?
Beatrice: I’ve been here I think three times before that, but only really short visits. But I love Berlin. Everything I see I love. The vibe is great!

KALTBLUT: Many of your songs touch on sexuality, sex and feelings – have you always been so open about these topics?
Beatrice: I don’t think I’m that explicit. Party In My Pants is of course a song about masturbating, but it was a conscious decision to do it in a fun, quirky way.Other than that I’m just describing relationships. I think I don’t know how to write in another way. When I try not as personal, more general, it doesn’t turn out that great. So I’ve stopped trying to be dreamy, it doesn’t work for me. I like to be direct. Because that’s what makes me excited, that’s what I find exciting. For example Trust Issues, that was a song about my then girlfriend, when I was acting so jealous. So I was going to meet her in ten minutes and I just thought about this song and I put it down and played it on the piano. Then we met and had this huge fight and blah, blah, blah. But you know, that just needed to come out. That was exactly I was going through. So for me reading through that and hearing that, I don’t know if it helped with my jealousy, but it somehow was a great reward for me to describe something emotionally in a song. And then hopefully other people will relate to the song too. 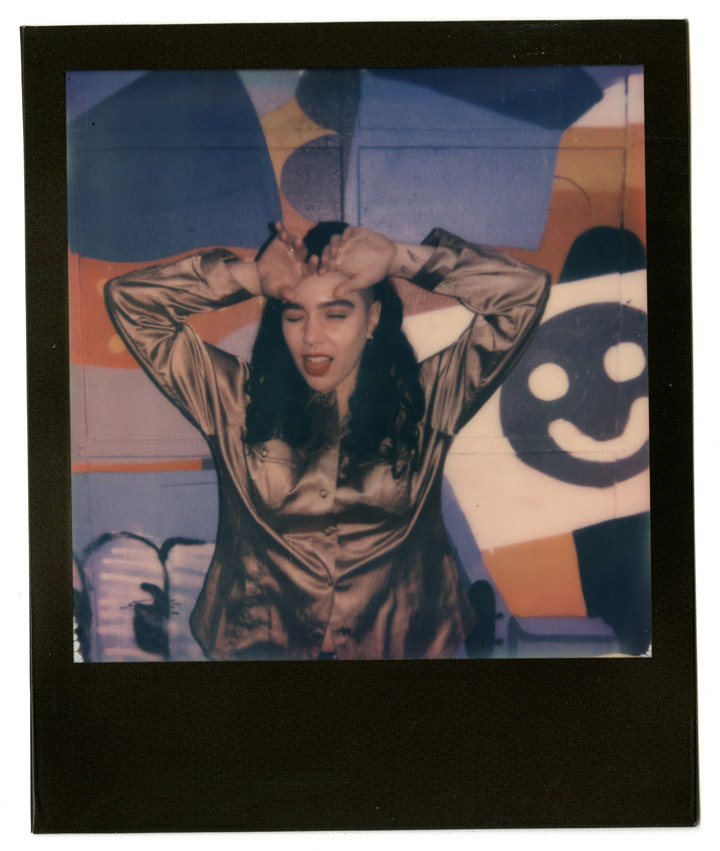 KALTBLUT: You can tell the way you write very direct. For me I felt I could identify, and often thought “that’s so true!”
Beatrice: That’s exactly what I want. For you to feel my pain! [Laughs]

KALTBLUT: Are your parents supporters of your music?
Beatrice: Yeah they are! I was super scared before they heard the album. I sent them a copy of the album when it was finished and then we kind of didn’t talk for a little while because I think it needed to sink in. But I think I’ve gotten so much support in Sweden, like the newspaper that my dad reads every morning has written about me. So I think where they’ve seen me written in a different context to what they’re used to, they began to support me. So we are okay! I mean my dad called me to say that he’s tired of people asking him about me masturbating! And he just said well it’s something natural, so I guess in a way it opened up our relationship a little more. But it’s so scary! To be so honest.

KALTBLUT: Do you find it easy to write songs?
Beatrice: It varies. When I wrote this album I had periods where I wrote a lot and then I had periods where I went to the studio every day and I just sat there overthinking, with nothing coming out. I’m super manic. I get really excited and then just turn the other way. But I feel more creative when I’m in this more excitable state. At the moment I’m writing more songs and finding it much easier to do. I’m not writing at home all the time. If I’m on the subway I’ll come up with a line and I’ll make sure to write it on my phone. But I only write in the studio now with someone else to help me not write in this negative, self critical way.

KALTBLUT: Did you work with anyone on your album?
Beatrice: Saska Becker and I produced the album together. We build kindof the same sound landscape together. He doesn’t write, so if I only work with him I write everything. Then I worked a lot with another guy called Daniel Ledinksy. He’s been like my mentor, we met five years ago and he’s taught me everything I know about songwriting and the music industry and all that stuff. He’s been really important to me. I felt he really understand how important it was to be honest about my sexuality. He gave me the confidence to make these personal lyrics. Then there’s Rudie who knows all of of us, she sang on The Last Time. But our voices are so similar so no one asks who she is! Everyone thinks it’s me! But she sings the second verse in that song and she wrote Equality with me. She’s also one of my biggest inspirations when it comes to music. If Rudie or Daniel suggest I change something, they’re normally right! And also it always comes from the right place. We always split equally when making a song so it gives us all a chance to make the song sound as great as it can be. It’s not about ego or anything like that. It’s scary to think about working with people I don’t know! I’ve tried before writing with people I don’t know but I don’t like that! 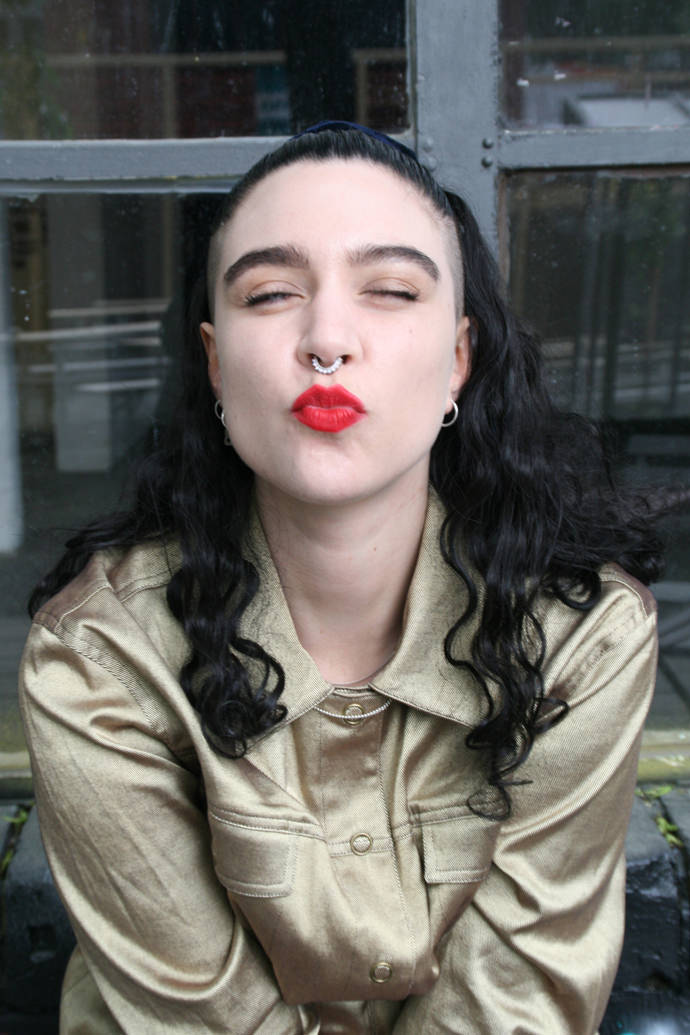 KALTBLUT: Have you ever helped write songs for anyone else?
Beatrice: I’ve tried doing that, but every time it ends up sounding too much like me! Too personal. I’ve started to think about writing for other people now and take more inspiration from other people’s lives, but before I had so much work on the album. So hopefully I’ll just travel around the world and write for Madonna! I don’t know.

KALTBLUT: Do you base your sense of style around anyone?
Beatrice: Right now I’m really inspired by young girls who are maybe 13/14 on the street with like, the crazy hair. Like a punk vibe but they’ve done something with it that they haven’t seen before. That makes me feel really inspired because I wasn’t like that when I was their age! I mean, I’m 28 and I’m wearing a scrunchie [laughs] I should’ve grown out of that already! I just think they’re so cool though. It takes so much guts to dress how they do. I was never a part of like queer activists, so maybe I just want to be a part of a group! I mean I love the whole end of the 80s/90s style. Everything was so on point. I love that sort of femme style, that a lot of the big singers had around that time. So I’m doing a bit of that on my live show. Like I’m half naked. Which isn’t what I normally do! 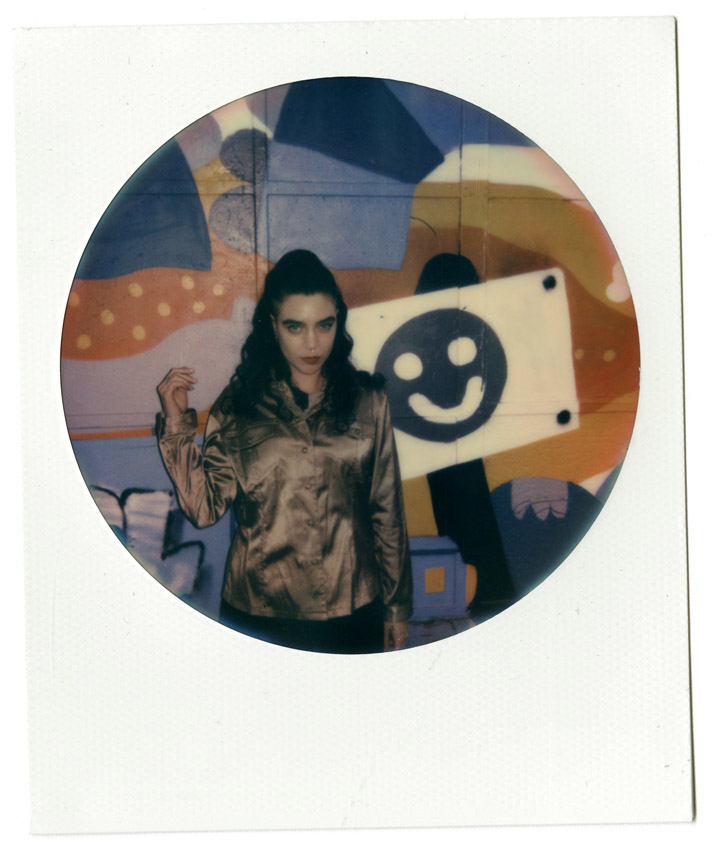 KALTBLUT: Who has greatly influenced your life?
Beatrice: I think I was looking for role models a lot as a young a person and now I continue to do that with people I meet when I work, or friends or just other artists. But as a young person I didn’t feel that influenced by anyone! I think that it’s encouraged me to be the person that I am now.

KALTBLUT: What are you the most proud of?
Beatrice: I think I’m proud that I kept being this idiot who didn’t stop making music. Even if I didn’t make any money, I mean I still don’t! But back then I wasn’t signed, there wasn’t a hype, but I still continued to make music. I tried so many different sounds, because I never had that one influence. So I tried and tried until I liked the way I sounded. I was on a journey. So after three years I finished the album and that I’m really proud out. That I never stopped being an idiot.

Of course, Beatrice totally had me even before the interview, but after chatting I was feeling pretty much like a groupie. The show was a total blast. Beatrice totally killed it and she knows how to work to that crowd! Berlin, I’m telling you , if you missed her at the Berlin festival, she will be back for the Midsommar festival June 19th – June 20th. Make sure to grab your tickets and go see her live – you won’t regret it!

Die Another Die is out now! 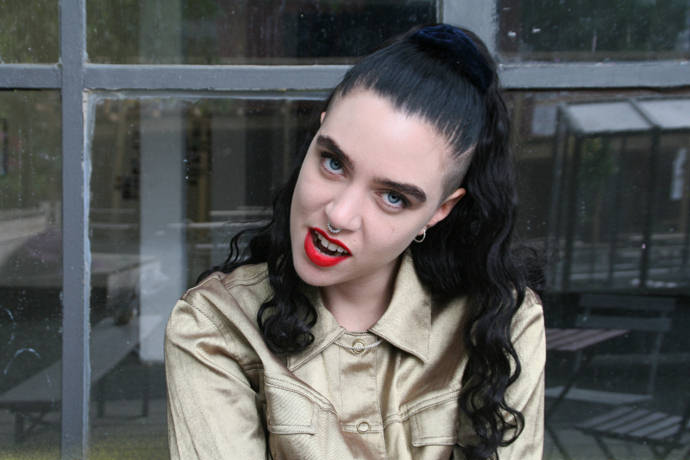